Wizards, Warriors, and a Word From Our Sponsor

At Eight-Ball Apartments Bob emerges from behind his couch, telling Dot and Enzo to go away and they will give away his hiding place. They are confused as to why Bob's telling them to go away. Bob freaks out and screams that "He's coming!". It turns out to be Mike the TV, who goes into a rapid set of infomercials. Bob, about to burst, threatens to dismantle Mike with Glitch. Enzo asks why he doesn't just turn Mike off and Bob tells him that Mike's remote control ran away. Dot tells him can you blame it and gets Bob to calm down, but at that moment the system voice announces a Game Cube is dropping.

The Game drops right over Bob's apartment, trapping Bob, Dot, and Enzo with Mike the TV. The Game is a multi-level strategy Game named A Dungeon Deep. The group reboots, Enzo as an elf, Dot as a wizard, Bob as a thief, and Mike as a warrior, but he's too weak to lift his sword. While they're chatting about their roles and how they're stuck as they are, the User's team charges past them and into the dungeon.

Bob, Dot, and Enzo try to ditch Mike, but they can't get into the dungeon without him. He pulls a "heroic" stunt and accidentally manages to break down the door. The door has become a makeshift raft and the four teammates find themselves floating down the River of Eternal Imprisonment toward the Pit of Total Oblivion. They manage to get themselves out of their predicament and into the next level.

What ensues for the next 65 levels is constant bickering between Mike and the trio. They try to get as much done as possible without Mike's help because he is generally being very annoying. When the group reaches level 66, Mike starts to prove his worth by ingeniously blowing out the candle that is responsible for projecting a shadow monster onto the dungeon wall. They ask how he figured it out and he tells them from a movie name 'Dr. Goldsmith Vs. the Shadow Monsters'.

By the end of the level, they all finally realize that the Game can only be won with teamwork.

In the final chamber, Bob, Dot, Enzo and Mike each face a dark form of themselves, managing to defeat them before the User's team gets into the chamber. Though the chalice narrowly escapes being claimed by the User's team, Mike claims it and holds it triumphantly over his head as the Game Cube leaves.

After the Game, the former teammates regroup at Dot's Diner. Bob, Dot, and Enzo apologize to Mike for treating him so poorly. In retribution, Mike gives the trio a commercial break by temporarily turning himself off. 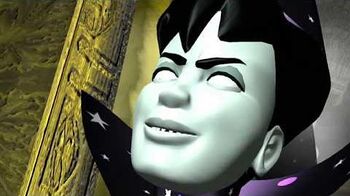