Where No Sprite Has Gone Before

A Game Cube sits in a system with large modern buildings with green and gray sides. A mountainous landscape surrounds the city, there is no visible Energy Sea in the Spectral System. A male System Voice announces 'Game Over'.

'AndrAIa's Log. Game date unknown. We've entered a new system with the hope of finding mainframe. Once again .. failure. With each passing system, Matrix grows more despondent, and I fear if we don't find Mainframe soon he'll give up all hope of ever finding home. AndrAIa out.'

Behind AndrAIa and Matrix an explosion hits and up in the sky a group of shimmering orbs are flying away from a group of Superhero sprites on zip boards and some without any means. They are firing at the shimmering orbs. Matrix pulls out his gun but they are both unsure who's side they should be on. Then out from the distance appears a sprite that looks very much like Bob, except for a gold mask over his face. Matrix is surprised. One of the female heroes shouts out, 'Rob look out!' Matrix thinks it's Bob. Gigagirl & Email are ordered by Rob, to pull a 'net maneuver'. Gigagirl throws Email like a spear towards to of the orbs, then he suddenly opens out into a net and captures them, changing into a large balloon in the process. While the Bob lookalike gives a standard hero retort to his buddies Matrix taps Rob on the shoulder. He turns around to face him, activating a light saber. AndrAIa, Matrix and Frisket stand their ground. The Bob lookalike introduces himself as Robert Cursor as leader of the Hero Selective. Matrix introduces himself and tells Cursor that he comes from the games. Powerlock, a muscle bound sprite tells Matrix that no one is to play the games because the User must win. Pixel, tells the group that the 'Spectrals' will be returning soon. Cursor tells the group to go back to the Hard Drive. Matrix asks Cursor whether the system has a guardian, Cursor is not familiar with the term.

At the Hard Drive, a cave decked out in computer consoles, tables and various electronic machines, Email releases the Spectrals into a holding cell surrounded by a forcefield and Cursor tells Matrix that the Hero Selective is purposely damaging the system. But it is the only way that they can get the Spectrals to listen to their demands. He explains that the Spectrals although they look small and weak compared to the superheroes, they are in fact being controlled by the Spectrals. Powerlock tells the Spectrals that they betrayed the Hero Selective AndrAIa becomes very protective of the Spectrals. Cursor explains that they were once like the Spectrals, but because Spectrals cannot Reboot the system needed defenses. They discovered a way to convert Spectrals to sprites. They volunteered and their mission was to 'Seek out new game cubes and new applications, we boldly went where no Spectral had gone before.' Now they want to go back, but the Spectrals tell them that they rejected the spectral state and were seduced by the flesh. The Spectrals don't want the sprites to change back they must defend the system from games. Pixel comments to the Captain that the Spectrals have 'some logical points'. Gigagirl tells Pixel, 'Logic? How can you talk about logic? We're talking about our lives here.' Powerlock agrees.

Standing by a large keg of alcoholic beverage is Cold Boot, a barman with a Scottish accent. Matrix readies for a drink and tries to sit on Email, who has changed into a chair. He drops his glass and makes his way along the bar where Gigagirl suddenly changes from being a short and pleasant girl to a large muscular Russian a good foot taller than Matrix. They discover that the Spectrals have gone and AndrAIa tells the group that she let them out. She tells Cursor that 'no one deserves to be hunted and caged.' She walks out but is stopped by one of the female heroes who multiplies herself several times and surrounds the group but AndrAIa has gone. A cat-like female tells the rest of the group that they should go on a hunt. The heroes ready themselves and leave. Matrix tells them that he's with them but against the hunt.

Outside the heroes fly towards the city.

Matrix tells AndrAIa to come out of her hiding place on the roof, she tells Matrix that she let the Spectrals go because she wasn't ready to take sides. Matrix is missing Bob, he considers the possibility that Robert could be Bob because the web could have changed him. After AndrAIa and Matrix have an argument over whether or not Bob would condone the heroes' actions, AndAIa decides to side with the Spectrals and leaves to look for them. After she finds one near the system's Principal Office, he asks why she has come. She convinces him that she wants to help them. Suddenly a new tear opens in the system, AndrAIa offers to help and follows a bunch of Spectrals.

Back at the Hard Drive, the heroes return to Matrix. Pixel reports of the large tear which could crash the system. Powerlock tells Matrix that if the system goes down he and his 'little witch' go down with it. Matrix puts his gun to Powerlock's throat and tells him that his problems end now. Copy Girl duplicates herself and stops Matrix from firing. Cursor explains that only the Spectrals can fix tears in this system.

At the system's Principal Office AndrAIa is trying to sort things out. One of the Spectrals tells the rest that it is a trick to bring down the system. She routes a path around the section so that the Spectrals can carry out the repairs necessary. An alarm goes off and a floating globe shows that tears are opening everywhere. The complaining spectral tells the rest that she is going to destroy them all and disappears out the door. The tears in fact began after the first game. AndrAIa asks about one of the tears, the spectral asks if she wants him to take her there, she says, 'Make it so.' They head out.

Back at the Hard Drive, Matrix tells Cursor that he reminds him of Bob, Cursor replies that he's not Bob but Matrix can trust him. Then they start talking about the system error, Cursor explains that the sprites would never permanently harm the system. Matrix carries out a system scan. Matrix tells Cursor that he has to get his team together to hunt for something worse than Spectrals.

On a Zip Board heading for the tear, AndrAIa tells the Spectrals that protecting systems is what Matrix and herself do best. It's their 'Prime Directive'. They locate the tear and head towards it. AndrAIa pulls out a tricorder and scans the tear. The Spectrals surround and fix the tear. She tells the Spectrals that someone created the tears to destroy the system, The heroes turn up and tell the Spectrals that they have a virus in their midst, and the tears start here. Cursor tells the gathered group that there are no viruses as part of the hero selective. Pixel tells the Spectrals that virals would never take prisoners. The Spectrals tell them that they have virus checks in place. Matrix says that the virus must have a cloaking device. The arguing Spectral attacks Matrix when he activates glitch to scan for a virus in close proximity. A fight takes place between the Spectrals and the heroes. Pixel uses a nerve pinch on a spectral. AndrAIa knocks MultipleGal and her clones over. Feline is trapped in an energy shield by the Spectrals. Matrix is firing when he shouts 'Enough!' Matrix and AndrAIa bump into each other and Matrix asks if she's still mad at him. She kisses him.

Cursor heads after a Spectral, and tells him that they must stop this as they can only defeat the system by fighting together. The Spectral agrees. The fight ceases. The arguing Spectral disagrees and Matrix tells the group that it is a virus, he fires at the Spectral Virus until Booty shoots it with his freeze vision and it turns into a frozen crystal. He begins to recover and tells them that his brother is still free. Pixel uses her neck pinch again. The chief Spectral tells the heroes that he has sent his team ahead to the Principals Office. The earth shakes. They discover that the shakes are emanating from the Principal Office.

Matrix kicks down the door and Frisket is barking at Powerlock. Powerlock tells how he followed some Spectrals back to the Principal Office and found them opening new tears. Matrix tells Frisket to sniff the dead Spectrals, but then he starts to growl at Powerlock again. Matrix discovers that Powerlock is also a virus but he pulls out a large bazooka, and tells the group that if he presses a large red button with 'Do Not Press' written on it the entire system will crash. The chief spectral attacks Powerlock and the bazooka fires knocking an awning down onto Cursor who pushes Matrix out of the way. Matrix fires at the virus and the only thing that hits the floor is his stogy.

While AndrAIa starts to arrange repairs, Matrix approaches the dying Cursor, 'System, Out of danger?' He is deleted. AndrAIa tells Matrix that he wasn't Bob. Matrix agrees and tells AndrAIa that he was a friend.

The system voice announces an incoming Game. The Spectrals and heroes agree that there will be peace, 'If not now, in the Next Generation.' The game cube descends on Matrix, AndrAIa, and Frisket. 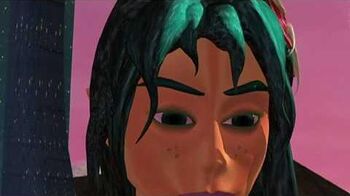