Bob, Dot, and Enzo are in an Alien Combat Game, which takes place amid ancient ruins. The sprites have rebooted as chrome robot-like versions of themselves and their goal is to defeat a deadly laser-shooting User. The User is too fast and too deadly for the sprites to even hit.

On the exterior of the Game Cube, Hack and Slash are transporting a strange-looking device to the Game Cube. They argue a bit as to where they should put it on the Cube, but drop it in terror when Megabyte appears on a VidWindow in front of them. The bots and Megabyte talk about the strange machine, and it is revealed to be a Leech Command, designed to suck energy out of Game Cubes. After an argument about buttons, Hack starts the machine and the energy drain begins, sending the Cubes energy down a power wire.

Within the Game something strange happens. The Game slows down to almost a crawl, but the sprites still function at their normal speed. Enzo takes advantage of the situation by using his gun as a baseball bat and launching a laser the User shoots back at it, winning the Game. Enzo is thrilled he won a Game, but Bob and Dot are worried about the game speed problem. Dot calls Phong to talk about it, and learns that there was an energy drain. The CPU General calls to inform her that the Mainframe Archives have issues as well. Dot, Bob, and Enzo head to the Archives and, after going through many levels of heavy security, the group finds out that the archives lost energy during the power drain and almost lost the security field.

Somewhere below the city, Megabyte's troops are camping out in the sewers with a large Energy Drill. A viral binome informs Megabyte that they almost "pulled it off" and that they only need a little more energy to break through. Megabyte commands Hack and Slash to set the leech command to maximum drain on the next Game Cube that hits. He reveals that he wants to get into the Mainframe Archives.

Bob goes to check up on Megabyte while Dot stays behind to help re-align the Archives. Frisket bounds onto the scene and soon begins to lead Enzo on a hunt for something Frisket can only define as being suspicious by growling. The pair soon find themselves in the bowels of Mainframe.

At the Silicon Tor Megabyte is putting together a device that looks suspiciously like a massive mechanical circle.

As Bob heads toward the Tor a Game lands. It is a Basic Combat Game and Bob immediately starts firing rounds from his machine gun. Hack and Slash quickly set the Leech Command to maximum and start draining energy. Before long, the Game starts to slow down again and it gets so volatile that the game begins to crash. Phong tries to send some energy to the Game. Before he can the system voice announces "Game Crash, Manual Restart". Another Game Cube lands on top of the crashing one and the Games merge. The Game that is landing is a Dinosaurs Game, so the Merged Game contains flapping air planes and dinosaurs with cannons for noses. Also in the Game is Megabyte. He and Bob work together and though Bob has to save Megabyte from a tar pit, the Game is won. Bob heads for the Tor, nanoseconds after he is informed by Dot that Megabyte has stolen an old Gateway Command from the Archives and kidnapped Enzo. Dot says she'll meet him at the Tor.

Enzo is put in a harness and is to be used to test the Gateway Megabyte is creating with the old command circuitry to get to the Super Computer. Bunnyfoot installs the stolen Gateway command circuitry and Herr Doktor activates it. Bob and Dot arrive just as Enzo is forced to go through the Gateway and a short fight begins. Hack and Slash grab the Gateway generator and try to fly away but Bob goes in after Enzo. Hack and Slash drop the generator. Just before it shatters into a million pieces Bob emerges with Enzo. Though he is furious, Megabyte lets everyone go because he owes Bob a favour for saving his life in the Game Cube. Now the virus and the guardian are even. 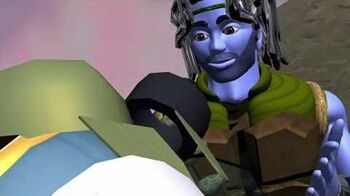