What's Love Got To Do With It?

Flashback: Bob is a cadet at the Guardian Academy. A Guardian named Dixon Green is showing the young Bob how to dispose of Viruses in the Deletion Chamber. A scrawny but menacing looking Virus named Killabyte is today's subject. Bob believes that Viruses can be reprogrammed to do good. Even the Prime Guardian, Turbo, thinks Bob's ideas are radical. "A User made him this way. A User programmed him to destroy, to infect, to corrupt."

While they are talking, Killabyte breaks free. Dixon uses her Key Tool, Glitch, to report a 403, viral upgrade, in progress. She warns Central that the upgrade is skipping a generation. The new virus now has the ability to fly, transfinite power reserves, portal forming abilities, and energy absorbing. The Virus knocks cadet Bob out and kills Dixon by draining all her energy.

Killabyte starts walking toward Bob to finish him off when a circle of energy appears. The skinny Killabyte transforms into the wide-chested Gigabyte, then he and the circular Gateway disappear.

Present time: In the brig, Turbo tells Mouse that Ray the Surfer has heard the Word and is waiting for her to drop the Firewall. Turbo tells Bob that Daemon confirms all his radical theories; there are benign Viruses that can do good. The question of Turbo's key tool, Copland, comes up. Bob asks a CPU Binome where it is. The Binome tells him Mouse did a thorough search of the prisoner, but he didn't have Copland anywhere. Bob hardly believes this, because Key Tools exchange code with their Guardians; neither can be complete without the other, so they're rarely ever apart.

Bob fires a burst of code at Turbo through his icon, driving off most of Daemon's influence. Turbo is not completely cured, but is able to provide information to Bob and Dot. Daemon's function is to provide "unity" to the entire Net. Turbo tells them that Bob is the only Guardian that still has a key tool. He explains that as Daemon's infection grew the key tools left their Guardians, Bob is the only one left who can create portals.

Outside Mainframe, a group of Guardian ships are using a Firewall Disruptor trying to hack the Firewall to gain access to the system. Each time their decoding computer completes a number sequence it comes up with Mouse's symbol, instead of a coded number. The Guardian in charge continues to try. Daecon contacts the hacker Guardian with a hologram. He demands to know why they haven't hacked into Mainframe yet. The hacker Guardian believes there's no way through. Deacon tells him, "That is not good enough. Our Lady has a schedule to keep, I cannot accept failure."

In a medical lab, Phong explains to Dot how Hexadecimal changed from a Virus to a Sprite. The power drain required to make all the Guardian ships go away left her drained enough to leave her vulnerable to a virus-scan by the User. She tried to use the Nulls to shield her, but they ran away when the Game Cube arrived, allowing the User's scan to succeed. Hex lost all of her other powers, but is still able to control Nulls.

A wrestling Game Cube shows how Matrix has turned into a beast without AndrAIa. AndrAIa, on the other hand, is merely melancholy in the Super Computer. Daemon is surprised to hear AndrAIa's statement that love conquers all. The Super-Virus was not programmed for love. Daecon and the others love her, but that's not the same.

Deacon informs Daemon that they can't break the encryption codes blocking their path to Mainframe. AndrAIa tells them that Mouse created the firewall encryptions. Daemon is amazed that Mainframe has both a hacker and a virus working for them. Daemon asks about her messenger, Bob.

Daecon: "I have failed you, my Lady."

As the last word leaves his mouth, Daecon decompiles, and Daemon soaks up his remaining energy.

Dot drives Hexadecimal to Lost Angles in Bob's Car. When asked, Dot adamantly states that she and Bob are "just friends". On the ground, the idea is to gather the Nulls together to bring back Dot's father. But without Nibbles, it doesn't work and Hex wants to give it up. When Dot asks if she would give up if it was her father, Hex makes the startling statement that she was born in the explosion that created Lost Angles.

Flashback: Professor Matrix, after demonstrating that a system has been detected via PINGs, executes the Gateway Command. It brings in a nasty Virus, who declares, "I am become Gigabyte, destroyer of systems!" The revolving Gateway cleaves him in two, creating Megabyte and Hexadecimal. It also triggers the explosion that wipes out the Twin City creating Lost Angles, and converting the Sprites into Nulls.

Present: Hexadecimal says "In a strange way, your father saved my life. Or rather, gave me life. I'll try again, 'sister'." She gathers the Nulls together in a full-sized man shape. It starts talking once Nibbles has joined to make its head. Welman Matrix is able to talk to his daughter, but she cannot touch him due to the energy-sucking nature of the Nulls.

Bob comes to Phong's Office where the old sprite has bad news regarding Bob's medical examination. Bob already knows, the merge with his Key Tool was not completely successful due to the damage suffered by Glitch before the merge. Their discussion is interrupted by an alarm. Phong checks what's wrong. The system is on-line! Mouse and Matrix are going after Daemon to try and assassinate her before she can attack. Mouse knows the firewall codes, so they won't remain a secret once she's infected.

Dot tells her father to rebuild the Gateway and asks Phong to help him. Bob is told to research why its code didn't work, and Turbo is asked to tell her everything he knows about Daemon. Dot says there's only two things they know. "We're running out of time, and you can never trust a Virus."

In the Super Computer, Matrix strides boldly into the throne room, commands Gun to target the woman sitting in a shadow on the throne, but the person turns out to be AndrAIa. Daemon appears and Matrix fires a bullet with her name on it. The time controlling nature of the room slows the bullet down, leaving visible shock waves behind it, but stops just in front of Daemon's face. She takes the bullet out of the air and it explodes, then reforms and she blows on it, causing it to disintegrate. From the curtains, Mouse rushes in to behead the Virus, but her katana shatters as it hits Daemon's neck. Daemon touches the floor and instantly infects them both. Mike walks in and greets Matrix and Mouse by name, and Daemon realizes that she has the hacker that created Mainframe's firewall.

Turbo tries to convince Bob that Daemon must be destroyed, calling Mainframe a failed experiment. Bob points out that Hexadecimal was cured, and still believes that he could have turned Megabyte if given enough time. Turbo laughs and says, "Your faith is astonishing. After what his genesis did to Mainframe's Twin City? After what he did to your partner?"

Flashback: Cadet Bob is holding the dying Guardian Dixon in his arms. Glitch indicates her energy is gone, and disconnects from her as she dematerializes. The key tool floats up, deems Bob worthy to carry it, and attaches itself to Bob's arm, exchanging codes.

Tears have broken out all over the damaged Twin City, now nothing but a small island. Bob arrives via a portal and immediately starts mending them. A hysterical Dot misunderstands his words of consolation as an apology, and initially blames the destruction on the Cadet/Guardian. Turbo and two other Guardians arrive and lend a hand. He asks Bob if he's okay. The flashback ends.

Turbo snaps Bob out of the flashback, and they converse in the brig.
Turbo: "Bob? Are you okay?"
Bob: "Yeah. Just remembering the first time I came to Mainframe. I can't believe how much things have changed since then."
Turbo: "Yeah. Net has grown exponentially. It's becoming impossible to police. In a strange way, Daemon is right.
Bob: "What?"
Turbo: "She's trying to bring order to chaos. Now, isn't that our prime function?"
Bob: "She wants unity. One voice, one way. The Net is supposed to be varied, diverse!"
Turbo: "Maybe it's too diverse."
Bob: "That's the Virus talking. You gotta keep fighting it!"
Turbo: "Ah, I'm tryin'. Why didn't your code cure me, Bob? Why?!" 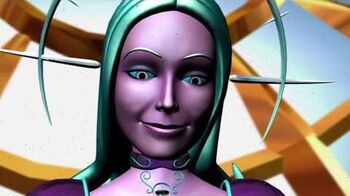