Web World Wars is the tenth and final episode of ReBoot's second season. Taking place immediately after the previous episode, it sees heroes and villains alike uniting to battle the threat of the Web, leading to a surprising change in the status quo.

As the massive Web Portal hovers over Mainframe, battle plans are well underway; The Web War is about to begin. Bob scouts through the city as binomes are herded through the streets of Mainframe, heading for the relative security of the Principal Office and some underground shelters. Enzo and AndrAIa man anti-air guns at the Principal Office, just below the Sub-Sphere. Dot and Mouse prepare for battle at the Armory, while Phong and the CPU Chief monitor the city from the War Room. At the Silicon Tor, Megabyte is preparing the Hardware, a large energy cannon mounted on a modified ABC. Inside the Principal Office, the order is given for the CPUs to scramble. The pilots board their vehicles and head outside in formation.

Web Probes emerge from the portal, examining the massing forces. Bob orders the CPUs to hold their fire - they need all the time they can get to finish preparations. With that acknowledged, Bob calls Megabyte to check on the status of the Hardware. The virus asks the Guardian to come to Silicon Tor, as they are having a small problem; namely, the Hardware needs software to run, and Phong refuses to download it from the Archives. Recognizing Phong's reluctance to work with a virus, Bob reminds the old sprite that they need Megabyte's help to stop the Web, before ordering Phong to download the software.

Next, Bob inquires about the condition of the hardware's power source: Hexadecimal. Megabyte assures him that "she's the same as always", but Bob reminds the virus to look after her - they are siblings, after all. After Bob leaves, Hexadecimal appears, having listened to the conversation; she comments on how well Megabyte works with his arch-enemy, but the former simply asks if she knows the plan. Hexadecimal notes that "there seem to be several", only to be distracted by the sight of the completed Hardware, flying over with glee and asking where she is supposed to sit.

In the armory, Mouse is sharpening her sword as Dot changes clothes in a nearby stall. Mouse is suspicious of the sprites' bargain with the viruses, claiming that she trusts them about as much as she trusts the Guardians. Sensing bitterness, Dot reminds Mouse that everyone has their part to play - Megabyte builds the Hardware, Hexadecimal powers it up, and Mouse herself hacks into the Web and finds the codes necessary to shut the portal. Mouse points out that the viruses are likely to double-cross them, but Dot points out that they have no choice but to work with Mainframe; the Web will destroy them along with the rest of Mainframe. At last, Dot emerges from the stall, wearing a combat outfit and hefting a massive gun, with which she intends to watch Mouse's back as she works to find the codes.

Outside the Principal Office, Enzo and AndrAIa gaze up at the portal, with AndrAIa lamenting that an object of such beauty can also be so deadly. Enzo notes that it must be especially bad if Bob is working with the viruses. AndrAIa compliments the "Guardian" tactic of forming a team and making plans, prompting Enzo to finally reveal that he isn't really a Guardian. Before he can confess, Bob approaches the pair, calling Enzo "cadet" and asking why he isn't in uniform. Enzo is perplexed, but Bob whispers for him to just go with it and asks for his icon. As Enzo hands it over, Bob uses his own icon to download guardian protocol into Enzo's, asking his young friend if he accepts the responsibility of becoming a Guardian. With a glance at AndrAIa, Enzo accepts, prompting Bob to announce that Enzo has now received a field commission to Guardian, First Level.

Amazed and honored, Enzo clicks his icon - now chest-mounted and golden like Bob's - and his clothes change into a Guardian cadet uniform. Assuring Enzo that he has really earned the title, Bob explains that the young sprite will be transferred to the Super Computer for official training. At that moment, Dot calls Bob, reporting that everyone is ready to go. Bob acknowledges and informs Enzo that he will become the new defender of Mainframe if anything happens to Bob; as he flies off, he also asks AndrAIa to look after him. The former Game Sprite tells Enzo that he looks cool in his new uniform, prompting Enzo to thank her...and Bob.

In Giedi Prime, the Hardware-carrying ABC takes off from Silicon Tor and heads into the city. Mouse is at the controls with Megabyte and Herr Doktor, with Dot watching the hacker's back and Hexadecimal preparing to charge the device. As Mouse goes to work, Megabyte asks if she will have the codes cracked in time - Mouse responds that she plans to not only shut the portal, but outright erase Mainframe's location from the Web, making further invasions impossible.

Another round of probes enters Mainframe to scan the CPU forces, straining the already-frayed nerves of the pilots. Eventually, a nervous binome shoots a Web Probe that flies right up to his windshield, causing the rest to scatter - Bob furiously orders the CPUs to destroy all the probes before they can reach the portal. Although most of the probes are destroyed by the amassed forces, the last two fuse together as part of a "piggyback function" - when one is destroyed, the other is sent hurtling into the portal. Moments later, larger, spikier Web Spores emerge and the battle begins in earnest. The CPUs suffer heavy losses and the spores begin attacking the Hardware itself, prompting Bob to demand Megabyte's assistance. The virus comments that he felt the CPUs were coping admirably; nonetheless, he contacts Lieutenant Chauncy, commanding him to send every ABC into the air in support of the CPUs. Despite his shock, Chauncy obeys his master, and the viral ABCs join the fight.

The ABCs' support begins to turn the tide, but much of Mainframe is damaged and Dot's Diner is blown to dust when a CPU Copter falls on it. Hack and Slash hurl a Web Spore into allied fire, and even Bob begins blasting the attackers swarming around the Hardware. Megabyte checks on Mouse, who is working as fast as she can - above, Hexadecimal begins charging up the Hardware with her powers. As Bob joins the others at the floating platform, Mouse finally cracks the Web's code and Hexadecimal finishes charging the Hardware; at last, they can close the portal to the Web.

With everything in place, Megabyte declares "Now it's my turn!" - and attacks Dot, destroying her gun. Bob immediately issues a command to Glitch, only for Megabyte to stifle him mid-order, pluck the keytool from his arm and crush it in his free hand. With that done, Megabyte tosses Bob into a missile that appears from below the platform. Herr Doktor prepares to launch the missile, only for Mouse to toss him aside; in turn, however, Mouse is knocked away by Hexadecimal, allowing Megabyte himself to do the honors. Giving his nemesis a final sinister grin, Megabyte presses the button, launching the missile - and Bob - right into the Web portal. The Hardware is pointed at the portal and fires a blast, closing it in a brilliant flash of light.

Dot sadly picks up the crushed Glitch, as Hexadecimal advances on her menacingly. However, Mouse stuns the virus with her ring, and the sprites escape in Ship. Hexadecimal rages that their foes have escaped, but Megabyte is unconcerned, explaining that they will soon learn that there is nowhere left to hide. Contacting Lieutenant Chauncy, Megabyte orders his fleet to destroy the remaining Web Spores, and then blow the CPUs out of the sky. As the viral ships finish off the spores and turn their guns on the battered CPU fleet, Binky and Algernon realize the ABC's treachery and quickly contact the War Room. Meanwhile, Hexadecimal begins recharging the Hardware, turning it towards the Principal Office.

At the Principal Office, the celebration is cut short when Phong receives the alert from the CPUs. He tries to contact Bob, only for Dot and Mouse to arrive and report that Bob can't hear him. As Dot presses the crushed Glitch into Enzo's hand, the young sprite screams in horror and despair at the loss of Bob. To add insult to injury, Megabyte and Hexadecimal call the Principal Office at that moment, revealing their betrayal, demanding that Phong lower the defenses, and welcoming all present to "Megaframe".

Phong swears that Mainframe will fight to the very last, but Megabyte scoffs at the threat; their CPU forces are being shot out of the sky, their lone stronghold is in the Hardware's sights, and their Guardian is lost to the Web. In response, AndrAIa declares that Mainframe still has a Guardian, and reminds Enzo of Bob's words. Placing Glitch on his wrist, Enzo vows to protect Mainframe as Bob did, ending the episode with Bob's famous catch phrase: "I don't think so!" 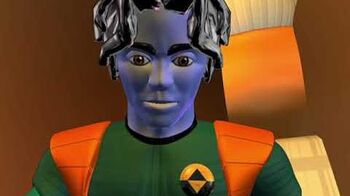