Web Riders on the Storm

The mysterious Web Riders that surrounded the Saucy Mare are nowhere to be seen. Ray Tracer, who is familiar with a lot of the Web, has never come across these people. AndrAIa is not doing any better. Watching over her are Frisket and Princess Bula. Her condition appears to have worsened. She's not going to make it unless they restore her energy and repair her code. Once again Matrix directs his frustrations at the surfer, but Princess Bula stops it. Ray goes outside to put a fix on the Web Creature that bit her.

Captain Capacitor ralleys his troop of scurvy "C drives" into battle readiness. Mr. Christopher, the accountant, worries that this trip is not garnishing any profit. The Captain's comment about there being other reasons to set sail beside profit and the rest of the crew is dumbfounded. "Doing the right thing, repaying a debt to a friend, is worth it."

Below deck, Bula connects a machine between Matrix and AndrAIa saying it is going to hurt. Without hesitation, Matrix activates the device and transfers some of his energy to AndrAIa.

The pirates are prepared to fight, yet are a bit surprised when Miss Sally reports that the surfer is already coming back, being pursued by Web Riders. He calls out to the ship to open the ruddy hatch. They do so, but it is only partly open. The surfer merges his body with the board and the riderless board heads to the airlock at full speed, deforming the inner door. The Captain orders the crew to open fire. Matrix is still hooked up to the machine, donating energy to AndrAIa, and is not in a condition to fight. Bula goes upstairs, but the Captain needs Mr. Christopher to "go down and extend an invitation to Mr. Matrix to join our little soiree."

Mr. Norton is successful at shooting down one of the enemies, but the jubilation is short lived. A second Web rider's sword bends the starboard gun barrels, rendering it useless. Meanwhile, the surfboard beeps twice, an indicator turns green, and Ray re-materializes. He's in better shape than Matrix, who is noticeably woozy. He climbs to an upper deck, then slides out on a spar to get to the ship's shield wall. Poking his Gun through the wall, he issues the command line for multiple target acquisition. The red target locks hit their targets, and Matrix opens fire, inflicting enough casualties to convince the Web riders to fall back.

The next thing, the Web Riders are driving the herd of Web Creatures toward the ship. The creatures ram the sides of the Saucy Mare, weakening the walls until it depressurizes. Enzo's Gun falls down the stairs and a One binome gets sucked out the hole. A large warrior attacks Matrix, and the Crimson Binome is very surprised to see that his file-lock sword is completely ineffective. Princess Bula is happy for a chance to crack some heads together. Ray holds his own, mowing down the enemy with his surfboard until one of them snags the device. Two of them, holding the surfboard and laughing in high-pitched modem sounds, demonstrate that they recognize his weakness by punching the board. Ray looks up at Matrix in the distance and gives a weak shrug that seems to say "sorry, lads, we're done for."

Matrix manages to knock the facemask of the big bully he had been fighting. "By Gaar! They be degraded sprites!", exclaims the Captain. The Web Riders response is translated as "Disrespect is unwelcome." It knocks out Matrix. The Web Riders have won.

Everything stops when a new player arrives on a zip-board. He's got a blue and green Web suit. The people with him close the hull rupture and have rescued the binome that got sucked out. The guy commands the others by saying, "Stand down, These are my friends." The guy walks up to Capacitor and Matrix, extends his hand, but before Matrix can return the handshake, Glitch jumps off of Matrix's arm and onto the new guy.

Mr. Christopher crawls up the stairs from below. Apparently, he had been giving energy to AndrAIa, and that's not enough. The guy goes below, where Frisket stands guard, growling. The newcomer says "Oh, hi Frisket". The dog sniffs and recognizes this person, then resumes growling. The guy hooks himself to the machine, and immediately AndrAIa becomes less transparent. He double clicks his own chest, and a yellow and black Guardian icon comes out. This is placed back to back with AndrAIa's icon, allowing the code to be mended.

AndrAIa awakes, looks at the stranger and says "Oh, Bob, we found you." Bob removes his helmet, and explains, "You just can't talk in these things." He has silver spots on the sides of his face, and his hair is much longer. Enzo cries out "Bob!" and runs to the Guardian. Bob holds him back with "Whoa! I think you're a little too big for that." 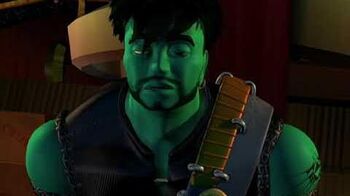