On Level 31 in the alley behind Al's Diner, Al's Waiter is taking out the trash. Something unseen is looking down at him. Before heading back inside Al's Waiter finds what he thinks is some of Al's nasty cooking. That something blinks, then slowly descends to where the waiter is. As he walks back into the diner, the creature watching him swoops down and grabs him. The waiter screams as the screen fades to black, and "Trust No One" appears on the screen in bright green letters. His limp body is dragged away.

In Baudway at Dot's Diner, Mouse is entering to have an Energy Shake with Bob. The CPU Senior Chief is sitting at the counter eating donuts when the CPU Chief rushes in and tells him that there has been another abduction, Al's Waiter. Bob asks what abductions they are talking about. They barely get started when Enzo slides into the Diner and informs Bob that Dot has gone missing. AndrAIa and Enzo's teacher, Miss Brodie is with them, saying she walked the two young sprites home when Miss Matrix failed to pic them up after school. Bob asks what abductions again, and the Chief explains that they have been getting reports of sprites disappearing on Level 31. Bob asks Mouse to take Enzo and AndrAIa to the Principal Office and heads off to Al's Diner on Level 31. Mouse asks Miss Brodie and the General and Chief to take the kids to the Principal Office and leaves as well, to attend to some unfinished business.

Bob enters Al's Diner and tries to get the attention of one of the waiters, who shrugs him off but not before telling Bob that Dot never showed up for her meeting with Al that afternoon. A couple close by hears Bob mention that Dot's gone missing and invite him to sit at their table. They are special CGI agents, Fax Modem, and Data Nully. They have their own theories about the creature who is abducting sprites: they think it is a Web Creature. Fax Modem blames Mouse. The pair was hired by Phong to investigate the disappearance of Al's Waiter.

Outside, Mike is trying to gather as much information as he can on the abductions. He brings his camera crew into the dark alleys of Level 31. Mouse peers onto the scene, and contacts someone called Turbo. As she's talking to him, Number Five walks by. Mouse stops chatting and says she has to go because she has found another victim.

Back in Al's Diner, Modem tells Bob more of his theories. He thinks Mouse is a web creature. He has had experience with web creatures in the past and knows what their screeches sound like. As they're talking Mike the TV comes on the vidwindow, to announce the abduction of Number Five, while holding up a milk carton with the missing numeral's picture on it. Mike makes his report, which ends up being pointless, and walks away. He then realizes his camera crew has gone missing. He, too, is attacked by the creature as he panics and tries to get away.

Inside the diner, we hear a very creepy howl. Modem is spooked and says that's exactly what a web creature sounds like. Bob and the agents rush outside.

At the site of the attack, it is evident that Mike was not taken with the others. Mouse is standing over his unconscious form. She gets held up by the two CGI officers but manages to trick them so she doesn't get caught. Bob comes on the scene and asks what she's doing. Mouse says it's not what Bob thinks but Bob refuses to let her go. He raises his Key Tool to capture her, but she kisses him to distract him, then runs off. Before she can get away, Bob has Glitch trace her so he can follow her, and zips off. The CGI agents are left with Mike, who regains consciousness. He says the creature bit him and gets hysterical. In his hysteria, he reveals that it was the light that saved him. Apparently, the web creature is sensitive to bright light.

Bob tracks Mouse to an old warehouse. He calls Phong and tells him that Mouse did not attack the victims: it was a web creature. He says he can prove it because the creature is shedding its skin. He thinks the creature is using the abducted sprites and binomes for food.

Mouse is walking through the warehouse and calls Turbo to tell him she's found the lair and is going to free the Mainframers. Turbo tells her it's too dangerous, but she goes ahead anyway. She goes forward through the warehouse and finds the room in which the victims are being kept. They are wrapped in cocoon-like pods hanging from the ceiling. Each victim is in his or her own cocoon. She walks among the cocoons until she finds Dot and cuts her free, then she frees the others. Dot tells them to run. Before she can escape the Web Creature returns and grabs her.

Bob arrives just in time and catches her as she falls. The CGI agents point their flashlights at the Web Creature. The animal screams in pain and goes into a catatonic state. Bob says there a security team on the way, but Mouse says he'll need more help than that. She contacts Turbo and tells him she has confirmation and to send help.

In the Super Computer, the Guardian Council listens to Mouse. A female Guardian tells Turbo they must act now, explaining the Web Creature is a Class-M and could invade the entire Net.

Mouse and Bob talk and Bob reveals that the person Mouse is working for is Prime Guardian Turbo. He says the Guardian protocol for finding a web creature in a system like Mainframe is total destruction.

The Guardian Council is in agreement and they all release their security codes. A large timer rises from the table and begins a countdown. Turbo asks to be alone for this, saying he and Bob go back a long way.

Bob looks at the communicator Turbo gave Mouse and finds out it is also a bomb. He grabs the communicator and zips off as fast as he can, getting the bomb as far away from the city as he can. Just before it explodes he launches it away from him. The explosion creates a large tear above the city, which attracts the Web Creature. The animal wakes up enough to break through the ceiling of the basement. The Creature flies to the tear and transforms it into a very large portal to the Web. As the Web Portal hovers over the city, Bob shouts "No!", Phong looks away in their failure, and Dot and Mouse stare at the portal in disbelief. Bob says, "This is it Phong, prepare for War". 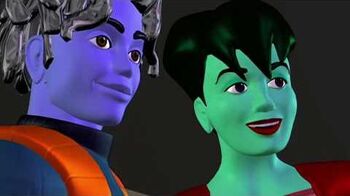