Dot sits in the Diner, hard at work, talking to her Secretary, who is telling her nothing but bad news. The Secretary informed Dot that the Mitchell Account was late as usual, a download from First National Data Bank was on hold awaiting her imprint, she was late for a board meeting at Fiche and Chips Industries, and that Dot had missed her flight to sector 1101. The call ends and Dot wonders, rather angrily, where Bob and Enzo are. As if on cue, they walk through the door, talking about a circuit race they had. Dot is angry with Bob because Enzo will be late for his Ancient Languages class. Bob, completely cool, says that Enzo can't be like Dot, he needs to learn to have a bit of fun. Dot gets completely put off and a heated argument begins, ending with Bob storming out of the Diner, resolving never to return.

Bob is at his apartment, working on his car. Enzo VidWindows him and asks him if he's ever coming back. Bob says he doesn't need Dot or the Diner and is so busy he'll never notice the loss. In reality, he's bored stiff without either of them. So much so, in fact, that he chucks Mike the TV down the garbage chute when he annoys him.

Back at the Diner, Dot and Enzo are sitting down, Enzo trying to convince Dot to apologize to Bob. A tear forms out of the central power unit and Dot, determined to take care of it without Bob's help, smacks the tear with one of the Diner stools, nearly making the Diner explode in the process. Enzo is appalled, and gathers a group of binomes to go to the Principal Office to ask Phong for his advise on how to get Bob and Dot to talk to each other. Phong says that "broken friendships are best mended by tragedy or apology." Enzo goes out to set up a tragedy.

At the Data Dump, Enzo has tied himself to the conveyor belt that deletes trash, and Bob and Dot run into each other and start insulting each other before they try to save Enzo. In the end, Frisket saves Enzo and all that happens is Dot smacks Bob with a mean right-hook. Enzo devises another plan.

Still fixing his car, Bob gets a house call. It turns out to be a delivery boy delivering a hologram. Bob opens it and Mike the TV appears, introducing the card as a hologram from Holomark, the hologram changes to Dot's form. She starts apologizing in rhyme and asks Bob to meet her at Floating Point Park. Dot gets the same message. However, when the two meet at the park, they quickly realize that neither sent the other a card in the first place. Before they can argue about it, a Game Cube lands.

The Game is Starship Alcatraz, and the User has just released all the prisoners. Bob and Dot reboot, but are so busy arguing that they lose the upper hand. They agree to cooperate to save their hides, but are still very tense toward each other. Their stubbornness gets them into a lot of trouble, but they gradually warm up to each other as the Game progresses and eventually manage to win the Game. By the time the Game is over, they are friends again and Bob says he'll come by the Diner again sometime soon. Enzo is confused about their sudden friendly talking. 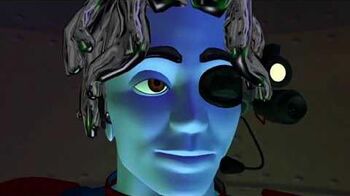