The Return of The Crimson Binome

A cruise ship comes through the Desert Port System tear and heads to the dock of the city. Captain Capacitor and his ships accountant, Mr. Christopher, are skulking about, hiding behind barrels and avoiding the CPUs. A floating "Wanted" VidWindow pops up, declaring 10,000 unit reward for the two, deleted or compiled. They figure they can blend in with the scurvy lot in the local cantina, but the only people it the demolished building are AndrAIa, Matrix, and Frisket. Enzo puts down his drink and stares in surprise at the new arrivals. "Capacitor?", he asks. But the Captain assumes that the declaration of his name is coming from a gleeful bounty hunter, and runs off. Matrix and AndrAIa burst through the cantina doors, and tell Frisket to find the pirate, and the chase is on.

In the fortified prison on the hill, a surfer and his surfboard are brought in front of an automated judge. He is found guilty of unauthorized travel between systems. The binome guards escort the Surfer to his cell. When he makes a wisecrack, they hit his surfboard, and that knocks him unconscious.

Frisket catches up to the running pirate but is frozen in mid-leap in a file lock. The Captain recognizes the dog from its ferocious teeth. Capacitor is taken aback when Matrix yells out, "Gavin, wait!" "How do you know me true name?" Matrix explains that he is Enzo and that he needs the Captain's ship to search for Bob in the Web. AndrAIa introduces her self to Capacitor who then comments that Matrix had such exquisite taste and kisses her left hand like a gentleman which makes her giggle and she tells him he's a charming rouge. A slow moving blimp blares out the reward message. The infected Guardians took exception to the pirates opening trade routes with other systems after Mainframe was disconnected from the Net. The pirate crew is being held in the prison. Capacitor and Mr. Andrews believes there is no way to get them out. AndrAIa informs the gallant Captain that he now has an unstoppable secret weapon, Matrix.

Inside the prison, the guards are monitoring the cells by VidWindow. AndrAIa plays the damsel in distress looking for her dog. The guards are severely distracted by her appearance. Frisket comes bounding in, knocking out some panels, then AndrAIa throws the starfish from her hair and it slices through the video consoles.

Outside the prison, Matrix and the two pirates take the alarm bell as their cue. There's no way over the wall, so Matrix just blasts a hole in it. AndrAIa and Frisket come barreling down the front sidewalk, only to be stopped by the automatic gates. The guards come out the prison's main entrance but AndrAIa is not worried. Frisket munches on the metal gate then throws it upon the pursuing guards. AndrAIa tells the dog to go ahead to the docks, she'll meet him there.

Captain Capacitor is frustrated by a combination lock saying, "Daaarrr! Blasted lock of codes!" Matrix blasts the lock then muscles his way in through the stuck doors.

Meanwhile, AndrAIa is playing hide-and-seek with the Central Police Units. "Hey, bits-for-brains! How many CPU's does it take to catch one sprite?" They fire and AndrAIa uses her trident as a pole vault to get away.

Matrix shoots the door off the cell holding the pirate crew. As they retrieve their weapons, the binomes jostle the locker with the surfboard, and that is enough to revive the surfer. He asks for help, and when Matrix refuses, the Crimson Binome scolds the young man for acting in such a churlish, vulgar manner. He blasts open the surfer's cell, then the surfer asks about the locker. Matrix shots the locker, almost destroying the guy each time. "Next time, it's your head." The surfers' parting advice is to head straight to the Edge of Beyond.

Outside, the surfer is noticed by three CPU cars, which demand that the felon surrender or be deleted. "Tough choice," is the reply. He leads them through the alley ways, where the cars keep knocking into walls.

The pirates are jubilant as they board their ship, the Saucy Mare, but Frisket is worried, AndrAIa is still in the city. Captain Capacitor surveys the harbor and spots two large naval destroyers approaching. The SS Cameron and the FFG-39 take aim.

The Game Sprite has gotten herself trapped in a dead-end alley. Faced with the same demand, surrender or be deleted, AndrAIa responds in a similar fashion, "Gee, tough choice. Bring it on!" About this time, the surfer notices the lovely damsel, outnumbered and definitely in distress. He nonchalantly steps off his surfboard, and it swoops down, slices of the car's machine guns. The board picks up the surfer before he touches the ground. The surfer uses the stereotypical pick-up line, "It looked to me like you could use a lift." At this point, he identifies himself as Ray Tracer. They are chased all the way to the cities port.

Back at Dock 66, the Captain has ordered the engines online and called for battle stations. Frisket gets excited when he spots AndrAIa and Ray, but Matrix is noticeably less enthused. Before the Ray and Enzo can makes something of it, the first volley arrives, knocking the Captain's hat off. "Fire at will!" commands Matrix. The pirate ship takes some hits, but is able to sink the SS Cameron. A flock of CPUs attack while the FFG-39 continues firing on the Mare. Matrix gets distracted by the sight of AndrAIa and Ray standing back to back firing. Finally the engines hit full power, eleven sails unfurl and the ship warps out of the dock, through the port exit, and out of the system.

In Cyber Space, the ship shows signs of damage. A hole in one sail, a breach on the port side spewing smoke, and various holes in the hull.

With the fight over, Matrix directs his jealous rage at the surfer. AndrAIa tries to get him to act polite, without much success. "Pleasant chap," states Ray, sarcastically. "Does he ever smile?" "If he does, run ... very fast," she replies.

Just then the engines give out. The ship quickly stops in mid-Net travel. Their portal generator was damaged by the warships, without it they're stuck. Ray offhandedly remarks that some of his best surfing has been done on the Web. He tells them he has the ability to open up a portal by himself. AndrAIa asks if he will help them get into the Web. He replies "For you, pretty lady, anything." As they walk away Matrix's targeting eye focuses in on Ray. 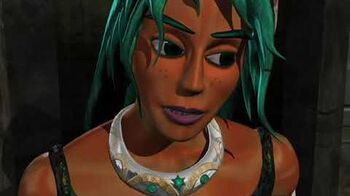