It's another sunny day in Mainframe and Dot is, as usual, working hard in the Diner. Apparently, she had promised Bob and Enzo that she was going to take a break for a picnic, but she is currently insisting on finishing up some last-minute tasks. Bob and Enzo go back into the Diner and find Dot talking to her Secretary about business. Not wanting to take "no" for an answer, Enzo and Bob pick Dot up and toss her into the back of Bob's Car. She protests, but it doesn't do any good.

Meanwhile, Megabyte's Limo sits near the bridge from Mainframe to Lost Angles, inspecting a device he has stolen from Hexadecimal called the Medusa. As he ponders what it could possibly do, Hex shows up and proceeds to rant and rage about how he's stolen her toy. Megabyte pays her no heed and returns to the Tor. Once back at the Tor, Megabyte activates the Medusa's power, and a yellowish glow starts creeping up his arm, leaving his arm stone behind it. Megabyte exclaims that its not a weapon, but a viral bug. As he starts to panic and query the computer about his predicament, Hexadecimal VidWindows him and taunts him about how she knew he would try to steal it. Megabyte and the Tor turn to stone as Hex wonders whether she's done the right thing.

Meanwhile, out in a green spot, Dot lies on a picnic blanket relaxing, while Bob tinkers with his car. Enzo hears Frisket bark, then sees the dog running from the same yellowish glow that infected Megabyte. Enzo warns Bob and Dot, and they all hop in the car and drive away as Frisket gets turned to stone. They go to the Principal Office, where they meet Phong.

Phong and the trio deduce that the culprit is Hexadecimal, and they start thinking of a way to stop the Medusa Bug. Each decides to do their own part to help out, and Phong takes Bob to the Mainframe Armory and gives him an antique Viral Erase Command on a hope that it will work with a power add-on. Bob is skeptical, but takes it out into the system anyway, passing Dot, who is helping to evacuate the city, on the way. Bob throws down the Viral Erase Command into the infected part of the city, and it has a small effect, but the Medusa quickly over comes it.

Bob returns to the Principal Office, where the infection is headed. All citizens that haven't been infected are gathered in the main hall of the Principal Office. Several gather in cafeteria lines, some start camp fires, the Baby Binome and his parents are there.

Bob slides down the slide in Hex's lair for a heart-to-heart talk. He finds the Hexadecimal has decorated her Lair with infected Mainframers. Even Scuzzy has been infected. They spar verbally for a time, but Bob wins by stating that Mainframe is so peaceful and predictable now that it's all turned to stone. Hex freaks out and turns everything back to normal.

At Floating Point Park, Bob exclaims that out of all the miracles he's pulled off that day, the biggest was that he and Enzo finally got Dot to relax. Dot tells them they both should get a medal. Then suddenly, an incoming Game drops on Mainframe as they turn to the screen in disbelief.

During the end of the first airing of The Medusa Bug, it wasn't a Game that interrupted Bob, but another Medusa Bug. The trees around them turn to stone, a "here we go again" scenario ensues, and the episode ends saying To Be Continued. This leads into the Promo Spots.

Due to production delays the fifth episode of ReBoot, (The TIFF), was not ready to air after the Medusa Bug was aired. For the next several weeks ReBoot appeared as short Promo Spots, each only a couple of minutes long. The five short clips told a story of Megabyte creating his own version of the Medusa Bug and unleashing it on Mainframe. See: Promo Spots 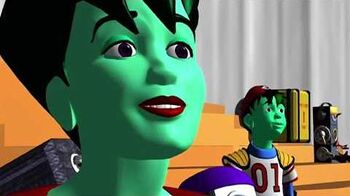