Megabyte has hired a mercenary/hacker named Mouse to help him in his continuing efforts to get to the Super Computer. Megabyte uses a Data Compression Command to shrink an ABC so that it can get into a sprite's body. He tells Mouse, Hack and Slash to shrink down and get into Bob's brain so as to obtain the access codes to the Super Computer using a Neural Matrix Scrambler. Mouse, Hack and Slash get into a modified ABC, are shrunk, and are sent off to Sergeant Smiley, who is waiting at a checkpoint. Agent Six and Agent Twelve alert Megabyte when Bob leaves the Game and where he's going.

Meanwhile, Bob, Dot, and Enzo are in Al's Diner where they order drinks. Unknown to them, Megabyte's viral spies have subdued Al and have taken over the production of food. They slip the shrunken ABC containing Mouse, Hack, and Slash into Bob's drink. Before Bob can drink his shake, Enzo has a sip, and the vessel enters the wrong body.

Mouse, Hack and Slash head for the central nervous system, believing they are in the right body. When they get there, Hack and Slash start goofing off in the workings of the brain, causing Enzo to dance uncontrollably. Worried, Bob and Dot take Enzo to see Phong.

Phong is intrigued by Enzo's behaviour and peers into Enzo's ear. He manages to see Hack and Slash inside Enzo's head. He relays the news to Dot and Bob, and Bob decides to go after them. He asks if Phong has a Data Compression Command, but Phong tells him that has is an old Bpeg. Bob is shrunk down and inserted into Enzo's ear.

Meanwhile, Megabyte is trying to get control of the body. He gets Mouse to access "Bob's" memory. When he asks for the Super Computer access code, he is given the reply in a child's voice: "Alright, guys. Remember: the password is 'bellybutton'. And no girls allowed." This makes him very suspicious and he gets Mouse to get manual control of the body. Finding a reflective surface, he discovers that "Bob" is really Enzo. Angry that his henchmen could have gotten into the wrong body, he begins to despair. He gets Enzo to move, and sees Phong and Dot. Realizing he is in the Principal Office, past all the security, he decides to change his goal. Megabyte now wishes to get into Mainframe's Operating Core.

By controlling Enzo's motor functions, Megabyte gets him to the Core. The System Voice says, "Warning, Mainframe Core, Do Not Enter." Megabyte forces the little sprite to over-ride the security locks and enter the Core.

Meanwhile, in Enzo's brain, Bob gets around Hack and Slash and into the ABC controlling Enzo's brain. He is captured by Mouse and Liner Stasis Field. She removes the lock out of curiosity, and recognizes him. Bob had arrested Mouse a while back and they had become friends because of it. Bob explains the current problem to Mouse, telling her Megabyte is putting Enzo, and by definition, them into direct danger by sending the boy into the Core. Mouse, who has been double-crossed by viruses too many times already, pulls the plug.

Enzo regains control of his body and gets out of the Core as quickly as possible, saying it's way to hot in there.

Megabyte, angry at Mouse's betrayal disengages the compression field. Mouse and Bob, with Hack and Slash in tow, get out of Enzo's body through his nose; he sneezes them out just before they can regain their normal size.

Dot and Phong greet Bob and Mouse. Dot questions Bob about Mouse, but as Bob turns to introduce her, Mouse has disappeared. All that is left is her insignia on the wall.

They send Hack and Slash back to Megabyte, shrunk. 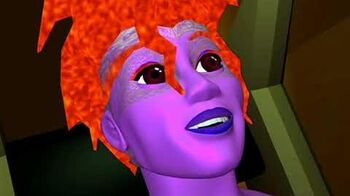