The Episode With No Name

In the Desert Port System the city is surrounding the sea, instead of the other way around. A large tear sends energy down to a ring in the sea. An unfamiliar system voice announces "Game Over" and a Game Cube rises from the city. The city is surrounded by a large desert. There is a fortress high above the city and a large port servicing the ships. The stone cobble streets of the city are deserted. There is a fountain with a statue of a one binome with a spear, some brightly colored awnings, but no vendors. Nothing but the sound of the fountain gurgling.

As AndrAIa, Matrix, and Frisket wonder where the people are the square comes alive with the sound of a Bantha. An incredible menagerie of people and critters. Matrix has Glitch scan the place, and is overjoyed that this system has ports to the Net. They're going home!

His kiss with AndrAIa is interrupted by a pickpocket, Slimey Goober, who takes the Guardian's Key Tool. Matrix tears out after the guy, and AndrAIa calls out, "stay frosty, Sparky!" She decides to do some shopping while Matrix is occupied. Frisket is unexcited at the idea of shopping.

Matrix takes the high road, jumping from one roof to another while chasing the pickpocket, and uses an awning to backflip onto another building. He flips up onto a horizontal rope, but it sags beneath his weight.

Meanwhile, AndrAIa is besieged by vendors selling "files and data", red apples, and such. Even an upgrade with a middle east design.

The city's sun flares and rings of light pile up. A Zoom Room shots into the system and releases a group of two blue men, a yellow woman, and four spider-like drones. The populace hides yelling "the Guardings are coming, the Guardians are coming!" The woman is the leader of the Guardian team. They are darkly dressed and do not look friendly. They terrorize the populace, holding a One binome upside down for the fun of it.

AndrAIa and Frisket missed out on the excitement. They were at the dingy end of the marina, looking for transport. They come across a chrome plated woman named Maxine cleaning up her boat. When asked if she could transport them to Mainframe she asks for authorization codes. Internet travel is restricted. And when AndrAIa is confused, the woman asks, "where you been, playing games?" AndrAIa asks who restricted travel, and Maxine informs her that the Guardians did.

Matrix has followed the thief to a building marked SIBEDAR, a small dingy bar. Matrix bursts through the saloon doors, and the bar goes silent. He orders an I/O Shot, and the only sound is from the pickpocket quaking in fear. The thief denies he has Matrix's property, until the Mainframer has Glitch activate its homing signal. But the little guy has some big menacing friends on his side.

Matrix keeps his hands up, but that doesn't stop him from controlling his Gun. The voice activated weapon sends out targeting spots to everyone in the room. "Gun, Death Blossom mode." It rotates rapidly, ready to spew death and destruction in all directions. Glitch is returned, and everybody leaves.

Just before Matrix can take a sip, he notices someone it the shadows. A familiar voice states that he is looking for Guardian 452. He wants to know what happened to Bob. It's Turbo, the Prime Guardian.

It's the man who ordered the destruction of Mainframe. Matrix goes for his gun, but Turbo's keytool, Copland, is faster, activating a ringed containment field around Matrix. Turbo releases the field when he hears that this big guy is Enzo Matrix. By his reconning, Turbo says, Enzo is 1.1. Game time is accelerated, Game Hopping has cause Matrix and AndrAIa to age faster. Copland and Glitch talk to each other, Turbo says its a great honor to be selected by Glitch. The keytools are sentient. Copland will leave Turbo if and when the Prime Guardian succumbs to the infection. But the reason Turbo came to the cantina was to warn what he thought was Bob. At that point, bullets hail in from the outside, breaking every bottle in the bar.

Back at the docks, Maxine tells AndrAIa that the "mend and defend" Guardians are operating in "divide and render" mode. The only people who could help are locked up in the prison above the city. Her format is Search Engine. But before she can explain this term to AndrAIa, they hear the battle. AndrAIa dashes off.

The yellow woman and bad Guardians outside, demanding the surrender of "the rogue Guardian, Bob". The good Guardians refuse to throw down their weapons. Instead Matrix asks if the drones have personality chips. The yellow woman says no, which allows Turbo and Matrix to obliterate the spider 'bots without feeling guilty.

The warning Turbo was delivering was of the infection. Glowing green lines around his temples and his icon. Turbo claims he is strong enough to fight it, but the super virus, Daemon, has infected the entire Guardian Collective. Only two Guardians are uninfected, Bob and Enzo. Daemon arranged the Web Creature that caused the near destruction of Mainframe. The bad Guardians have a lock on Matrix's icon. They can follow him where ever he goes. "Not if I do this."

The yellow woman loses the signal when his icon turns into Game Sprite mode, so she assumes that Matrix has created a portal and left. Just then she notices the pickpocket, who tells her about Matrix's companions. Her henchmen head back to the square, where they find AndrAIa and Frisket surveying the damage. AndrAIa winks at Frisket, and wait for the appropriate time.

A large blimp casts a shadow over the SIBEDAR and a screen on it announces "Guardian 452, we have your female and the dog. Surrender or they will be deleted." Matrix is not worried. Sure enough, Frisket jumps up and eats the cameraman.

The yellow woman is waiting for her men to return. She hears a noise, but instead of her men with the prisoners, Frisket and AndrAIa stare at the yellow woman and her one remaining spider drone. "And my men?" "Don't ask." Frisket growls, AndrAIa translates. "He was wondering if your drone has a personality chip." The drone realizes the implications, and runs off, screaming like a kicked dog. Frisket lays down disappointed.

No one moves. The woman fires her blaster, AndrAIa deflects it with her wrist spikes, then unleashes four of her long fingernails. The woman goes down with poison darts in her throat.

Turbo and Matrix part ways after the cadet creates a tear out of the coffee maker. Turbo turns it into a portal to the Super Computer. Matrix tells Turbo he now has an ally on the outside. They part as friends.

AndrAIa saunters in, and Matrix explains that Turbo is a good guy. But they still don't have a ship. Just as Matrix finally gets around to his untouched drink, Glitch locates a possible transport. Its captain walks through the door. Matrix is amazed to see Captain Capacitor, the Crimson Binome. 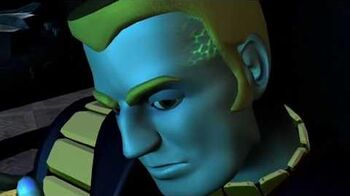