The Edge of Beyond

The engines are back online and Ray Tracer is on his surf-baud out in front of the Saucy Mare, leading the pirate ship to the Edge of Beyond. When he comes back on board and makes small talk, AndrAIa considers the surfer's friendly banter to be harmless, but Matrix does not.

The ship finally reaches the Edge of Beyond. It is a giant tear the size of a system, surrounded by a galaxy of floating debris. Ray explains that they are going to need protection, specifically Web shields, formed from the scales of the dead Web Creatures in the vicinity. Captain Capacitor remarks "I get you, lad! Clad the ship in the 'scales of the dragon'."

The upper deck of the ship starts to look like a whale's ribcage as the creature's bones are lashed together. Matrix uses the ship's anchor as a grappling hook and hauls up a creature using the heavy chain. Ray offers to help AndrAIa, causing Matrix to stomp off in a huff. Disgusted, AndrAIa heads off on a pirate Zip Board, grumbling about the "darn, obstinate hard-headed sprite".

She comes across an organic blue and purple tower of spheres amongst the skeletons. It appears to be alive since it is moving and bending. Ray recognizes it and tries to warn AndrAIa of how dangerous it is, but before he and Matrix can get there, a baby Web creature hatches from the sphere and bites AndrAIa's arm, stealing her energy and part of her code. Ray refuses to let Matrix delete it with Gun, explaining that killing the Web creature would also destroy AndrAIa's only chance at recovery. It's a Class M creature, able to stabilize the tear into a Portal, but before it gets away completely, Matrix has his Gun target it.

The crew continues working on the ship, preparing it for the Web. When they finish, the ship looks like a giant Web Creature. They have fashioned a hatch on the port side where they can enter and exit the ship.

Captain Capacitor asks Ray if it really is possible to save AndrAIa. Ray replies that he will face any danger to save her. The Captain's request to go below and fetch Matrix puts that resolve to the test. Down below, Princess Bula, Frisket and Matrix are watching over AndrAIa, who is fading in and out, slowly becoming transparent.

Ray goes through the airlock on his surf-baud. When he double-clicks on his icon his entire body becomes covered with dark gray scales similar to the Web creatures. His hands glow with yellow energy and he touches the surface of the tear and transforms it into a portal to the Web. Ray enters the portal and the ship follows.

Once inside the Web, the portal forms and The Saucy Mare exits, slowly making its way among clinging red and blue clouds. Mr. Andrew, the helmsman, reports that "It's like navigating an invisible lead soup". Matrix's Gun picks up the tracking signal again. He takes over the steering wheel and goes after the Web Creature. This distresses Ray Tracer since the chase takes the ship right through the middle of a data storm. The storm causes the ship to buckle and shake, and the intense pressure causes the bolts to burst from the bulkheads.

After helping to keep the ship safe through its rough passage, Ray comes on board asking what happened. He and Matrix come to blows, then Ray declares "this is my digital domain, if you want to survive the Web, you better do as I say." Matrix goes into a rage, hits Ray, and nearly shoots him, only to be stopped by Captain Capacitor, reminding them both that he's in charge of the ship.

Time passes as Matrix paces impatiently while the surfer continues looking for the Web Creature. Finally, Capacitor announces "Thar they flow!". It's a group of the creatures, making noises like a pod of whales. Matrix borrows AndrAIa's trident and lets the surfer use it as a harpoon. Ray is too busy sneaking up on their quarry to notice that the creatures are being herded by another beast with a rider. Just before the harpoon is stuck, the rider sends his toothsome beast straight at Ray.

There is no sign of Ray. Only his surf-baud, which has a large bite taken out of it. Matrix has to finish the job. Luckily, the crew has been busy in creating a protective suit for him to wear. Matrix leaves his Gun behind with Gavin because it would degrade out in the Web. He boards a small lifeboat covered in Web Shields and heads for the pod of web creatures. During his departure, no one notices the surf-baud regenerating itself.

Two Web Riders watch Matrix approach the pod. Speaking in high-pitched tones they send their trained Web creatures against him. As the subject of the great hunt sails over him, the Gun's target gets knocked off. Matrix is knocked off of the small boat and falls towards a swirling Maelstrom. Ray appears and grabs Enzo before he falls into the storm. They make their way back to the Saucy Mare.

Back at the ship, Ray implies that Matrix did not need to go outside.
Ray: "I told you I had it covered."
Matrix: "Covered my ASCII! What are you?"
Ray: "A Search Engine, next generation."
Matrix (in awe): "You ARE the Surf-Baud."
Ray: "Heh! You're smarter than you look."
Gavin: "What happened, lad? The pod's moved off! There's nothing out there!"
Matrix: "You're wrong, Captain. There is somethin' out there. I suggest you order battle stations."

A fleet of Web Riders slowly moves toward the Saucy Mare. 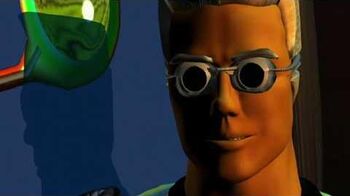