In Kits Sector its peaceful day for everybody, including Bob. The peaceful scene is disrupted as a portal opens out in the Energy Sea, and a pirate ship docks in the port. Binome pirates swarm off the barge, file-locking everyone in sight.

Bob is in his apartment's garage, tinkering with his car. He listens to heavy metal on headphones, and as he is getting some tools from his workstation, sings (very badly) into a wrench. Unbeknownst to the guardian, his car is being stolen behind his back, along with Glitch.

The pirate Miss Sally brings Bob's Key Tool to Captain Gavin Capacitor "The Crimson Binome". The good captain seems very interested that his crew found a guardian Keytool in a system as small as Mainframe. Where there's a Keytool, there's bound to be a Guardian. With this reasoning in mind, there is a good chance to make some big profit, so when Bob comes looking for his keytool, the pirates grab him and quite literally dump him in the brig. The pirate ship jumps out to sea, leaving one guardian-less system behind.

Luckily, Phong hears of the news and catches Dot on her organizer. Dot and Enzo make it their mission to get Bob back. They go to Beverly Hills where Phong authorizes Dot to commandeer Mr. Mitchell's sailing yacht, the fastest ship in Mainframe. With Dot in command, the ship catches up to The Saucy Mare. Bob has had time to escape from the brig and is wreaking havoc on the ship's guns, navigation, and rudder. Dot has an easy time of pulling up beside the Mare and boarding her.

A battle ensues, in which Frisket and Bob both get file-locked. Dot enters into a financing debate with Mr. Christopher, the Mare's accountant. The pirates are stunned by Dot's efficiency and before you know it, Dot and Gavin Capacitor have become business partners.

The Saucy Mare returns to Mainframe, escorted by the sailing yacht, to return the stolen goods. 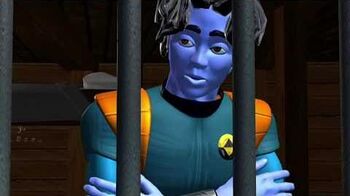