Bob and Enzo are playing Circuit Racing with some binomes. Bob calls Dot, who tells him to keep Enzo busy all day. It is Enzo's birthday and she is preparing a surprise talent show for him. Bob agrees to keep Enzo away from Baudway for the remainder of the day.

Dot is sitting beside a female binome, Emma See the program censor, in the Diner parking lot, where a stage has been set up. They are evaluating auditions for the night's show. Mike the TV is announcing all the acts. The only problem is the acts are terrible. There are a few acts that Dot likes, but Emma rejects them for varying reasons.

Megabyte is in his throne room, watching the activity at the Diner. Curious, he contacts Lieutenant Chauncy and tells him to send some spies to scout the activity on Level 1. He also VidWindows Bob, who is playing Jet Ball with Enzo, and nearly blows the cover-up.

Some people that audition but Emma said no to were the fabulous acrobat guys, A Zero that bugs its eyes and falls to pieces, The Dires, Sal and Harv, Johnny O'Binome, Live Null Juggling, and Captain Quirk.

Everyone is excited when Phong comes to audition, he sings "Unforgettable" and unfortunately forgets the unforgettable words.

Some that Emma approved were the Small Town Binomes singing "B.S.'n'P.", and the Primitives.

While people audition for the talent show, Megabyte's spies sneak around backstage, trying to gather information. They are lead by Agent Six and Agent Twelve. The viral spies are so absorbed in their snooping that they do not realize it when the "irritable backdrop" curtain rises and they are in the middle of the stage. Startled to be front and centre, most of them sheepishly try to exit the stage but one of them improvises a break dancing act, which Emma liked but Dot hated. After Mike kicks them out Agent Six reports to Megabyte that there is to be a "celebratory event" that evening. Megabyte reveals that he is going to carry out a plan.

Bob is still entertaining Enzo, their at the Energy Park in Beverly Hills. Enzo is getting very tired and wants to go to the diner. Bob pushes Enzo down the energy slide and calls Dot. She tells him that they are not ready, but Bob tells her he can't delay Enzo much longer. Suddenly he sees Enzo fly off on a Zip Board toward Baudway Sector.

Enzo arrives in Baudway at Level 1 and is surprised by the number of cars parked in the parking lot. He is so absorbed in his thoughts he does not clue in to what is going on around him. He walks onto the stage and is cheered by all who are gathered. Some yellow energy sparkles around Enzo and he upgrades to 10, and the talent show begins. Dot sings a song called 'You're Alphanumeric', dressed in a very fetching and beautiful short-sleeved red dress. Bob and Enzo watch with their jaws dropped. Dot causes Bob to fall over and wins the heart of everyone in the audience. When she's finished, an Elvis binome comes out on stage. Before he can sing, the set comes down on top of him.

The drum set sets itself up, with a Tor-shaped upright coffin at the center of everything. The coffin opens, revealing Megabyte within. He jumps down from the coffin, holding a lime green electric guitar.

Bob confronts him, and gets Glitch to turn into an electric guitar. Bob and Megabyte then have a big guitar duel. The entire crowd cheers wildly for them. At the end, Megabyte gives Enzo his guitar saying: "I always wanted to do that." and leaves the building. Baffled, Dot wishes Enzo a happy birthday. 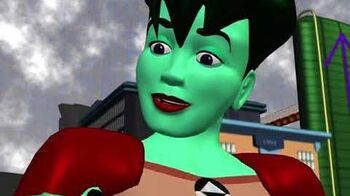