Down by the docks, some hillbilly binomes are playing, dancing to dueling banjos, when the pier starts to disintegrate. The null-Juggling Clown is one of the victims. Then the building with four rock stars collapses. Panic in the streets! A waiter on roller skates glides past Data Nully and Fax Modem. Fax is trying to make up his mind between flier for B.C. and one for L.A.. Elvis Binome is squashed. The tower of Eight-Ball Apartments falls down. Its 8-ball goes rolling after Indiana Jones Binome. A family of three watches this and tries to outrun the destruction. The young boy watches helplessly as his parents get swallowed up. Although portions of the damaged Principal Office are falling apart, most of the central area is in relatively good shape. Dot has a plan. She has all the inhabitants of Mainframe evacuate to the Principal Office. Mouse and Ray Tracer spread the word. As the two visitors to Mainframe are flying around, it is clear that Mouse is flirting with the Surfer. He usually travels alone since he hasn't found anyone willing to take the risks that he does and this amuses her. They pick up two very polite punkers and drop them. Al's Waiter is going inside the Principal Office and calls for Al, getting the usual response, "What?!".

Back in the War Room, Phong is still in the bell jar and is very glad to hear that Hack and Slash have found the rest of his body. He tells the others to shutdown power to the other sectors, so that they will go off-line quietly, instead of being torn apart. The Core Control Chamber was almost completely destroyed in the war. Someone is going to have to go into the Core itself and perform the shutdown manually.

Herr Doktor and the Bunnyfoot are trying to remain unobserved, but Hexadecimal finds them. They were the ones that put the nasty pain collar around her neck. It's not clear what she's planning to do to them, but she's holding a rolling pin and laughing cruelly.

Almost everyone has made it to the Principal Office. Even the Baby Binome and his parents are there. One last binome is holding out, Old Man Pearson down at the Data Dump. When Matrix tries to argue with him, the big guy has to explain that he really is Enzo and switches his icon to Game Sprite mode as he is explaining. This conversation via VidWindow is really a diversion so that AndrAIa can get close to use her poisoned fingernails to put Mr. Pearson unconscious.

Everything seems to be under control when all hell breaks loose. Three tears open up near Matrix, Mouse, and Ray. Out comes Zaytan, the form of the User that defeated Enzo when he was forced to leave Mainframe.

Bob enters the Core as Hack, Specky and Slash notice a bunch of tears opening up. Dot convinces him to continue the task, stating that she has things covered. But the instabilities in the system have released all the User's old forms from undeleted RAM.

The User form Zaytan attacks Matrix, who finally gets his revenge on the User that took his family from him. Santa Claus goes after Ray Tracer. Silver Knight User carrying a mace and Killer Clown double-team Mouse. The Malicious Corpses User strangles Dot. Red Spacecraft User attacks AndrAIa's flying motorcycle. A Pterodactyl + fighter/bomber is taken out by pirates. Prisoner User knocks out Specky. Blonde Flier User gets Mouse in a headlock. Ray stomps on Little Greek warriors and Wooden T-Rex. Warrior carrots get their heads knocked together by Matrix. A Shark out of water flops around at Enzo's feet. Robot T-Rex with a Super Scope is tackled by Matrix.

Bob elevates to the center of the Core. With communications down, he's on his own. That is, until a familiar apparition shows up, Megabyte! Actually, it's a simulation. One designed to be able to mock Bob one last time. The hologram does not prevent Bob from turning off the subsectors. He taps hexagons with red lights, the extent to where he can turn the handle, then push them back in, turning them blue. Each sector is not safe until all of its subsectors are done.

Dot is doing her darnedest to fight off a User from the Malicious Corpses Game. It defeats Hack and Slash, but not Frisket, he gets his revenge for that User shotting him. On the other side of the room, the Prisoner User has the best of Specky, despite Phong's efforts. Then Princess Bula steps in and gets rid of the User with one hand.

Mike the TV bursts in, asking if there is room in this crowded show for a cameo appearance by the everyone's favorite television, and the answer is a resounding "No!"

In the Core, the simulation has created multiple images of Megabyte, all telling Bob that the situation is hopeless. The Guardian does not believe in the "no-win scenario". One particular subsector is very difficult. Its completion causes Megabyte's dissolve. But still the edge of destruction approaches. Bob is able to do the last one just before passing out.

Status lights turn green, the central parts of Mainframe have been spared. Matrix and AndrAIa retrieve the weakened Guardian. "System, out of danger?", he asks. Dot goes to kiss him, but the osculation is intercepted by Rocky The Rabid Raccoon User, who kisses Dot.

Phong has bad news. They have survived Megabyte's bane, but Mainframe is still doomed. 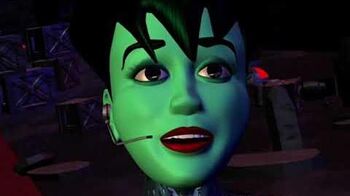