The city of Mainframe is nothing but a burned-out shell now called Megaframe. The fighting between Megabyte's forces and the Mainframe Rebellion has left many binomes homeless. They live in burned-out cars and rooms open to the sky. A shell-shocked One in a rocking chair stares at a wall that says 11010011 / 01101011 / 10111010 / 1101. The quiet despair is shattered by an explosion, the Sub-Sphere above the Principal Office goes up in flames and releases a tear. Twenty-four ABCs converge on the tear, securing it for Megabyte. The first eight characters of the command code taken from Phong allowed Megabyte to release the tear, and as soon as he gets the other eight from Phong he will be able to create a portal and leave Megaframe.

The Saucy Mare rises over the remains of Silicon Tor and heads for the tear. The viral binomes are surprised to see the pirate ship bearing down on them. They all line up and release a barrage of missiles. Most miss, but some break through the hull, revealing an interior packed with sticks of dynamite. A huge explosion in the bow sets the ship a flame. The Mare remains intact long enough to carry flames to the fleet, destroying them. The ship continues on, leaving a trail of fire as it crashes into the Energy Sea. An emotional Captain Capacitor and AndrAIa watch the scene. The Captain vows the Mare will not go down in vain.

Outside the Principal Office, Matrix and Mouse signal their troop of bazooka binomes to attack. They damage the outer defenses allowing their troops to run across the bridge toward the building. Once they reach the outer doors, Matrix and Mouse are pinned down by a viral gunner. Frisket has his mouth full and cannot help. AndrAIa shows up and hits the gunner with a starfish. Mouse goes off to help their other troops. Dot is in the rebel headquarters commanding the entire attack.

At Hexadecimal's Lair, Bob is being held prisoner on a comfy chair. Hexadecimal is bored and is treating Bob as a play toy. She dances with the Guardian, coyly complementing him, then menacingly offers him a biscuit. She is unsure if she should talk to Bob, or kill him?

Phong is still holding out on Megabyte, refusing to give up the codes. Megabyte gets impatient and authorizes Herr Doktor and Bunnyfoot to use torture. Matrix batters his way through the doors, scatters the binomes, and finds Phong. Enzo quietly comes up to Phong and tells him who he is. Phong slowly raises his head and weakly greats him. Enzo asks where Megabyte is and Phong yells that the virus is behind him just as Megabyte slashes his claws at Matrix.

Megabyte has no difficulty figuring out who Matrix is, the boy Enzo. Matrix responds by drawing his Gun, but the cunning virus convinces him to "fight like a real sprite", without toys. The hot-headed sprite obliges by tossing his Gun aside, and surprises Megabyte with a punch that leaves a noticeable dent in his chest. The next blow knocks Megabyte through the wall into the next room. Megabyte fights dirty, extending his retractable claws. Matrix asks what about "no toys" and Megabyte tells him he's a pretender. The virus mocks him, asking where his sister is to protect him, or better yet his firewall. But before Megabyte can deliver the final blow, there is a commotion outside. AndrAIa tosses her trident to Matrix, who quickly uses it to block Megabyte's claws.

Bob is still an unwilling partner in a tea party. Hexadecimal does not want him to leave, she says they "have so much catching up to do." Bob finally notices that her mask is damaged. He wants to touch it, but she hides the blemish from him. "I don't know if I can let you do that, Bob" she tells him. Bob lifts his hand and releases an energy beam. The touch is painful at first but heals her face. Now she can move her lips instead of changing masks. Hexadecial says that for the first time she feels whole. Bob asks if he can go and she replies that for him, anything, teleporting him away.

Megabyte's goal is now to reach the top of the spiral staircase where the tear is floating, but his progress is hindered by Matrix. They battle it out, slowly going up the stairs. Megabyte knocks Matrix down with an iron pipe, but the brawny guy recovers his balance and uses the trident to give Megabyte a gaping wound in the abdomen.

Enraged, Megabyte knocks down a slab of concrete that takes Matrix riding down the staircase. This allows the virus time to get up to the tear. On the top of the Principal Office, Matrix shows up and they resume fighting, punching holes in the wall with each other's heads. Megabyte's last punch sends Matrix skittering down the roof of the spherical Principal Office. Matrix can barely stand, Megabyte kicks him further down the building. Matrix stops just shy of the broken edge of the building, and as he catches his breath, Megabyte prepares to stab him. Matrix moves just in time. Megabyte swings his claws and Matrix swings the trident, shattering the virus' claws. Matrix decides he won't stoop to Megabyte's level and spares the virus' life. Megabyte jumps off the roof, landing on an I-beam below. Although one of his legs is useless, he has the ability to control the tear. Megabyte brings it down, stabilizes it into a portal, but just before he can enter it, Mouse hacks into the portal changing its destination from the Net to the Web. Web Creatures drag Megabyte in, then disappear, but not before Ray Tracer comes out of the portal.

Bob materializes on the roof in a burst of yellow energy. Suddenly the whole city shakes. What few buildings are still upright start falling over. The entire system starts to shutdown. "This is bad, very bad." 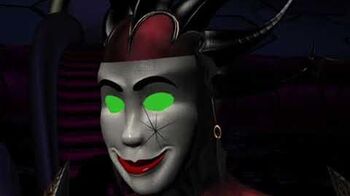