Daemon is heading for Mainframe with an infected Mouse by her side. Dot and the Principal Office staff cannot reprogram the Firewall. When Mouse arrives, they're defenseless. Dot has a secondary Firewall created to give them an edge.

Meanwhile, Welman Matrix is playing baseball with Little Enzo. Phong checks to see how things are going between them. Little Enzo has adjusted well to his father's transformation, thinking its cool that his Dad's a null monster now. Bob is left despondent by the fact that, due to ill-health, he's unable to contribute to the defense of Mainframe. Hexadecimal attempts to both cheer him up and heavily flirt with him, eventually forcing a kiss on him and telling him that Dot said she just wants to be friends with him. Before this can develop further, the first Firewall is destroyed.

Bob and Hexadecimal arrive at the Principal Office where Welman and Phong are working on the Gateway Command. Dot, running operations, gets into a brief spat with Hex. When the System Voice announces an incoming Game Cube, Dot asks Enzo to go into the Game with Frisket and Hack and Slash. She tells him to change his icon to Game Sprite mode and stay there until he's as old and big as Matrix. This way, he can come back and save them if all goes wrong. Bob can't believe what he's hearing. Enzo, at first eager, seems slightly shaken when he actually enters the Game.

Dot explains to a horrified Bob that she's covering her options. She also wants him to use a portal to get to an offline system so Daemon can't capture him. Refusing to leave, he realizes her strategy is to use the Gateway to kill Daemon. By using the Gateway to connect with every address on the Net they can activate it when Daemon arrives, and she will be completely fragmented. Without Daemon's control the Net may recover. It's a thin plan, but it's all they've got. Suddenly the Firewall collapses and Daemon enters the System, the CPU fleet preparing to shoot if the Guardians invade. Daemon enters the system alone and greets the Mainframers with warmth and friendliness, except for Hexadecimal who she views as an abomination for changing her format.

She prepares to walk through the Gateway, but the instant she touches the ground, her infection sweeps Mainframe, brainwashing everyone to her will and making Welman collapse into a scattering of nulls. She brings the other infected Mainframers back home using a Zoom Room and prepares to use Bob to reach all the remaining Systems. Hexadecimal asks Daemon's forgiveness. Daemon cruelly says no and throws Hex into a wall, knocking her unconscious and cracking her face.

During all this, Enzo has won the Game. He can't bear to leave his family. He, Frisket, Hack and Slash emerge to find Mainframe infected and Daemon using Bob to create portals, with Bob getting weaker with each one. With the robots looking to him for guidance, he realizes he's not Matrix. Little Enzo taps his icon and changes his clothes to the Guardian's, declaring his function is to mend and defend. Hack and Slash are tasked to help him, though Slash is unable to stop Daemon.

Finding the infected Matrix and AndrAIa, he tries to get them to help, but Matrix is too much at peace to fight. While Hack restrains AndrAIa, Enzo has Frisket bite his older version and try and use the pain to get through the infection. When declaring he'll hurt Frisket, Enzo challenges him on this: "We love that dog, and you'll hurt him? Would you hurt Dot too? Would you hurt Bob? Phong?!" Getting Matrix to declare "No!", he urges him to focus on his hate for viruses to get past the infection, which lasts long enough for Matrix to switch his icon to Guardian mode, causing him to be hit with uninfected Guardian code. Matrix uses his clean code to disinfect AndrAIa.

Enzo, AndrAIa, Hack and Matrix go to the Principal Office where they find Hexadecimal lying near the entrance. Enzo tells Matrix to cure Hex, but he refuses. AndrAIa tells him that Hex is a virus, she may give them an edge against Daemon. He begrudgingly agrees. Once Hexadecimal is cured Welman reforms as well.

Daemon has infected every offline System and Bob has fallen deathly ill from creating so many Portals.

The cured sprites watch Daemon's victory from the War Room. Hex exclaims that Daemon is killing Bob, but AndrAIa says they just don't have the firepower to go up against Daemon. Hexadecimal says she's going to get more firepower and Matrix asks where. Hex tells him from the Core.

Meanwhile, Daemon flies everyone from the portal generator to the Principal Office entrance. She gets Dot to admit she loves Bob and tells her not to worry, for nothing can stop the Word now. Suddenly Hexadecimal, transformed back into her powerful virus form, emerges to attack Daemon. She screams, "Get away from my Sprites!", and shoots Daemon into the city while laughing insanely.

The battle between the two viruses shakes the System. Several buildings are destroyed as they plow each other into the city sectors of Baudway and Wall Street. Some binomes are nearly deleted, including the Baby Binome. Neither virus is able to damage the other and the battle ends in stalemate at the Principal Office. Daemon's time finally runs out. Having reached the end of her life, she utters the word "Cron" and decompiles, in the process causing every infected being on the Net to begin counting down, just like Daecon did. Bob realizes that Daemon was a cron virus and this means that at the end of the countdown, everything will self-delete. The demented Hex, swatting Dot aside, begins dancing with Bob and appears to be on the verge of turning into a threat again until Bob tells her that the countdown means they'll die too.

Realizing their "love" won't survive, she turns to Phong and demands a solution, but the only way to administer the clean code to everyone in time would be to use the Gateway to infect the Net with a benign virus. While this will kill her Hexadecimal decides to do it to ensure Bob survives. She forcibly takes the cure from Matrix saying to him, "Virus hater! Learn from this". She turns to leave but Little Enzo stops her, saying he doesn't want her to leave. She says she adores children and gives the young Guardian a gift, touching his icon and changing it into viral red and black. She tells him it's so he doesn't turn out like Matrix did.

Hexadecimal says her goodbye to Bob, telling him she loves him and asks Dot to take care of him and to be happy together. She then scream to Welman to activate the Gateway, controlling the little Null. The Gateway activates, pulling in Hexadecimal. Welman shatters as she leaves.

Hexadecimal spreads through the Net as her insane laughter echoes trough every system. The entire Net is infected by the Queen of Chaos, defeating Daemon and saving everyone. Her sacrifice brings the Net War to an end.

The Net is cured of the infection but Bob is still ill. Dot begs for him to hold on, admitting her love and asking him to marry her. Before they can kiss, a portal opens and Ray Tracer steps out of it with ... a second Bob, "Marry him? I don't think so!"

The end credits contained a voiceover from Hexadecimal: "I infect the entire Net. I have spread through systems, peoples and cities, from this place: Mainframe. My format... VIRUS! The Queen of CHAOS! AHAHAHAA!" 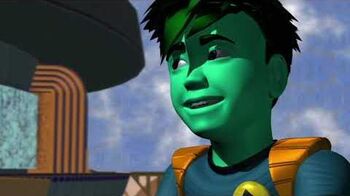