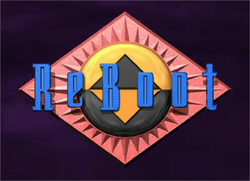 ReBoot is a CGI-animated action-adventure television series that originally aired from 1994 to 2001. It was produced by Vancouver-based production company, Mainframe Entertainment, and created by Gavin Blair, Ian Pearson, Phil Mitchell and John Grace, with the visuals designed by Brendan McCarthy after an initial attempt by Ian Gibson.

It is credited with being the first full-length, completely computer-animated TV series.

ReBoot is a big worldwide success, and is the world's first long-form computer animated piece, predating both Pixar and Dreamworks' later movies. The highly inventive and quirky series really hit its strident stride in the second and third seasons, and is considered a classic example of early steam-driven computer animation. Episodes have been shown and stored at The Smithsonian Institute in Washington DC for posterity. Computer games, toys and motion rides were developed from the series

The setting is in the inner world of a computer system known by its inhabitants as Mainframe. The city is populated almost entirely by binomes, little creatures that represent either 1s or 0s, as well as a handful of Sprites, such as Bob and Dot, who are primarily humanoid creatures of more complex design and are the main characters of the series.

Most of their adventures focus on fighting computer Viruses, such as Megabyte and Hexadecimal, and defending the city from Game Cubes sent by the User.

ReBoot premiered on September 10, 1994 with the episode The Tearing.

The show ran for two years on the ABC Network. They largely restricted the content of ReBoot with over stated censoring of the show. ReBoot had a difficult time growing due to the odd restrictions placed on the networks shows. It was aired during a saturday morning line up. See: Broadcast Standards and Practices

The second season of ReBoot was when the show became famous. A ReBoot toy line was introduced and a video game named ReBoot: Countdown to Chaos was released near the end of the second season. This game was outside the network censors and not restricted in content. Dispite this fandom and success, ABC canceled ReBoot in 1996 when the network was purchased by Disney.

The third season aired in Canada on the YTV Network. The shows popularity continued to grow. It's target audience was changed to children ages 12 and above, reaching more households then ever before.

ReBoot also aired in the United Kingdom. See: ReBoot in the UK

The show was canceled in 1997 after three years of episodes. See: Episode List.

It was latter revived in 2001, with two made for tv movies, each shown in four parts. The first is named ReBoot: Daemon Rising, and the second is named ReBoot: My Two Bobs. They were aired on the Cartoon Network while the previous seasons were shown during a night time line-up.

A third movie and a music episode were slated to be created but the fourth season was canceled before they were made.

In 2008 ReBoot experienced a fan based revival in the form of a web based comic book. They have also talked about redesigning the show, this has produced mixed feelings amoung most fans. The comic book has completed it's first run and seems to have had some success. However, there is no talk of continued additions to the web comic.

The current owners of ReBoot, Rainmaker Entertainment, are now in production of a theatrical movie of ReBoot. The ReBoot Movie is scheduled for release in 2010. On October 5, 2009 Rainmaker released the first trailer for the movie on their website. ReBoot 2010 Trailer