In Dot's Diner several signs direct towards a certain diner booth, in which Enzo is seated, adjusting VidWindows. One of them reads "Enzo's Overwrite Delivery Service." He is trying to start his own business so he can be just as cool as Dot. He gets a call from Megabyte, asking him to deliver a package to Hexadecimal in Lost Angles, and is instructed by Megabyte not to tell Hex who sent it. No one is aware that Scuzzy is spying on the conversation.

Enzo is so excited about his first order that he goes to tell Bob and Dot about it. He accidentally lets slip that the delivery is to be made in Lost Angles, and Dot ropes Bob into delivering the package instead, claiming that the job is too dangerous for Enzo.

At Lost Angles Hexadecimal is trying on masks when Scuzzy enters. He reveals to her that Megabyte is having a bomb in a mask delivered to her. She plans to delete Megabyte and his delivery boy in return.

However, as Bob goes to Lost Angles, Enzo follows him secretly, not wanting to be left out. Bob is chased by Nulls and gets sucked into Hexadecimal's Lair, and Enzo eavesdrops on their conversation. He finds out that Megabyte sent Hexadecimal a mask with a clock in it. Hexadecimal, claiming she already has one, forces Bob to return the mask to Megabyte... while airborne. Enzo remains and hears Hex reveal that she already knows that Megabyte put a time-delete bomb in the mask and that Bob should reach the Tor when the clock reaches zero.

Enzo, terrified, gets back to the Diner as fast as he can go and tells Dot everything. The two head toward the Tor on Zip Boards to warn Bob. Meanwhile, Bob is still soaring through the air, but before he can reach the Tor, the system voice announces an incoming Game and Bob heads toward it. As Dot and Enzo head toward the Tor, they see Bob steering toward the Game. Dot sees that their only option is to enter the Game and warn Bob there.

The Game is a Formula One Game, and when Bob reboots, the bomb-mask becomes part of his car. Dot and Enzo have no interest in winning the Game, they want only to warn Bob of his impending doom. Three levels into the Game, they finally manage to do so, but the bomb explodes before anyone is able to do anything about it. Luckily, Bob was out of his vehicle at the time. Since tears can't form inside Games the explosion causes an Infinite Data Else-If Loop and the Game Cube gets sucked into itself. Bob, Dot, Enzo, and all the players run to the outer wall and manage to get out before the Cube shrinks and implodes.

Meanwhile, at the Tor, Hack and Slash hold up an enormous bomb in front of Megabyte, stating that Hex claimed she already had one. It explodes in a column of fire blowing the top of the Tor off. 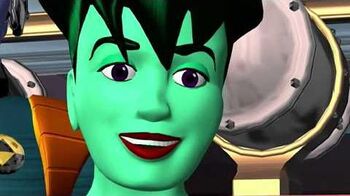