Quick and the Fed

Megabyte has processed a dangerous magnet, and is trying to use it to power a Magnetic Generator to make a hole in the system to access the Net and the Super Computer. As the energy beam is activated Megabyte talks to his pet null Nibbles. Fortunately, Bob catches him in the act. A scuffle ensues, and Bob takes the magnet away from Megabyte and shields in a protective casing.

When he returns to Dot's Diner, Enzo inquires what Bob has in the shielding. Bob tells Enzo, terrifying everyone in the Diner, but when Bob assures them it's shielded, they relax. He notices Enzo admiring Glitch, so he removes Glitch from his arm and lets Enzo try it out. Enzo makes Glitch shape-shift into a flashlight, a hammer, and finally a jackhammer. The jackhammer shakes the diner up so much that the magnet's shielding opens and the magnet attaches itself to Dot's forehead. Bob makes Glitch remove the magnet before it does permanent damage.

Bob summons a doctor, then goes to see Phong to find out what can be done about Dot's condition. He finds out that he needs to go to Al's Wait & Eat cafe on Level 31 and access some really, really, really slow food to return Dot to normal. Bob returns to the Diner to tell Dot, and she tries to say something, but Bob shushes her, telling she needs rest. He then heads to Al's Diner.

Bob finds out there's a long, long waiting line for slow food at Al's. Al's Waiter is no help in hurrying up the food and Al himself operates the stove and only runs a three decahertz. Bob is forced to wait. Hack and Slash show up looking for Bob and threaten to trash the place unless the find him. Bob makes a deal with Al's Waiter: if he gets Bob some slow food, Bob will get rid of Megabyte's goons. Al's Waiter agrees, giving him a package of slow food. Bob leaves Al's Diner and Hack and Slash chase him. Then a Game Cube enters the system, and Bob hurries inside. Hack and Slash try to follow but are too slow, and smash against the Cube's outer wall.

The Game is Castles and Knights. Bob reboots as a knight. As soon as he reboots, he hears Dot's voice calling for help and runs toward it. He grabs a dragon, which is operated by Al and his Waiter, and heads for the castle. After a dragon-joust with the User, he enters the castle, defeats a skeleton warrior, and runs up to the tallest tower to find... Enzo as a damsel in a dress. Dot, seemingly cured and rebooted into a knight, is busy sword-fighting the User. Too surprised to ask questions, Bob aids her, and they discover the User's weak spot is his Icon. Bob and Dot hit his Icon multiple times, and the User is finally defeated when Enzo throws his megaphone at it and knocks him out the window.

The Game leaves, but Megabyte, Hack, and Slash are waiting for them. Megabyte complains that it took him a lot of time and effort to acquire the magnet, and demands it be returned. Bob has Glitch throw it at Megabyte without its shielding and it drains him of energy. He falls off the city level, and Hack and Slash jump after him.

Bob finds out that Dot got the cure faster because Dot is Al's business partner. She hints that she owns more of Mainframe than anyone could imagine. 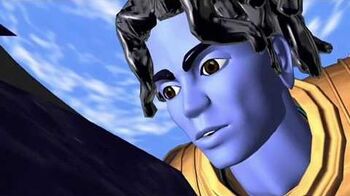