At the Archives three CPU guards are talking while having their lunch. They are talking about the Web. Before they can finish Hexadecimal appears, in front of them and they scream.

At Floating Point Park, Dot is leading a jogging group around the park. She urges them on for one more circuit and Number Eight stops just long enough to say, "I eight exercise".

Bob is at Dot's Diner and his car problems seem finally to be over. His car has been traded in for a red bike. Though it seems he will miss his car, he knows the bike is more practical. Then he notices a sun being painted into the sky. He calls Phong, who tells him Hexadecimal has broken into the Archives and infected the System Paint Program. She is operating it by linking it to an alias in her Lair. The guards have apparently been kidnapped by Hexadecimal, who is currently wreaking havoc on the system using the paint program.

Hexadecimal wants recognition for her talents and turns to the Silicon Tor using the program. She paints the Tor yellow, with her name emblazoned on the top and inserts massive sunflowers into the top of the tower, turning it into a massive flower pot. She then proceeds to literally make a clown of Megabyte, painting a white smile on his face and yellow and red jester clothes on him. Then he is copied and pasted into Mainframe's sky as a still painting.

Bob is still talking to Phong. Phong alerts Bob that the damage Hex is doing will become permanent with the next scheduled system backup. Phong can break the link to the Lair but first Bob must perform an "undo" command, returning everything to normal. He is about to tell Bob something crucial when his head gets replaced by an apple and is pasted into the sky next to Megabyte. Hexadecimal cracks a joke about Phong being the true keeper of the core.

Bob tries to contact Dot to get her to help him, but Glitch melts off his wrist, he tries a VidWindow but it slashes with black paint on the screen. Then Bob's new bike melts and so does Enzo's zip board. Communications go down, as well as transportation. Bob charges Enzo with finding his sister and telling her to break the link to the paint program, but not before she receives his signal. He's not sure what that signal will be yet.

Mainframe becomes Hexadecimal's canvas, which she lavishes with painting styles that are known throughout art history. She has the binomes she kidnapped in her lair, which she has integrated into her paintings. Large lines of paint circle through out the city. Baudway Sector is buried under paint. The Principal Office has the touch of life painting of God and Adam painted on its upper dome.

Bob plans to go to Hexadecimal's Lair, and somehow get to the paint program and undo the paint in the city. Dot takes Enzo with her to the Archives while Bob goes to Hex's lair with Mike the TV, whom he snatches away from a film set. While Bob and Mike are walking to Hex's lair, Bob discovers that carbon copies of himself are being made in a line behind him as he walks. He takes Mike's video camera, puts it to his eye, and steps forward. A carbon copy is made. Bob picks it up and takes it with him.

At the Archives, Dot and Enzo find the security system has been completely destroyed. As they enter Frisket shrinks to the size of a mouse. They find the Archives are in complete chaos. Enzo tries to use some of the scattered vidwindows as steps, but falls and lands in a series of vidwindows that end up making up parts of his body.

Bob and Mike have arrived at Hexadecimal's lair and find Scuzzy guarding the entrance. They laugh at the thought of the tiny familiar trying to stop them. Scuzzy comes forward and grows to the size of a small house, showing a mouth full of sharp teeth. They run and split up, so Scuzzy copies himself and chases both of them. Hexadecimal notices the commotion outside and stops Scuzzy just as he is about to eat Bob and Mike. Scuzzy joins back into one and shrinks to normal running back inside the Lair. They tell Hex they are there to do an interview on her. She is flattered and agree, bringing them inside the Lair, and they begin to interview Hex. Bob substitutes the carbon copy of himself for himself and goes to mess with the paint program application Hex is using.

Mike is still interviewing Hex. Hex tries to get Bob's attention, and when he doesn't reply, she realizes that she has been duped. The carbon copy of Bob falls over. Hex flies into a rage, completely upsetting her lair. Bob hits the undo button for the paint program. As Hex approaches Bob, he cuts and pastes her mask, using the paint program, into a VidWindow. The manoeuvre incapacitates Hex, who clutches at the gaping hole where her mask was and screams in agony. However, Bob hears her program tell him that she cannot exist without her mask - without it, she will overload and be destroyed.

Back at the Archives, Dot is running toward the paint program window when a storm seems to erupt among the windows in the archives. Enzo says that Bob must have hit the undo command because everything is going back to normal. With Frisket's help Dot reaches the window, barely, and breaks the link.

Bob attempts to replace Hex's mask, but the windows close before he can do so. Thinking quickly, he calls for Glitch to return and uses it to copy/paste Hex's mask back onto her face. She collapses on the floor of her Lair, drained and unable to do anything except curl into a ball and shy away from the world - even the attempted comfort of Scuzzy. Bob departs from the Lair and contacts Dot and Enzo. She says everything is okay and nobody was hurt. Bob tells her that Hex is in a bad way, but he got her the best help he could: he's left Mike the TV with her to try and keep her entertained. 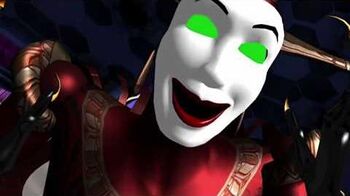 Retrieved from "https://reboot.fandom.com/wiki/Painted_Windows?oldid=18814"
Community content is available under CC-BY-SA unless otherwise noted.