It's a lovely blue sky with thin white clouds and soon turns to Game Cube purple and black.

Another new voice intones the 'Warning, Incoming Game". The Game Cube descends on a world completely covered with big dish radio antennae. There are no sprites or binomes in sight in the Satellite System.

Matrix, AndrAIa, and Frisket are in a glass-walled elevator rising up the central spire of an antenna. Once again Matrix's negativity is showing. They've left with the game five times now, and the User keeps putting the same game cube back into this same system.

Inside the Game is a series of floating golf-course links. "Oh, great. Another golf game." Glitch doesn't work at all in this game, but AndrAIa has noticed something a lot more important, Mainframe. Or at least an incredible simulation. They walk to the edge of the lawn and look down on the same Principal Office. It looks like Mainframe, but can't be.

AndrAIa and Matrix are debating its existence, when they are distracted by Hack and Slash being chased by Bob and Dot on Zip Boards. Bob says, "we'll never catch them". Then Dot winks, and says "Oh, Bob! I have never seen you so angry. Please don't hurt Hack and Slash when you catch them," obviously wanting to be overheard.

Of course, the two bumbling mechanoids start arguing with each other allowing Bob to sneak up. He's not really angry at them, but has them "assume the position" and uses Glitch to knock them, golfball wise, into the top of the Tor. Just before he declares a hole in one, Bob circles his eye with thumb and forefinger, and calls out, "be seeing you".

Matrix does not believe it is possible to have the entire city as game sprite mode. "The city is firmware, that wouldn't explain Bob, or a functional Glitch." AndrAIa wants to reboot to see what happens, but Matrix is afraid to, he might turn up as little Enzo, and he claims that he has put "that weak little boy" behind him. But it's the only way to find out.

The three reboot simultaneously. Frisket turns into Scuzzy. AndrAIa is wearing Hexadecimal's old red costume, and Matrix is the blue metallic Megabyte. "We've gone viral. I guess this rules out the family reunion."

Phong is discussing with Bob and Dot the ramifications of Hexadecimal and Megabyte teaming up. The last thing he says is that they must not find out about Number 1 when it becomes obvious that this scene is being replayed on Scuzzy's projection dome. "Stop replay, Scuzzy" says AndrAIa in Hex's voice. Frisket hates being called by that name, and "Scuzzy" displays his fangs. Matrix is sitting in Megabyte's throne.

Locating Number 1 must be the objective of the game, but Matrix isn't so sure. His statement triggers more useless chatter from Hack and Slash, which is silenced only when Megabyte's voice yelling "will you two imbeciles be quiet?!". They give the "be seeing you" sign and exit. AndAIa is shocked at this and Matrix, back into his own voice, says that he was just trying to quiet them and that he didn't truly mean to frighten them.

Back in the Principal Office, Bob is remarking that Megabyte's change of face is more like Hexadecimal's actions. They are interrupted by a binome warning of an incoming bogie.

Matrix/Megabyte flies in on the virus' bike. He goes down a hallway and bursts through the door, talks a bit, and puts his fist down on the table, causing the tea cup to bounce.

Matrix tries to talk to Bob, and get them to trust him. "Why should we trust you, Megabyte?" asks Dot. Bob and Dot refuse to believe that Enzo is under Megabyte's skin. Instead, Bob yells out "Your cycles are numbered, Megabyte!" and attacks him with an energy beam. Matrix/Megabyte roars in pain and rage as he is forced to retreat, his image shows up on a VidWindow, and the picture gets X'ed out. Phong declares that he must be filed and indexed. Dot says "be seeing you". Matrix gets picked up by a large mechanical arm and as he is being carried to the file cabinets, he calls out, "No! I will not be pushed, filed, stamped, indexed, debriefed or numbered. My life is my own. You won't hold me!" He infects the arm and escapes.

AndrAIa is in the Silicon Tor, sitting in a hemispherical red chair. She thinks she is in touch with her emotions, but Hexadecimal's voice keeps coming through. Matrix drives Megabyte's bike through a hole in the ceiling, and as it shuts down AndrAIa remarks "That's a nice bike!" "What is it with you and bikes?" Matrix wonders. Hexadecimal states the advantages of being like Megabyte. Matrix rejects that, declaring that he will prove to them that he's Enzo... even if he has to delete them all to do it!

Phong decides Bob and Dot should meet Number 1. Matrix and AndrAIa follow them from Al's Diner to Dot's Diner. Matrix/Megabyte bursts through the front door and finds...

... a dimly lit room with Cecil and Mike on a teeter-totter, a jury of 12 binomes with face masks (half black, half white), Dot scowling sternly, a giant One (in charcoal and grey), two pits with poles sticking up, and Bob as "Da Judge".

Matrix looks baffled then says: "Where is Number One?" as 12 binomes sing "Here Comes the Judge" to reveal Bob as "Da Judge" to silence in court. The defendant is charged with believing that the ends justified the means and with becoming everything he claims to hate. Hack and Slash appear from the pits as character witnesses (singing "Dem Bones") but don't help his case. The jury declares him guilty. Dot strikes Matrix/Megabyte on the chest, then is vanishes when he grabs her. The entire courtroom gets slashed by Matrix in the smoke burnished way, leaving only Hexadecimal's face. She, too, disappears, leaving Matrix alone. He demands to know who is Number 1, and sees a reflection of himself in a VidWindow. Megabyte's voice explains that he, Hatred, is Number 1. The apparition of Megabyte is replaced with one of Matrix, who accuses him of loving only himself. The apparition is replaced with the original Enzo (wearing 01 on his shirt) who argues with Matrix.

Matrix: But how? You're me!
Enzo: But you hate me. You must! Look at what you've become.
Matrix: You're wrong! I had to become bigger, tougher. I had be ready for Megabyte, to survive the games!
Enzo: Did you like the games more than Mainframe? More than your family?
Matrix: No! No I didn't. I was trapped in the games...
Enzo: Games, games, games. It was only a game. You killed my family!
Matrix: My family!
Enzo: You've forgotten your family! You let yourself become a prisoner of the games. What would Bob think of you now?
Matrix (softly): Bob...
Little Enzo's last line is: "There can be only one. Be seeing you." He throws a golf ball at Matrix that grows into a white blob as it bounces towards Matrix and smothers him.

Matrix wakes up on a golf course. AndrAIa is standing over him and laughing. She says, "The mighty Matrix was knocked for a loop by an errant golf ball." AndrAIa tells him the whole experience was all just a dream; they're on the final hole of Fairway Frolics. Their opponents are a plush tiger and a shark, and AndrAIa is about to finish the hole and win the Game.

Matrix declares that they're taking control, and that the search for Mainframe, and Bob, needs to get serious. He asks, "Now, who hit that golf ball?" and pulls out his Gun, scaring the other golfers away. His targeting computer rotates into view, and Matrix blows away the game with a final "Be seeing ya!" 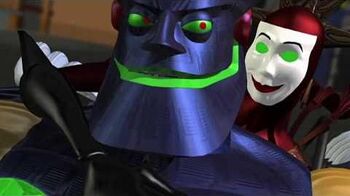