Mike the TV is still at Hexadecimal's Lair. Hexadecimal seems to be much better. She is gazing into her Looking Glass showing how easy it is to find the Super Computer. Hex says the powerful system bores her and demands Mike to show her something interesting. Mike shows her a movie called 'Bride of Frankenome', and Hex screams she's seen it before, and liked it. She demands something else, so he puts on Wagnerian opera. The "prima donna" on the screen sings so piercingly high that Scuzzy's dome and Hexadecimal's looking glass shatter, revealing a creature behind the glass. The creature leaps on her and infects her, turning her black. Outside the lair, the nulls go berserk and all rush to protect Hexadecimal, all leaping on her body.

At the Silicon Tor, Hack and Slash are telling Nibbles a story. He suddenly stiffens, looking up. Slash thinks he is paying attention, but then the null leaves. The two bots are sure Megabyte will grill them for this, so they run off after the null, hoping to find him before Megabyte finds out he's missing.

At the Principal Office, Phong is working on a way to turn nulls back into Sprites. His investigations are not progressing. Suddenly, AndrAIa, who is standing nearby chatting with Enzo, freezes and puts her hands over her ears. The nulls in the chamber Dot is working on start going crazy, trying to get out of their prison.

Back in the Lair, Hex is being completely covered by nulls as she screams. Mike the TV and Scuzzy flee the Lair in terror, and run into Hack and Slash, asking if he has "seen one", presumably Nibbles. Mike replies, "Have I seen one? Have I seen one!? That's a joke right? Hack, Slash, it's your lucky day! You were looking for a single null; but how about two million? It's Nullzilla!" He turns around to reveal a giant null monster.

Bob, Dot, Enzo, and Frisket arrive and question Mike and Scuzzy about Nullzilla. Mike quickly explains how the creature came to be, but neglects to mention that it was his fault. They all go to the Principal Office.

In the Principal Office, Phong takes everyone to a VidWindow and tells them about the problem and says he has a solution. Phong takes them to his office, where he suits up everyone, except for AndrAIa, in battle uniforms. The sprites then get into battle droids, each taking after an insect: Bob is a beetle, Dot is a ladybug, Frisket is a bumblebee, Enzo is a grasshopper, and Mike is a pesky gnat.

Nibbles returns to Megabyte, who does not question where he was. Megabyte strangely calls Nibbles "father". The strange creature that infected Hexadecimal comes to Megabyte and merges with him. Megabyte becomes black with red eyes and gold teeth. 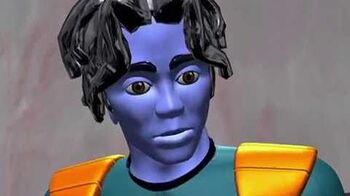