Null Bot of the Bride

Dot Matrix, AndrAIa and Mouse are preparing Dot's wedding dress for the wedding. Cecil comes by with Bob to point out that having the wedding in the war room is a horrible idea. He pushes them into having the ceremony in the Principal Office entrance hall. Bob and Dot thinks it might be a little too much, but Cecil insists.

Meanwhile, in the Super Computer, 'Glitch Bob' is in critical condition and losing energy fast. The Guardians keep trying, but there is nothing that can penetrate whatever is covering him. Everything the medical Guardians try damages the equipment rather than freeing him.

Back in Mainframe, Bob asks Matrix to be his "Best Sprite", but quickly changes it to Little Enzo when Dot asks Matrix to walk her down the aisle. Dot and Bob celebrate their bachelor and bachelorette parties while Cecil decorates the Great Hall. After seeing the great things Cecil did to set up the hall, Bob and Cecil have a friendly moment with each other, which neither particularly liked.

Little Enzo decides their father has to be allowed to attend the wedding even if he is a mindless Null. When he opens the cage Nibbles jumps out and Little Enzo accidentally grabs him, sending the code left in his icon by Hexadecimal into Nibbles, enabling him to talk and allowing him to remember that he is Welman Matrix. Just before the wedding begins, Phong builds a robotic suit for Welman to sit in as he takes his daughter down the aisle.

Back in the Super Computer, Turbo says his goodbyes. While Bob is having a bizarre dream where he is confronted by a giant-sized Glitch, the missing Guardian Key Tools emerge from Bob and revive him along with an updated Glitch, then return to their Guardians. The Guardians check him, but discover that his web-degraded code doesn't match what they have on file. Turbo believes that it means this Bob must be the copy.

At the wedding, just as Bob and Dot are about to kiss, the other Bob appears, adding confusion to everything. The other Bob asks Dot to take him back, but she tells him she's made her decision. Just as Bob is about to leave, Glitch flies towards the Bob that Dot is marrying.

As Phong begins to continue the service, Glitch starts spinning its screen and the groom screams out in pain. Glitch takes some code from this Bob and returns it to the first Bob, causing him to change his appearance to the original Bob. The second Bob screams in pain as his form distorts and suddenly completely changes revealing that he is actually Megabyte in disguise. Everyone is in shock, especially Dot. Megabyte has changed in appearance since he was taken to the Web. He seems disappointed that his "charade is at an end".

Bob clashes with Megabyte in a spectacular fight, while the wedding guests quickly try to evacuate the building. Amidst all the chaos Dot stands motionless, in shock and disgust over what she almost did. Bob flings Megabyte out of the Principal Office, running after him close behind. The fight stalls long enough for Bob to ask why Megabyte did this, the virus responds that "It amused him". Knocking the cities defenders away, Megabyte grabs Dot and gives her a kiss. He then runs back into the building telling everyone to leave, but grabs little Specky.

Bob and Matrix run after Megabyte, finding Specky under some ruble, silent and motionless. Dot mentions how she already saw Specky outside. Bob realizes that Megabyte has upgraded and now has Trojan Horse abilities, allowing him to take the shape and of any sprite or binome he wishes. As Specky comes to, Bob says that Megabyte has shifted again. Dot asks Bob what they are going to do, and he responds that he has no idea. 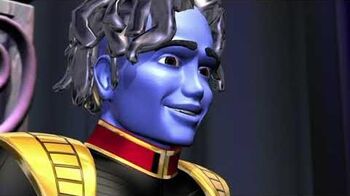