Dot, in civilian garb, walks into her Diner, and her entrance is greeted with the sounds of a live studio audience. In the background, Little Enzo is seen dragging Nibbles through the air as he flies around on a Zip Board. The audience 'boos' at Cecil's protestations, then laughs at Enzo's declaration, "Hey, it's Cecil, our foreign stereotype comic relief." Glitch Bob's entrance is greeted with silence, but Guardian Bob gets a roar of approval. They both vie for Dot's attention. "Oh, no! Two Bobs? How can this be?". Matrix and Little Enzo both lean into the frame and chime in with "Don't ask us!" Cue sitcom music. Nine faces are shown: 'Glitch Bob', Dot and 'Guardian Bob' in the middle row, little Enzo, AndrAIa and Matrix in the top row, and Phong, Nibbles and Frisket in the bottom row. Display title: My Two Bobs!.

The sitcom image fades away to show Dot, lying on an analyst's couch in Phong's Office. She is trying to sort out her feelings at the prospect of having two Bobs to decide between. When she refers to them as 'Bob' and 'Glitch Bob' Phong remarks about the interesting choice of names. Dot tells Phong he knows what she means, to witch he replies that "he knows what she means, but the question is, does she?" Dot looks unsure.

Meanwhile, the two men in question are sitting at a table in Dot's Diner, trying to make small talk and get to know each other. Their almost identical personalities leads to both Bobs talking at the same time. The existential discussion as to which one is a copy of the original is interrupted by an incoming Game Cube.

Over in Lost Angles, flashes of light illuminate Matrix, running and ducking from sniper fire. The attackers are Mainframe's CPU force. It appears that the adrenalin junkie has ordered this exercise to include the use of live ammunition. This situation is "totally 8-bit". AndrAIa tries to calm the keyed-up fighter. She asks Matrix why he is doing this, he tells her it's training. AndrAIa explains to him their enemies are gone, they won, and can now relax. Matrix is unsure what he should do now that there is no one to fight.

Five combatants head for the incoming Game: Enzo, both Bobs, Matrix and AndrAIa. Matrix orders his younger self back, citing the unknown nature of Hex's change to Enzo's icon as the reason. Dot shows up and repeats that order. She also orders 'Glitch Bob' to stand down; she is certain that he will once again be unable to reboot into Game mode. Dot orders sends just Matrix and 'Guardian Bob' into the Game, and of course, Frisket makes his own decision to join.

Since Cecil refuses to serve 'Glitch Bob', AndrAIa escorts him and Enzo to Al's Diner on Level 31 to get an Energy Shake. The music coming out of the joint makes it sound like a disreputable road house. An "&" gets thrown out. Al's Waiter intones, "&, stay out!"

Without Glitch, Game stats inside the Cube will be hard to come by, but Matrix recognizes it as the dojo level of Patsu Heavy X. Rebooting reveals a twist. Frisket, the big ferocious dog, turns into a cute little yellow and red creature with a lightning-bolt tail. He keeps going "Frisket, Frisket, Frisket-Chu!. Matrix turns into a flat, two dimensional, monster trainer, and Bob turns into a baseball-sized dodecahedron. Matrix explains, "I keep you in that tiny container, and release you to fight for me." Bob echoes "You keep creatures in cages, and release them just to fight?" Matrix says yeah. Bob tells him, "That is sick!"

The User is a short guy with blond spiky hair. Matrix releases Bobzilla, a Godzilla-sized blue dinosaur-like creature with Bob's face. The User's monsters attack Bobzilla with laser eyes and flame breath, Matrix orders him to use his Atomic Nostril Blast - big green snot that covers the other monsters. When the third monster attacks, Matrix suggests Bob use his Nuclear Bottom Burp. The approaching slug is reduced to particles from Bob's flatulance.

The Binomes that frequent Al's Place are a sorry lot. Many of them have drank themselves into a stupor, and the ones still standing reminess about the good old Viral days, back when the uniform brought respect. Glitch Bob's self respect is deflated a bit by the swishy waiter's talk that being a copy isn't so bad; and to "just be true to yourself."

Back in the Game, the User has 150 fighting monsters to the Mainframer's one. Bobzilla asks Matrix to help out, but the green guy says he can't; the rules are clear. Bob points out that Matrix is a renegade, he should cheat. Right! What follows is an interminable sequence of Matrix flying through the air with his feet aimed at the User. Turns out this is a cheezy moving background powered by a boinging Frisket-Chu. Matrix finally gets in one good punch, but the User pops back with typical video-game fighting feints. The battle is cut short when Bobzilla stomps on the User. "You know Bob, I don't think you're supposed to do that."

Dot's therapy sessions with Phong are not going well. The second Bob had messed up her plan. 'Glitch Bob' invokes memories of the bad times, the horror of the recent battles. 'Guardian Bob' brings back happy memories. She says its like coming home. 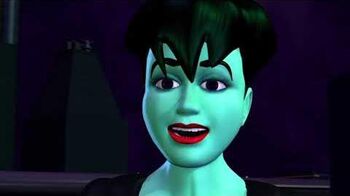