A portal forms above the Energy Sea and the pirate's ship Saucy Mare comes out. Bob is saddened by the sight, the buildings of Wall Street sector are smoking ruins. AndrAIa leans on Matrix for support. Every sector has been destroyed. AndrAIa works on fixing the ship while Bob and Matrix go investigating. In sector Giedi Prime, the firewall is gone and the top of Silicon Tor has been broken off. Bob uses his Glitch powers to repair several small tears with beams of light from his hands. They figure that Hexadecimal must have broken free and blown it apart from the inside.

Flashback: The firewall is still intact and the Tor is in perfect condition. Explosions burst out from the base of the Tor and Hexadecimal flies out. She has broken loose from Megabytes restraining collar and is mightily upset. She raises her hands and unleashes a fireball. It blows the Tor in half and it lands in front of the building's base, skidding to a stop. The next fireball goes up into the firewall, overloading it.

Present: Matrix walks over to a burned-out firewall generator. They notice that Hex had reinforcements, tracks from a horde of Nulls.

Flashback: A single multicolored null joins up with a vast horde of nulls covering the streets. Hexadecimal's demented cackle warns Hack and Slash that they are in big trouble. With little effort, she blows them to bits. The army of Nulls joins in a mass arm, knocking one of Megabyte's ABCs out of the sky. The Nulls swarm over the Armored Binome Carrier, and just like that, it is gone.

Present: The two men head for what's left of the Principal Office. The building is blackened with scorch marks and filled with holes. Inside, a viral Binome is informing his superior, Megabyte, that Bob is back. This delights Megabyte, since it implies that 'Megaframe' is back on the Net. He declares that it is time to leave.

Strands of barbed wire surround the Principal Office, watchtowers and flying ABCs maintain the perimeter. Matrix is spotted, he fires back at the searchlight, but that causes the air-raid siren to go off. Matrix knocks down an ABC with his Gun, then gets knocked off his zipboard. A second ABC has him in its sights, but he is saved by Bob projecting a force field. With one hand, Bob wipes out the ABC, then stabilizes a small tear into a portal. The "rebel scum" jump through the portal and end up ... elsewhere in Megaframe.

The two Guardians are closer to the Principal Office and see that Megabyte has set up residence there.

Present: Bob and Matrix find a piece of the Principal Office in the street. Bob questions, "Can it get any worse?" but is interrupted by a voice commanding them to "reach for the sky". They both turn and see Hack and Slash. The two bumbling henchmen look a lot worse for wear.

Meanwhile, Herr Doktor is tightening bolts with an air gun and eating a sandwich when Megabyte shows up. He tells "Mein Grossen Biter" that they can make suitable tears but they need the command codes to turn them into portals to the Net. Megabyte says it is time to talk to "the head".

Matrix pulls his Gun and aims at Hack and Slash, but Bob reminds him that they weren't that bad. They recognize Bob's voice and start fawning all over him. Matrix introduces himself, explaining he's Enzo, then all four go to see Dot.

Dot is in command of the rebel forces. They are in a warehouse, a big empty room lit by bare lights. Specky is getting intelligence reports for her when the door opens. Guards on the wall aim their guns at the intruders but its only Hack and Slash. Dot turns when they tell her they brought a surprise. Matrix steps forward; she blinks at him puzzled. Matrix calling her Sis is enough for her to recognize him. Dot begins to cry and gives him a hug. Bob turns out to be preoccupied, Mouse has latched onto the guy, giving him a great big kiss. Dot and Bob share an awkward reunion, with him trying to hug her and she reached her hand for a handshake. Bob asks where Phong is.

Flashback: The Principal Office defenses have failed, viral troops have entered the building. In the War Room Phong orders the building to be evacuated. The order goes out, "Evacuation code 9713". A hidden door appears and all leave except for Phong who plans on buying time for the others. He commands Hack and Slash to be Dot's bodyguards. They disappear down the tunnel and Phong quietly turns toward the banging on the door. Megabyte tears through the main door, unleashing his claws.

In Principal Office, "the head" turns out to be Phong, minus his body. He's been kept alive, floating in a jar filled with a liquid. Megabyte politely asks for the codes, and when Phong refuses, orders the extraction device to be used. Bunnyfoot throws the switch, Phong is bombarded by electricity and screams in pain. A decoder board lights up. It forcibly pulls the information out of Phong, sixteen sets of seven bits, one bit at a time.

Dot is sitting alone in a room, with a tear running down her cheek. Mouse strolls in and demands to know what's bugging her. It's not the kiss Mouse gave, Dot feels she let Bob down when she stopped believing in him and gave up hope. Mouse tells her to go to him.

Herr Doktor gets the eighth character of the code out of Phong's brain and completes Phase 1. The Sub-Sphere above the Principal Office shatters, and a tear rises out of the hollow. It is visible from the Saucy Mare and the ground. Bob says he knows Phong has to be alive for them to have gotten the codes.

Bob states that they don't have much time, then disappears into thin air. He reappears in Hexadecimal's Lair. The virus complains that she was so bored with Bob is gone, but now it is going to be interesting. Insane laughter fills the room. 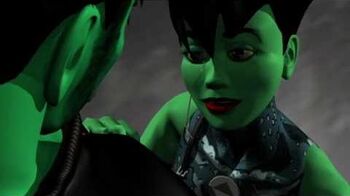