Dot is in a lab room talking to Nibbles, hoping that somewhere her father could see and recognize her. Phong tells her that with Hexadecimal gone, Welman has reverted to his Nibbles persona, but that recent events have proven their theories on nulls are true. He reveals to her that the Tech Boys have developed a Game Sampler to download Game codes to attempt to reverse the nullification process. Dot is hopeful for the plan, but laments that it wouldn't help her father since he wasn't nullified by a Game.

In front of Dot's Diner, Mike the TV is giving a newscast on recent events, specifically on Hexadecimal's sacrifice and asking the question of what exactly she did to Little Enzo’s icon.

In the War Room, Dot is talking to Mouse about her dilemma with two Bobs. Her big problem is that one Bob looks like the one she remembers, while 'Glitch Bob' is different. Mouse asks about Phong's advice but Dot dismisses it as being too simple, ‘Follow your heart.’ Mouse agrees with Phong and tries to get her to just make a decision, but Dot is too preoccupied with both of their feelings.

Phong is trying a new method of reversing nullification when 'Glitch Bob' shows up. He wants Phong's help in separating himself from Glitch and they both admit that it has never been done before. 'Glitch Bob' is frustrated that he feels like an outcast because the other Bob looks like the original, and he is certain that Dot is more partial to the other Bob. By separating from Glitch he feels that it is his only chance to win Dot's affection. He wants access to the Archives to improvise some method to get the separation done, but Phong hesitates. He accuses Phong of believing he isn't the original, but Phong is able to avoid the question when an alarm goes off.

The alarm is for a build-up of Game energy, and Phong is called away to use the data storage device in the Game. Matrix, 'Guardian Bob', AndrAIa, Hack and Slash are also on hand. Little Enzo, against everyone's wishes, slips into the Game as well. The Game is a new version of Rocky The Rabid Raccoon 2, where they have to face off against the Rocky as toys and other household items. Matrix becomes a Darth Vader-esque figure, Bob becomes a GI Joe, AndrAIa a Barbie doll, Phong a cup of yogurt, and Hack and Slash turn into soda cans. Enzo, despite everyone's fears about his changed icon, reboots normally into a marionette. Phong sets up the device and everyone prepares to confront the User.

'Glitch Bob' discusses his situation with Mouse and tells her his idea to separate from Glitch. When he tells her that Phong didn't, or wouldn't, give him the password to the Archives Mouse hacks into the storage facility for him. 'Glitch Bob' begins working. He tries a variety of tactics that end up doing absolutely nothing. Upon further research, he remembers the way Gigabyte was split into Megabyte and Hexadecimal when he split a portal. (Gigabyte) He decides to do the same thing.

In the Game, things are hectic as everyone is working to keep Rocky from his goal of getting to the cookie jar. Little Enzo surprises everyone by roping Hack and Slash and using their carbonation to create a powerful rocket vehicle for himself, and effectively takes one of the User's lives. In the end, they all have to work together in a cartoony fashion, including using a thanksgiving turkey robot to finally beat the Game.

'Glitch Bob' activates the portal generator in the Sub-Sphere and creates a portal that loops back to Mainframe. After entering, he uses the Glitch command ‘splitter’ and it backfires horribly, detonating the tear and causing 'Glitch Bob' to fall from the explosion encased in a hard black shell.

Everyone runs to his side, but no one has a clue what happened to him. They call for the Guardian medical teams and AndrAIa attempts to pierce the shell with her claws, which doesn't work.

Later, Turbo tries to comfort Dot with the fact that their best teams are working on 'Glitch Bob'. 'Guardian Bob' feels responsible for the actions of the other Bob and suggests he should stay at the Super Computer for a while. Dot stops him, admitting that she doesn't want him to leave her. She says she loves him and always did, and he returns the sentiment. They share several passionate kisses, and Bob asks Dot to marry him, which she accepts. They share one more kiss. 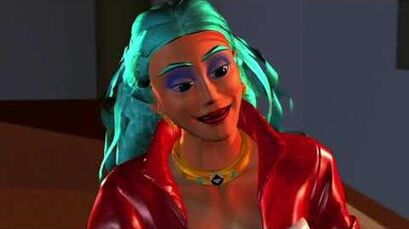