In the Belly of the Beast

When Bob enters the Diner, everyone is overwhelmed with his stench. He explains that he was at the Data Dump taking care of Hack and Slash. At that moment Frisket enters the Diner, looking very green. Dot immediately notices something is wrong and has Bob use Glitch to examine him. He finds that the UNFORMAT Command that Frisket swallowed is trying to reformat his stomach. He gives Frisket some medicine and the dog runs off.

Frisket goes to meet Enzo at school, but on their way back they run into Hack and Slash who capture Enzo to lure Frisket to Megabyte. As expected, Frisket goes along with them. At the Silicon Tor, Herr Doktor latches Frisket to an operating table so they may remove the UNFORMAT Command from Frisket's system. Enzo, appalled, does a yoyo trick that releases Frisket and the dog immediately overpowers Megabyte's men.

Enzo and Frisket head for the ventilation system and slide down into the bowels of the Tor. They chance upon the armoury, where they use an inflatable raft machine to incapacitate some virals. Then they cut the power to the Tor, plunging Megabyte and his minions in darkness. Megabyte rushes to where Enzo and Frisket are, but Enzo cuts him off, flying an ABC very badly. With Frisket's help, Enzo outsmarts Megabyte and manages to escape. Just before they leave Frisket unloads what's left of the UNFORMAT Command and begins to feel better. Megabyte calls off the search for them after he steps in the remains of the command.

Enzo returns to the Diner to greet a very relieved Bob and Dot and tells them all about how they outwitted Megabyte. 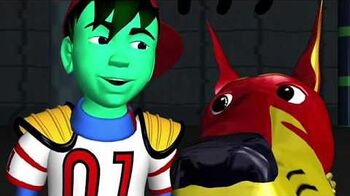