Dot and Bob are standing before The Funhouse. Bob is freaking out but Dot remains detached and despondent. She is still feeling sorry for herself because of the loss of Giedi Prime's PIDs.

Bob reboots into a clown and convinces Dot to do the same, and suddenly they are attacked by the User, an evil clown, throwing exploding pies at the two sprites. The User quickly enters the circus tent and Bob and Dot follow, emerging into a round chamber surrounded with closed doors. Only one door leads to the final chamber; the others will hold the door opener captive. Bob opens a door and is captured and made into a marionette. It is now up to Dot to win the Game.

Dot is completely disheartened. She does not trust herself to win the Game because she failed in trying to save the citizens in sector 1000 of Giedi Prime. About to give up, she turns around and sees... Phong. He puts two small circular discs against her temples and there is a flash of light. Phong vanishes, and Dot hears the System Voice say, "Game Over, User Wins" as she blacks out.

When Dot comes to, the Game is over, and she has lost. She climbs out of the hole created by the Game Cube, astounded that she has survived. She heads to the Diner, noticing something very strange about Mainframe as she goes; all the citizens have barcodes, even Frisket. Everyone seems to be disheartened, being led along by viral binomes, the only inhabitants to have their icons. Mainframe is now named Megaframe.

Dot runs to Baudway Sector to find that her Diner has been renamed to Nibble's Diner! She enters and finds that the interior looks like the interior in her first vision. She sits down and a server unit approaches. Dot thinks it's Cecil and calls to him. The unit corrects her by saying his name is Service Entry Unit 26. She starts asking questions about the diner and Mainframe, but the people laugh at her. Unit 26 explains that this is Megaframe. An older, tough-looking Enzo enters. He is a brute, and does not recognize Dot. Enzo takes chips from a defenseless binome and tells Dot that she is nothing but trouble because she has no bar code. Enzo points out that the Security Drones seem very interested in Dot. She asks where Bob is and everyone laughs at her again. Enzo explains that she can find him with "Old Man Phong" on Level 31 and throws her out of the Diner into the garbage.

As Dot pulls herself up, a massive VidWindow appears in the sky with Megabyte on it. He tells the people of Baudway Sector that his power is upon them. Everyone bows by saying, "Hail to the prince of power" and the window vanishes.

Dot goes to find Phong, who is living in a cardboard box and has apparently gone insane. He shows Dot that Bob was nullified, and Phong keeps him as a pet in a small birdcage. Dot regrets her actions and says she'd save Mainframe if only she could have another chance. In a rare moment of clarity, Phong temporarily snaps back into sanity and says, "Chance has nothing to do with it, child. The future is not determined by a throw of the dice; it is determined by the conscious decisions of you and me." At first Dot doesn't understand and asks him what he said, but Phong regresses back into dementia and asks her if she wants to hear about his windshield collection.

Suddenly, Phong screams in fear and runs back into his box. A viral security team chases Dot down an alley and corner her. As they approach, a VidWindow opens with Lieutenant Cyrus in a viral uniform to supervise the troops. Dot realizes Cyrus was the traitor that took the PID file. A drone moves in, shaves her hair off, and stamps her forehead with a bar code. Dot looks into a mirror and screams.

Dot finds herself back within the Game. She realizes that everything she has just seen was a vision of things that may come to pass if she loses the game. Phong explains that she still has time. Her confidence renewed, Dot successfully gets into the final chamber and defeats the User.

Once out of the Game, Dot talks to Phong of what she saw. She then has a final vision: a sub-sector of G-Prime being changed into the Energy Park she was planning. Phong tells her, "What you are experiencing is a temporary distortion of reality. It is one of the side-effects of the process I put you through." He had used a Reality Distortion Engine to show her all those visions. She thanks him for showing her what he did.

Dot then realizes she still has time. She had forgotten that every entry in her organizer is encrypted. She knows that Megabyte has not yet broken the code because the border is still under guard. Dot and Bob race to Giedi Prime in their stolen ABC. She manages to hack into Megabyte's system using her own password and get the PIDs back before Megabyte can get his hands on them. Dot quickly sends them to the Principal Office and Phong inputs the PIDs. She then sends a message to Megabyte, telling him that she owes it all to Cyrus for coming up with the scheme. Enraged, Megabyte orders Hack and Slash to take Cyrus to the PID extraction chamber and demote him to shoeshiner. The sub-sector's citizens are freed and the sub-sector is reformatted in an Energy Park amid a flurry of fireworks to celebrate. 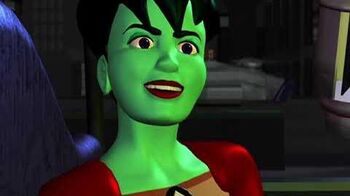