Bob and Enzo are in a Basic Combat Game Cube. Bob is relaxing by the river while Enzo is trying to defeat the User. Bob is trying to teach Enzo how to hold his own in a Game Cube. He wants Enzo to be prepared for anything in case he gets caught in a more dangerous Game. Bob tells him about a Game called The Funhouse, which is rumored to be virtually impossible, but while Enzo is familiar with the Game, he dismisses it as an urban legend.

The User is obviously a newbie; he has not even learned how to drive yet. A plane with Binky and Algernon in it appears. The duo try to take out the User, but end up blowing up their plane instead. Bob puts the User out of his misery and ends the Game by firing a rocket launcher at his tank.

Bob and Enzo head for Dot's Diner, where Dot is preparing for a big event she's about to head off to. Just before she is about to leave with Bob, she has a bizarre vision in which the entire interior of the Diner changes. All the binomes are suddenly viral and Cecil has a blank face. She hears Phong say, "What you are experiencing is a temporary distortion of reality". The vision clears and Dot leaves with Bob for sector 1000, a sub-sector of Giedi Prime which is under Megabyte's complete control in all aspects except for the PIDs of its inhabitants.

Once they arrive they are greeted by Cyrus, a binome who represents the sub-sector. Dot begins her speech, which turns out to be an attempt to free the citizens of this small sector from Megabyte's control. To do this she must have their PIDs so that Phong can register them online with the Principal Office. At the end of her speech, everyone is quiet, the Baby Binome's parents give their PIDs and everyone else follows. Dot collects the newly freed citizens' personal identification codes in her organizer. She declares the citizens free, but when she turns back to her podium, her organizer is gone. Cyrus hands it to her, telling her to be careful with it.

At that moment, Hack and Slash raid the auditorium, telling everyone to surrender. Dot, Bob, and Cyrus escape to the Utility Tunnels through a trap door in the floor of the stage. They are pursued by viral binomes. Bob and Dot manage to get away, but Cyrus is captured.

Dot and Bob make their escape in a stolen ABC, in which they make a dash for the border. They manage to get out of Giedi Prime. While they're on the way out, Dot has another strange vision similar to the first, and she stops to regroup.

While they are stopping, a VidWindow appears with Megabyte on it. The virus tells all of Giedi Prime that he is enslaving everyone there who is still free. He personally thanks his "dear friend" Dot Matrix for helping him. Dot checks her organizer and the file containing the PIDs was removed. She doesn't know how this could have happened and is completely disheartened. Bob is immediately worried about her depressed attitude.

In the Silicon Tor, Megabyte asks how long it will take to read the PID file. Herr Doktor tells him the file is encrypted and it will take at least 2,000 nanoseconds to decrypt the PIDs. Megabyte is pleased and turns to another binome. Megabyte thanks him for his underhanded service. The individual is Cyrus, telling him it was an honor to betray his comrades for him. Megabyte tells Cyrus that in for his service, he will be made a Lieutenant in his army.

A Game Cube drops on them and Bob and Dot are horrified to discover that they are standing directly in front of... The Funhouse. 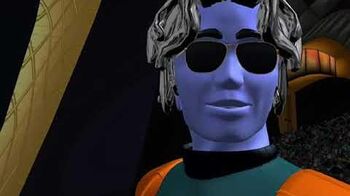