A beautiful view of space with an asteroid belt around a large planet. Suddenly an flying saucer appears out of nowhere and starts to talk in a strange 'Ack! Ack!' type language, with subtitles. The three aliens are AndrAIa, Enzo and Frisket and they are inside the Space Battles Game. They are being chased by a space shuttle which is firing upon them destroying asteroids around them. They can't seem to shake the User, and get ready to finish the Game. One of the martians asks the other whether they are staying in the Game or leaving with it dependent on the outcome. So they change from the Game Sprite back-ups by double clicking on them and they change to the regular icon. The green martian ('Enzo') has some form of targeting system built into his right eye, that twists and changes from a w to an M (for 'Matrix') He targets the Users shuttle blowing it's left wing off and it spins into a large asteroid. 'Game Over' says a strange voice, not the regular female System Voice they hear.

The Game Cube disappears into the clouds and good old Frisket, same as always sniffing the ground, he looks back, and sees several binomes hiding in an old battered transport. A deep voice says, 'Don't worry boy. I see them. This isn't Mainframe. It never is.' Enzo and AndrAIa are now fully grown. They look around the place and AndrAIa notes that this system, is the most devastated place they have ever come across. The binomes are still afraid and hiding, AndrAIa tells them it's alright and that they can come out. They do. They believe that AndrAIa and Matrix are Users. They explain that they are sprites. AndrAIa introduces the big guy with muscles as Enzo, but he simply says 'Matrix, call me Matrix.' A frightened binome steps back onto a horn and Matrix blasts the horn to pieces. The binome falls over backwards and the rest of the binomes scatter and hide. AndrAIa comments, 'Ya'know you really have to work on those social skills.' Matrix tells AndrAIa that he will go off and try and fix any repairs to the system, while AndrAIa goes off to find the 'command.com' Matrix tells Frisket not to eat anyone and the binomes duck behind junk. AndrAIa tries to calm down the scared binomes by telling them that Matrix and Frisket are pussycats once you get to know them.

Matrix discovers multiple tears using Glitch and then discovers that there is a virus close, so he runs towards it.

At the Damaged Systems Principal Office, AndrAIa discovers a binome named Wise One. He's all that's left of the command system. There are other frightened binomes around the office.

A large Praying Mantis Virus is attacking a small boyish sprite, who is trying to fight it with small rocks. Matrix fires at the virus destroying one of its mandibles. He jumps and lands on its neck, gun to head. It asks if Matrix is a guardian, but he denies it and claims that he's a renegade. It cries for mercy, but Matrix refuses and proceeds to delete it. The little sprite tells Matrix that he had the virus just where he wanted him and doesn't need any help, prompting Matrix to leave.

Back at the Principal Office, the wise binome is asking AndrAIa how they come from the Cubes. AndrAIa explains that to survive they become part of the Game. She explains what Game Hopping is and she clicks her icon, changing it back and forth from system sprite to Game sprite. She tells the binomes that Mainframe is Matrix's home, and her place is with him. Matrix appears and explains that this system will have had it if they lose one more game.

Later, the binomes are offering gifts to AndrAIa and Matrix to stay on and protect their system. AndrAIa tells them that they may be able to stay long enough to train up binomes to protect the system. The binomes whistle and ignore the comment. Matrix tells them that if they don't bother to volunteer that he's leaving with the next game. He storms off.

Behind the scenes, Matrix is playing with a Yoyo, AndrAIa approaches. Matrix asks how many volunteers they actually got four.

Matrix inspects them, he's not happy. One is Barry, and he says he's fast. One is Gabby and she wants to chronicle the adventures of the greatest hero this system has ever seen. Not Matrix, AndrAIa. The other introduces himself as Hardboot. The last if Jeff and he's not sure why he's here. Looking on is the sprite Matrix found earlier. Then a game starts to arrive. The sprite runs towards Matrix and jumps at him Enzo and Bob style. In this case Matrix stands tough while the sprite falls to the floor. The game starts.

In the Game, the sprite tells Matrix that they may need his help. Matrix tells the sprite that games are not for small sprites, to AndrAIa's snarky reminiscence. The game is 'Cron the Destroyer' They have to prevent the user from stealing the gold tooth of sysop in the castle of despair. They are scared. They're in a swamp. AndrAIa decides it time for the team speech. Matrix gives them new names, Barry is Overdrive, Gaby is Tweek, Hardboot is... Hardboot, Jeff is Tac Tic. The sprite asks what his name is. Matrix tells the sprite 'You are really starting to get my back up!' The sprite comments on 'Backup! Hey Cool' It's time to Reboot, AndrAIa explains that rebooting allows the sprites and binomes to download useful tools, code and skills from the game. They all Reboot. Matrix becomes a Scottish type warrior, and AndrAIa becomes an amazon like warrior. Gaby is wearing a similar warrior costume. The binomes get various other disguises. They walk towards the castle. Backup behind the group gets picked up be a giant bird and carried off without the group noticing. Tac Tic, dressed as a wizard looks behind, sees a feather and picks it up, putting it into his magic bag.

Tweek keeps writing about the adventures as they go. They come across a boat chained to the bank. Overdrive jumps onto the boat and starts hacking at the big chain with his very small axe. It attracts the attention of a large six eyed water creature which comes up behind Overdrive and is ready to eat him when AndrAIa sticks her extendable fingernails into the creatures neck and tames it. They all climb aboard and head towards the castle. Matrix asks where Backup is and decides to leave the group and find him.

Somewhere in the castle, Backup is hanging over a deep pit holding onto what is left of a grate and crying for help. Matrix picks up the grate and looks the poor sprite straight in the eyes. 'That was pixelacious!' says Backup, 'Yeah! Real Alphanumberic,' says Matrix. Backup liks 'alphanumeric'.

Back in the swamp the rest of the team are on the steps of the castle of despair. AndrAIa tells the binomes that Matrix and herself will be leaving with the Game, that they are the systems only hope.

Elsewhere outside the game a building collapses, one of the binomes shouts to the wise one that the system is crashing. He tells them to go into the Principal Office, where it is safe.

Inside the Game they have to get across a moat. Tac Tic brings the feather he found earlier out of his bag and says, 'If only I could fly'. Suddenly wings sprout from his back and he floats upwards towards the castle. He manages to drop the drawbridge. AndrAIa comments on a nice job. They enter.

Meanwhile, Matrix and Backup are fighting two winged creatures. Matrix hacks one of there heads off and they head towards the next level.

The rest of the team are now in the final room, they can't believe they have made it this far without coming across the user. They try to pry open the mouth of a large statue to get the tooth and the user appears dressed in a suit of armour. 'By Cron, I want the tooth,' says the user. 'You can't handle the tooth,' replies Backup. The binomes manage to overcome the user by throwing skulls at him and the tongue of the statue. AndrAIa and Matrix get ready to leave and double click their icons. Matrix throws Backup his yo-yo. He pulls the tooth and the System Voice says, "Game Over."

Matrix and AndrAIa walk off as the Game changes to purple energy, 'Have I told you lately how wonderful you are?' asks AndrAIa. 'Not lately'.

The Game Cube lifts off amid cheers for the new system heroes. Wise One wishes them luck and unrolls a System Repair Plan document. The sky turns blue for this system. 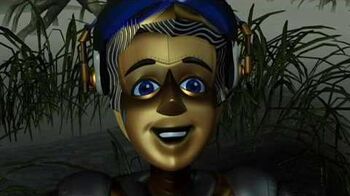