A menacing stranger appears atop the Sub-Sphere of the Principal Office. Bob is working on his his car in Kits Sector's Eight-Ball Apartments. Dot is with him, telling him he should have his car looked at by a professional. As Bob was about to retort, he looks alarmed, sensing something was wrong.

Phong is in the read-only room, looking over documents when a strange portal opens in front of him and an the strange creature emerges. He demands to see the Code Master Talon. This creature is himself a Code Master named Lens. Phong insists there is no one in Mainframe with that name, but Lens won't take no for an answer. When Phong tries to alert the system to the Code Master's presence, He puts the old sprite in a time lock.

Meanwhile, Enzo and Frisket are at Old Man Pearson's Data Dump. They are looking for parts for an air cart that Enzo is planning to build. Frisket, being a dog, is a little too curious for his own good and inadvertently knocks over a chest, out of which rolls a crystalline rod. Enzo picks it up, claiming it would make a great stabilizer for his air car. However, Mr. Pearson enters and scolds Enzo for meddling in other people's business. Before Enzo can reply the Code Master makes an announcement over the system Pinnacle Windows, declaring that he is seeking out the Code Master called Talon. Mr. Pearson looks terrified and starts shaking like a leaf.

Bob and Dot travel by Zip Board to the Principal Office where the Codemaster, Lens, is speaking. They exchange names and Bob suggests Lens is from the Web. This provokes a scared response from the audience but Lens says that he is from the Net. Bob gets Lens to release Phong, then tells him that there is no Talon in Mainframe. As thanks, Lens puts a powerful file-lock on Glitch, immobilizing the Key Tool. He also begins to destroy the system to smoke out Talon.

Dot, Bob, and Enzo go to the Principal Office, where Phong has Dot begin evacuating citizens. Bob goes with Phong to the Read-Only Room. After being told that the lock on Glitch can only be removed by the Code Master, Bob asks Phong about Code Masters. Phong tells Bob all he knows about them. That long ago a Codemaster did come to Mainframe seeking refuge, but that he has since changed his identity. He also mentions that the Code Master's weapon, the Gibson Coil Pike is deadly. Neither sprite is aware that Enzo is spying on their conversation. When Enzo hears about the Gibson Coil Pike, he remembers the crystalline rod at Old Man Pearson's and returns to the dump. Enzo harasses Old Man Pearson about the pike, certain that he is Talon and that he's going to confront Lens. Pearson says that Enzo shouldn't have anything to do with Gibson Coils and denies everything.

Bob knows that Lens is a threat to Mainframe, and has a plan to get rid of him for good. After a brief encounter with Lens, the Guardian offers him a deal; he knows that Code Masters are obsessed with power, and believe their own is supreme. So he tells Lens that he will show him a power even greater than a Code Master's. He plans to take him into a Game Cube and deliberately lose, to nullify the stranger.

A Game lands soon, it is a Wild West Game, the goal is to stop a runaway train before it reaches the final station. Bob asks if Lens will release the time-lock on Glitch. When Lens tries his pike will not function in the Game. They get close to the engine and Bob stops Lens. The User pulls a pin out of the train uncoupling the engine from the train. Bob prepares to be nullified, but hears a scream from he engine, its Enzo. He goes to the engine and defeats the User, ending the Game. He then proceeds to chew Enzo out for entering a Game alone. If Bob hadn't realized Enzo was in the Game and had succeeded in his original goal, Enzo would have been nullified along with Bob and the Code Master.

When the Game leaves, Old Man Pearson is standing in front of the Dot's Diner, prepared to confront Lens. He identifies himself as Talon. Instead of accepting Lens's challenge, he breaks his Gibson Coil in two. Lens, enraged, transforms, becoming enormous. He prepares himself to crush Pearson, but is unable to do so when Bob gets in the way. Bob is soon joined by Dot and Enzo. The Code Master is overwhelmed by such a display of honour. He agrees to tell the guild that Talon is no more, removes the lock on Glitch, and leaves Mainframe. In the aftermath, Old Man Pearson becomes annoyed with the sentimentality the others try to shower him with tells them to leave him alone. 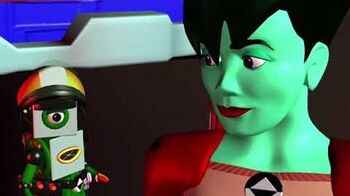