In Kits Sector, cleanup efforts are in full swing, and the Giant Robot is carried away while knocking over a couple buildings. A binome named Jimmy informs Dot that cleanup is nearly complete and that all the nulls have left. Bob is talking to Phong about Hexadecimal, explaining he wants to take her back to Lost Angles. Bob deduces that what attacked her may prey on viruses, which means he thinks Megabyte may have been infected. The virus in question is literally standing directly behind Bob at this point. The virus flings Bob aside and tries to merge with Hex. Bob calls Phong and tells him what is going on. Bob hopes to get Hex to safety but Megabyte is making a run for it, trying to reach Hex in time.

Just as Megabyte is about to reach Hex and Bob, Dot comes along with a construction vehicle, which she uses to transport Megabyte away from Hex and Bob. She drops him before he can infect the transport vehicle.

Bob and Hexadecimal are in Bob's car, heading for Lost Angles. Hex reveals that Megabyte is her brother: they come from the same viral strain, and their attempts to destroy each other is only sibling rivalry. If they merge, they will create the next generation of virus. Bob gets a message from Dot warning him that Megabyte has escaped - but it's too late. The virus has already caught up with Bob and Hex. He grabs his sister and jumps down to the ground, where the two viruses merge and become a single, very large virus.

Bob tells Phong he's going to try to talk to the new virus, in case the transformation created a benign virus. He does so, but the virus is anything but benign. He introduces himself as Gigabyte, destroyer of systems. Bob attacks him with an energy beam, but Gigabyte absorbs it. Gigabyte gets a good swipe at Bob, severely damaging his armour. Bob high-tails it out of there on his zip board, sending a Net-wide alert calling for help as he flees. He also tells Phong to power down the city so Gigabyte can't get any energy to power up with: the transformation has left him relatively weak.

Just as Bob finishes his message he sees Dot attempting to go after Gigabyte in a small CPU fighter. She fires her energy guns. They have no effect except for making the class 5 virus stronger. Dot gets sideswiped and her vehicle crashes. Bob gets her out of the vehicle before Gigabyte can get to her and they flee to relative safety.

The system has begun to power down and Bob and Dot have not gotten far. They land in an alley - a dead end. Gigabyte approaches from the only exit, intent on taking their lives. Bob and Dot share a meaningful moment and Bob sends Glitch away before Gigabyte raises his claws to attack - and his arm gets severed from his torso, by none other than Mouse.

Mouse flies Bob and Dot to the Principal Office - where not-so-friendly words are exchanged by Dot and Mouse in transit - and Mouse hacks into the Principal Office shield to get access to the building. Within, the sprites form a plan to get rid of Gigabyte. Bob lures Gigabyte to Floating Point Park, then detached it from the mainland, stranding him. Hack and Slash show up just before they detach the sector and help the outmatched Bob. Meanwhile, Dot and Mouse go out in Mouse's Ship to rope a tear in the energy sea. Things are tense but quickly their plan comes together as the tear is roped. Dot saved Mouse from certain deletion as an unexpected flare from the tear pushed Mouse off her platform.

Meanwhile, on the detached Floating Point Park, Gigabyte drains Hack of energy. Slash is so angry he punches Gigabyte as hard as he can - sending him flying back toward the city. Bob warns Phong, who sets up a trap while he waits for Dot and Mouse to return. Bob has Slash fly him back to Mainframe. They surprise him with the tear and Gigabyte feeds off it, boasting in the incredible power he now has. Bob revealed that he can use the power as well and had Glitch stabilize the tear, then split the portal, separating Gigabyte into Megabyte and Hexadecimal. Bob is confused; however, when he saw three entities depart instead of two. What was the third portal? But no one else, other than Phong, seems to have seen the third portal.

Despite the fact that the day has been won, Bob suspects that something is still wrong. After he said this, Mouse touched a small device on her wristband. It started to beep quietly and flash red. 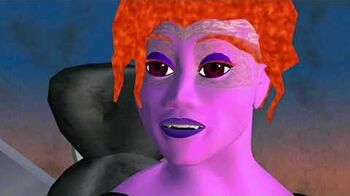