Within Giedi Prime Sector hundreds of ABCs start lining to exit the sector. Megabyte arrives on his new bike and tells Hexadecimal, still caged in her stasis chamber, 'When you are ready, dear sister.' 'Ready for what?' Megabyte orders Hex to use her viral powers to breach the firewall. Megabyte uses the collar to make her do what she's told. Hexadecimal laughs it off thinking to herself what she will do to Megabyte when she is free of the collar. She explains that he doesn't have any idea how much power he is trying to control. Chaos will always win over order. Megabyte tells her to follow his instructions or suffer. Hexadecimal finally raises her arms and easily opens a hole in the firewall.

Within the Principal Office, Dot, Enzo, AndrAIa, Phong, Mouse, and Specky are examining the city display table when motion sensors for G Prime just went off the scale, they discover the buildup of forces at the firewall. Dot orders the group to defense mode 9704, she needs to know where the breach will happen.

A small exit point opens but Megabyte knows it could easily become a bottle neck. He orders Lieutenant Chauncy to launch an all out attack on the Principal Office once they are clear of the breach. 'Take no prisoners, show no mercy.' A mass of forces go through the shield and back into the main sectors of Mainframe heading for the Principal Office.

Inside Dot is hanging on for the last moment to see if Megabyte will come through, everyone on the Principal Office is awaiting her order to launch a counterattack. Enzo tells Dot that they have to activate the defenses, now. She tells Mouse to hit 'em hard. Mouse orders the CPU officers to deploy all smart cannons and let 'em rip. Outside the office the binomes are readying all weapons and then they start to fire, destroying most of the advancing forces.

Megabyte orders Hexadecimal to close the rift. Lieutenant Chauncy orders all remaining viral forces to return to the rift, but it is already closing and they are destroyed. Even Chauncy, the leader of Megabyte's army, is deleted.

While all around the war room are celebrating Dot disappears into her office quietly. After moments, Phong enters the office and finds Dot crying. She makes up some excuse about checking reports, and explains that although she should be celebrating she feels empty, as if part of her died with the virals. She wants to know how many more must suffer before Megabyte is stopped. Phong tells Dot she must be strong for Bobs sake, and they must act to show Bob a way home from the Web. She recovers and decides she should be celebrating with her staff and leaves the office.

Back in the medical facility where Hexadecimal is being held, Megabyte asks Herr Doktor how long he can keep Hex under his control. The good doctor doesn't know, he even thinks that Hex may even be enjoying it. 'Don't mention insanity, it frightens the workforce.' Megabyte asks the timeline for their own Firewall Disruptor. Herr Doktor tells him it is being built on schedule. Megabyte tells Herr Doktor to remind him that when they breach the firewall again he is to make Hack and Slash to take point position as he is tired of them.

Somewhere deep in a smelting factory, Cyrus is hanging from chains while Hack and Slash argue over who should push the button to squash Cyrus under a large crushing machine. 'Whenever I push a button, something horrible happens.' They eventually decide that because one of them pushed the last button the other should push it. They press the button send Cyrus into the flattening machine, but Slash pulls Cyrus to safety just before he is crushed, saying 'I cannot do this. It is bad.... I miss Bob.' He reckons that Bob is the only one that actually stops them from doing anything really bad. Cyrus is freed.

In the Principal Office they get an alarm from the long range sensors which Mouse has recently fitted indicate an incoming game. They scan for landing coordinates. Dot tells Enzo that he is the only thing she has left and that he should be careful. They clear the sector and Enzo, AndrAIa and Frisket are on their own.

Back at Silicon Tor Megabyte watches as a precession escorts Enzo in Bob's Car to the game. Megabyte considers Enzo the young pretender. 'Have your fun boy, while you can.'

Outside the crowds have gathered to see Enzo and AndrAIa into the Game. A small binome points out Enzo and says to his mommy that Enzo's their guardian.

Cyrus is still trying to escape out of the sector, but he is blocked by the firewall. While looking for a way out, he notices Scuzzy on the other side of the firewall, who is searching for Hexadecimal. Cyrus says maybe they can help each other out.

In the Game, Enzo, Frisket and AndrAIa are standing in a massive stained glass windowed arena, floating in the sky. Enzo asks Glitch for the Game stats; it is a combat Game between gods, mortals, and demons. Around the edge of the arena the Game begins to load the players, all stained glass representations of warriors. There are twelve opponents and the User only has to beat five of them to win the Game. If either AndrAIa or Enzo reboot into the wrong characters, they may never get chosen.

At the Principal Office, Dot is worried and asks Phong if the game is nearly over, but the game has only just barely begun. Phong tells her she must be patient.

In the Game, the User chooses his character: a horned red demon with fiery wings named Zaytan. Enzo tells AndrAIa to take Frisket to one of the characters and reboot, while Enzo hangs around to try and reboot into one of the characters just before it gets chosen. Enzo doesn't believe in the 'no win scenario.' AndrAIa and Frisket reboot into a large dog and a four-armed god, and are encased in a stained glass chamber until they are chosen. The User picks an opponent, a white-winged angel. Enzo makes a run for it, but misses rebooting. In round one, the user wins. Round two, and the same thing happens, but this time, he demonstrates his finishing move, which involves grabbing the opponents head and crushing it. Enzo takes note of the finishing move and gets ready.

In Hexadecimal's cell, a panel bangs. She says, "Come in". Scuzzy opens the panel and enters the room. He has somehow found a way past the Firewall. Hexadecimal has been expecting him and impatiently asks where he's been, he shows her the firewall, and she says, "You call that an excuse?!"

Back in the Game, the User is fighting a green commando style warrior, round one is just complete. The user wins again, Round two, the opponent is hit with several energy bolts and falls. The user demonstrates his finishing move, again. The scenery changes and it's the final level, Enzo only just gets chosen, and reboots into a yellow ninja. Enzo can't talk with the mask on, so he pulls it off. Enzo fights and wins the first round, then loses the second. Round three, he has to do this one; otherwise, the User wins. After a valiant attempt at trying to beat the User, Enzo is hit in the face, destroying his right eye. Frisket and AndrAIa can do nothing to help. Two more hits and Enzo is down. Realizing he cannot win, he activates his icon, changing it to a yellow triangle like AndrAIa's Game Sprite back-up. As the User begins his finishing move on Enzo, AndrAIa tearfully changes Frisket's and her own icon into game mode.

Outside the Game is complete, and Dot orders medical teams in. As the Game Cube lifts off, they see the sector nullified, and they hear the System Voice announce: "Game Over. User wins." Shocked, everyone believes that Enzo has been nullified, and Dot breaks down in tears. Meanwhile, over in Silicon Tor, Megabyte laughs. 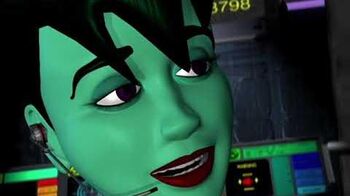