Inside a Game Cube the Santa Claus User is skiing down a snowy mountain, sack in hand. He passes a couple of snowmen standing watching beneath a snowy outcrop as Santa passes. One of the snowmen launches a snowball at Santa, who is constantly saying 'Ho! Ho! Ho!' as usual. Santa is hit square in the face by the projectile. The snowmen continue their pursuit as one of them announces, 'Cut him off AndrAIa'. AndrAIa jumps over an arch with stockings hanging from it as Santa and Enzo pass through. They are swiftly approaching a cliff edge. Below the cliff is a quaint little snowy cottage. Enzo overtakes Santa travelling on his icicle and changes into an ice ramp, as the jolly fat fellow heads towards the edge. He looks stunned as he head over the ramp and into fresh air travelling dangerously towards the ground, he kicks off his skis, pulls a cord and a giant inflatable bauble opens up allowing the red suited guy to float gently towards the ground. Enzo scuppers his plans by launching an icicle which hits the bauble and bursts causing the User to fall to a snowy death, ending the Game.

A James Bond style opening sequence begins with the song 'Firewall' as the main characters float past the screen.

AndrAIa and Enzo celebrate their success and note what a stupid looking User, 'Ho! Ho! Ho! What sort of a catch phrase is that?' There is no recovery team to pick them up, but Megabyte is there telling Enzo to deliver a message. Megabyte picks Enzo up by the throat and throws him to the ground, 'Now listen carefully, Boy!'

Back at the Principal Office, the shield is up protecting its occupants but AndrAIa is explaining to the gathered crowd that Megabyte is going to make the rest of Mainframe suffer a lot. Enzo is downhearted, after his run in with Megabyte he is starting to believe that he's no Guardian, and that he's only a delivery boy. AndrAIa points out that Megabyte could have deleted them both, she understands what propanganda is and they must fight. Enzo thinks its useless with the ABC's surrounding the building. All seems lost. 'I'm only glad that Bob hasn't seen this,' Mouse is trying to build up Enzo courage, it works, Bob wouldn't have stayed in the Principal Office, a guardian would find a way to lock Megabyte up. An inverted firewall could work. Phong and Mouse have put a plan in Enzos mouth, and bolstered him up.

Meanwhile, Hexadecimal is held in her stasis chamber by Megabyte at the medical facility. She is feeling weak, so Megabyte gives her a little shock to her collar. She screams that she will tear him to pieces when she is free of the infernal collar. Megabyte ignores her threat and orders the chamber be readied for transport and Hex is lifted away laughing.

Dot, Phong, and Mouse exit a lift into an large laboratory where the Tech Boys work. At the far end Mouse's Ship sits docked. They are testing many items including laser proof vests, ejection seats, exploding toilets.

They are greeted by Hue Branch, who explains a device called a Sender which redirects energy from one source to another. They plan to redirect the Principal Office shield energy to surround Giedi Prime Sector. Then there is the signal for an incoming Game Cube.

Inside the Game the landscape is a young childs bedroom, toys scattered around, a nice comfy bedspread. AndrAIa and Enzo are as small as toys. The User only has to exit this room to win. But what is to stop him? A toy snake rears up behind the two sprites. They duck as it passes. They are then greeted by a mob lead by Cyrus on his propaganda trail. They claim Enzo's only a kid, he's not Guardian. Even a Baby Binome tosses a blue teddy at poor Enzo.

Mouse's ship is being loaded with equipment and goodies including the senders. Dot warns Mouse to be careful, but Mouse assures Dot that the virals won't catch her.

Back in the Game, Frisket appears. As a pink User mobile heads towards the group separating them. The Game is on. AndrAIa and Enzo know Cyrus is working for Megabyte. Time to Reboot. AndrAIa gets another motorcycle and Enzo gets a Bond style tux. They tell Cyrus to Reboot, but he has never done it before, 'Beetroot!... erm, Reboot!' Cyrus gets stuck in a Dick Dastardly car with Frisket along for the ride.

Mouse flys out of the shield and sits back for the ride as her ship starts launching the senders around the sector.

The race is on, dodging various items from darts balloons, a solid line of cop cars and wooden dinosaurs skeleton. A line AndrAIa jumps the traffic using the dinosaurs back as a ramp. The dino wrecks Cyrus's car tearing the tyre, and having a good chew. Cyrus cries for help.

Back at the Principal Office, Hue Branch is excited to actually use his equipement under real field conditions. Phong and Dot ask what he means. Hue explains that all of this is theory, but should work. Phong excitedly explains that if this doesn't work the shield energy will still be transmitted to the senders weather they work or not, and the Principal Office will be defenceless. Hue just says 'Lets hope it works'

As the dino is chewing, Enzo distracts it, as Frisket grabs the tail and Enzo picks up Cyrus. The User has now got herself a pink jet, while AndrAIa is being chased by a Red Angle-poise lamp. Enzo tells Cyrus that they need his help. Frisket has frightened the dinosaur and is running after it.

Outside Megabyte is preparing his troops and Hex for an attack.

As the User prepares to take off, with Cyrus at the controls of the car, Enzo jumps onto the wing via the ejector seat. Cyrus breaks in time to see a gyrocopter. On the wing Enzo has lost his gun which has somehow been replaced by the blue teddybear the baby threw at Enzo. He jams it in the flaps. Knocking Enzo off the plane towards the ground, past an Indian standing on a cupboard. He is miraculously picked up by Cyrus in the gyrocopter. As the plane crashes into a dart board. With screams of 'Heyelp! Heyelp!'. Game Over.

AndrAIa and Enzo are back and the binomes confidence in Enzo has returned. Enzo tells Cyrus he is a hero. Megabyte turns up and demands that he is taken away. But Frisket protects him. Mouse's Ship appears overhead dropping senders between Enzo's group and Megabyte's troops. Dot requests Enzo's command to activate the firewall. Enzo tells Glitch 'Firewall'. The power is transmitted to the senders and each one fires red energy into the air. The energy from the senders starts joining together as Hack and Slash grab Cyrus and bring him to their side. The energy from the senders connects and forms a solid red wall encasing Megabyte and Hexadecimal in Giedi Prime. Hexadecimal laughs as Megabyte is now trapped saying, "Now it is the jailer that is jailed," while Megabyte shakes with fury. The binomes then congratulate Enzo for saving them. 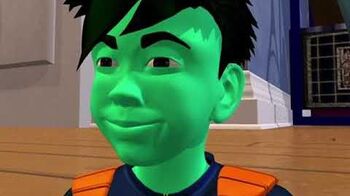