Although the devastation has been halted, the city of Mainframe is in sad shape. At the Principal Office, Binomes are breaking out glow-sticks for light, the med-bay is filled with Binomes torn to pieces, and the lines at the porta-potties are too long. Some are predicting the city's doom.

Phong tells the others that Mainframe is dying. They have stopped the bleeding but the patient is too far gone to save. Dot insists that there must be something they can do. The city leader tells her they would simply be wasting their time. The sectors cannot be repaired without power, but if they power the sectors up they'll start collapsing again.

Bob knows of one solution, but it is a last resort: a Game Cube. Losing a Game could push Mainframe over the edge, leading to a crash. Matrix does not want to risk it, but Bob argues that a crash could force the User to perform a restart. While they are discussing this, the System Voice announces an incoming Game Cube. Bob keeps everyone from leaving, and the Cube lands, with no one inside to defeat it.

Phong suddenly springs to action at the keyboard, stating that they don't have much time. Dot agrees, every single PID in the system has to be accounted for.

Ray Tracer does some low-key flirting with Mouse, who indicates that she plans to stick around. He agrees that "right here" is a good place to be.

After a great deal of work, Phong announces that all active PIDs have been scanned, all they can do now is wait. Hexadecimal appears asking what are they waiting for. She has brought biscuits, gingerbread cookies in the shape of Herr Doktor and Bunnyfoot. Bob begs Phong to give Hexadecimal an icon. He eventually agrees but does not believe that he is going along with this, assigning a PID to the virus. The Game suddenly announces its end...

and the User wins.

The Game Cube leaves and the sky turns black. The System Voice announces: "Warning: System Crash". The remaining buildings fall down, pipes burst, total damage. Old Man Pearson, Mr. Mitchell, Binky, Algernon, and the pirates share one last drink. Hack and Slash are falling to pieces, Floating Point Park tumbles to the sea. When the towers of Wall Street sink into the ocean, Specky takes comfort in being near the towering hulk of Princess Bula. Mouse gets impatient with the Surfer and brings him into a dip long, slow kiss. The sign from Dot's Diner sinks. The voice continues to say "Warning: System Crash", becoming more and more warbly. The Principal Office goes dark and is the only building that remains above the sea. Everyone looks down, Phong is visibly taking the city's demise hard. The last thing we see is Bob and Dot gazing at each other.

On a dark computer screen, a green message appears:

Some typing can be heard:

With a bang and a whir, dim lights start up and the damaged Principal Office can be seen. The System Voice announces "Warning: Incoming Data." Fireworks appear in the sky, and a bright yellow virtual Principal Office comes down and overlays the damaged one. As a wave from the Energy Sea hits it the overlay renews the Principal Office. The entire building shines brand new. The six individual sectors start coming down. Kits Sector, Baudway Sector, Giedi Prime, Wall Street, Beverly Hills, Floating Point Park. The sea comes in from all sides, and bursts up through the center of the Principal Office like a fountain, causing the sky to ripple with yellow energy. The transparent golden outline of buildings solidify. The financial institutions on Wall Street, the highway and main skyscrapers in Baudway, Eight-Ball Apartments in Kits Sector, The Silicon Tor in G Prime. A new Sub-Sphere comes up from the Principal Office. Bits resume flowing on the aerial tramway, lights go on in buildings throughout the city, including the sign above Dot's Diner. VidWindow billboards pop up in Baudway, and the sky turns a beautiful blue as the city is complete.

"Thank the User, we are saved!" exclaims Phong. Suddenly many deleted binomes are restored. A Jean-Luc binome is restored, as are several deleted viral binomes. Everyone who had fallen into the sea is back. Then the viral binomes are de-infected by a viral scan, several had been policemen in the cities CPU forces. Lieutenant Chauncy exclaims "Great Norton's Ghost!". The rest of Giedi Prime is de-infected as the Silicon Tor is erased by the scan.

The viral scan plays over Hexadecimal's body, but she merely says "ooh, that tickled".

Princess Bula tosses Specky up, playfully. The Baby Binome and his parents marvel at the bright lights as the city comes back to life. Mouse and the Surfer are still kissing. Matrix twirls AndrAIa, and Bob and Dot finally get their chance to kiss, as Phong takes pictures of everyone.

Bob promises to never leave again, but this moment of seriousness is shattered by Little Enzo racing out. The kid flattens Bob and starts talking a mile a minute. Everyone looks at Matrix, who still has his icon in Game Sprite mode. He had been backed up as a Game Sprite and the system thought it had to restore Enzo from an old PID file. Little Enzo gets the last line of the episode, he looks at Matrix and asks "Who's the big ugly green guy?"

Mike the TV comes on. For those viewers out there who missed ReBoot Season 3 and have no idea what's going on, we present, for your appreciation, this cycle only, the marvelous, magnificent, Mainframe Strolling Players.

Inside the Algorithm Theatre, everyone is being seated. There is a huge audience of binomes and sprites in attendance. The orchestra is warming up, the conductor has wild scraggly hair. The players who did the "True Stories of Mainframe" in AndrAIa (episode) are doing a recap of all of Season III.

The rest of the episode consists of their performance reenacting the events between Web World Wars and End Prog.

Here is the complete song they performed.

"EVERYTHING IS ALPHANUMERIC" performed by the Mainframe Strolling Players

[Binome playing Dot from start of season] The Web invaded Mainframe Sprite and virus battled side by side. Attempting to reclaim the city From the rift which opened wide. But Megabyte betrayed Bob and He threw him deep inside the pit. The pit was closed and Bob was hosed and all that he could say was ... [Binome playing Bob] NO!

[Binome playing Mouse] Without Bob to protect us we thought we would have no barrier, From he who would infect us, except Enzo, which was scarier.

[Binome playing Dot] The city shivered terrified from fear of the Infector's touch.

[Binome playing young Enzo as guardian] I guess your fear was verified, I wasn't a protector much.

[Binome playing Mouse] It wasn't Enzo's fault at first, he only was a little Sprite.

[Binome playing Phong] At best he was the worst but then he slowly learned to do it right.

[Binome playing Dot] And just as he was getting skilled a Game came down he couldn't win. I thought for sure they'd both been killed, first Bob, then Enzo. Not again!

[Chorus] And just as he was getting skilled, a Game came down he couldn't win. She thought for sure they'd both been killed first Bob, then Enzo. Not again!

[Binome playing grown-up Enzo Matrix] I went from Game to Game, I aged, I grew and lost my innocence. I soon became enraged by each and every bad experience. The Sprite you knew was gone, I had become a grim aggressor man. I knew from that point on that I was truly Bob's successor man.

[Chorus] The Sprite we knew was gone, he had become a grim aggressor man. He knew from that point on that he was truly Bob's successor man.

[Bob in Glitch costume] I met up with the Webriders and took the form of Interface.

[Binome playing Matrix] I joined my gun with pirate swords and sailed the seas of cyberspace.

[Binomes as Matrix and Bob] And when at last the pair of us were finally reunited guys, Our shouts of joy did blare because we really were delighted guys.

[Binome as Bob] We soon made tracks to Mainframe so our friends could reunite with us. We made it back and Megabyte was waiting there to fight with us.

[Binome playing Hex] Bob helped to de-fragment my head, while Matrix fought with Megabyte. I thought he'd wind up dead, but Matrix put up a terrific fight.

[Binome playing Matrix] I'd dreamed of this each lonely night, of doing in that virus trash. But just as I had won the fight, he engineered a system crash!

[Chorus] You dreamed of this each lonely night, of doing in that virus trash. But just as you had won the fight, he engineered a system crash!

[Binome playing Bob] What Megabyte had hoped to do was cause his death to crack us up. I gambled on the User to reboot and thereby back us up. It worked! We all were born anew and rid of things barbaric. Now we're back together, everything is Alphanumeric! 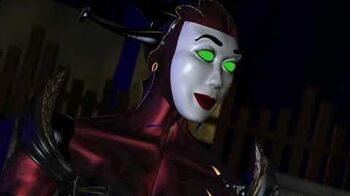