A flashback to when Mainframe's Twin City was still intact, a late-teenaged Dot oversee the construction of Dot's Diner. A younger Enzo, with a shirt stating "IAM 00" and a puppy Frisket, desperately reminded Dot they will be late for their father's experiment. Dot finally realizes how late she's running and yells to Jimmy to take over the construction and turns to leave. Suddenly, a bright light rises from the Twin City. The light shrinks down into the Twin Cities Principal Office and the building explodes, destroying the entire city. The shockwaves hit Mainframe... Dot suddenly wakes up from her nightmare.

Mainframe is engaged in a guerrilla war against Daemon and the infected Guardians. Ray Tracer and Captain Capacitor are marked as Missing In Action, and Daemon's infection is growing.

Bob flies toward the Principal Office as the Sub-Sphere opens to reveal the portal generator. Phong releases a tear and Bob stabilizes it into a portal for two nanos to allow Matrix and AndrAIa to return to the System.

Out in the Net, Matrix, and AndrAIa riding two combat bikes and being chased by Guardian warships. When the portal to Mainframe opens they rush through, but are followed by three Guardian ships. They immediately go to the Kits Sector port to open Mainframe to the Net. The CPU anti-aircraft guns try to keep them away and Matrix downs two ships. The third is shot down and the Guardian Soldiers who survived the crash. They overpower the CPU guards and take control of the port Control Tower. Mainframe is put online with the Net and the Tower is destroyed. A vast Guardian Armada advances into Mainframe. Dot orders all long-range guns to "target four point zero one... prepare for viral attack", before turning to Mouse for help.

Bob has a hard time accepting that the enemy is the Guardians. He is adamantly opposed to deleting them, believing they can just be driven back and the System sealed again; Matrix is just as adamant about protecting Mainframe first and foremost. Bob flies out to meet the Armada, getting himself in the way of the CPU guns; Dot is forced to order the CPU fleet to take the fight to them. The Armada leader turns out to be Bob's roommate from Academy, Cardon, who urges Bob to join with them in hearing the Word, "and the Word is Daemon".

Matrix says he's heard enough, and unleashes a fearsome barrage of missiles from his bike, starting off the battle. To Bob's horror, the system voice announces an incoming Game Cube. Mike the TV covers the battle live from the ground. Bob contains Guardian ships in force fields to Dot's frustration. Then he orders Matrix to stop what he's doing and battle the Game with AndrAIa, annoying Matrix. Bob explains that they can't afford to lose a sector to the Game now.

In the Super Computer, Daemon is informed by her servant Daecon that Mainframe is resisting the Word. Daemon is confused as to why, when the Word is inevitable. She also learns they have finally found Guardian 452, Bob, the last uninfected Guardian and the last one with a Key Tool and the power to open portals. He has merged with his Key tool and they are inseparable, making him a perfect "messenger" for the Word. She orders him brought to her.

Inside the Game, they find out it is a Spy Mission Game. Matrix vents his anger at Bob sending him there to get him out of the way, saying he's not a kid anymore. Little Enzo and Frisket have sneaked into the Game having thought no one else was available. Annoying Matrix further, especially when Enzo reboots into a bald, green dwarf in white clothes, making him a viable target for the User. AndrAIa acts diplomatically and tells Enzo to stay here with Matrix while she gets the User, presenting it as him being the last line of defense. Embarrassed by his younger self's cry of "alphanumeric!" and still annoyed, Matrix angrily declares the two of them are not the same and reboots into a larger version of Enzo's Game character. AndrAIa reboots into a suit with a silver halter top and purple hair.

Back at the battle, Bob fades a bit after each burst of energy expended. Exhausted, he falls from the sky and is saved by Hexadecimal. She carries him to the park outside his apartment in Kits Sector, heavily flirting with him and telling him he needs to relax. Mike tries to interview Bob, at which point Daemon's Zoom Room swoops down and carries Bob away. Hex says "how rude", and teleports Bob back, but as a joke did it by switching Mike with Bob.

Daemon is surprised to see Mike arrive, and Mike initially believes he's been deleted and gone to the afterlife before finding out he's in the Super Computer. He looks around and babbles in terror at the Guardian Sentries. Daemon says, "Hello little one." Mike finally realizes he's talking to Daemon. He asks her "Where are the talons and teeth and spiky things? You're a little small for a Super Virus, aren't you?" in confusion at her appearance. Daemon giggles and steps down. As soon as her foot touches the floor at Mike's level, he is immediately infected and turns into a televangelist. Daemon, calling him Michel, gets him to tell her all about Bob.

Back at Kits Sector, Hex is massaging the knots out of Bob's shoulders. "You need some down time. We could go down together..." Bob can't relax as long as Mainframe is in danger and Hexadecimal decides to make him feel better by getting rid of the Guardian Armada. Bob stresses to her to not delete them in the process. Matrix finally wins the Game and the Cube leaves, as it does, Hex unleashes a massive energy burst that conglomerates all the enemy ships into a red glowing ball. She tosses them out of the System saying "Go - away!", while Mouse uses her Ship to place firewall senders around the hole in Mainframe's sky, closing them off from the Net.

Mike is regaling Daemon with stories about Bob, Hexadecimal, himself, and any number of useless products for only "$99.99.99!". He is interrupted when 'My Lady' is informed by Daecon that Mainframe has forced their Armada back into the Net and resealed their system. Daemon is surprised that Bob is this powerful. Daecon tells her it wasn't their Guardian, but that the system is being assisted by a powerful virus. Mike tells them "That'll be Hexadecimal. She's mad." Daemon asks if Mike knows the virus, and he tells her, "Know her! I used to live with her. Course, not in the Biblical sense, mind you..."

Bob is looking much better after getting refueled with energy. A triumphant Hexadecimal asks for a kiss on the cheek but grabs him into a passionate embrace. Appearing in a VidWindow, Dot is taken aghast at the sight, and Bob cancels the call while he tries to get away from Hex. Suddenly and without warning, her icon starts glowing and begins changing her, and as she panics a swarm of nulls covers her. It starts to make her glow white, but then she is completely covered in Nulls.

Back in the Principal Office, everyone seems to be expecting a second Nullzilla. Little Enzo asks what a Nullzilla is and Phong gives him a ReBoot DVD to watch. Matrix and Bob clash over Hexadecimal being given a PID. Matrix shows no compassion for the virus arguing that they hadn't even needed her help until Bob sent him and AndrAIa into the Game. The argument is disrupted when everyone notices Hack and Slash are at the scene chasing after the null Nibbles. Bob is surprised they still look after it, though Dot thinks they're just covering their ASCIIs in case Megabyte returns.

Nibbles escapes and joins the blob of other Nulls. It forms a mouth, which mournfully cries out in the voice of Dot's father, "I live... Daughter." 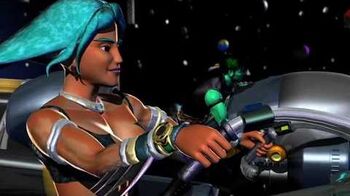