Mainframe's leaders are located in the War Room at the Principal Office. They are watching a video of the wedding. They watch as Megabyte lifts Specky and copies his form, dropping the defenseless binome to the ground. It confirms Megabyte has trojan horse viral abilities. Turbo is on another VidWindow offering to send a viral incident team from the Super Computer. Bob tells him to keep his executioners where they are. Turbo doesn't care to rehabilitate Megabyte like Bob does, but Bob argues that if they had deleted Hexadecimal the entire Net would have been destroyed by Daemon. He turns off Turbo's VidWindow saying they'll call if they need him.

Bob theorizes why Megabyte could have survived the Web. When he crushed Glitch there must had been a momentary exchange of code between the Key Tool and the virus. When Megabyte was forced into the Web, he had some guardian code to protect him. After he gained his new trojan horse abilities he used the code to look like Bob. Suddenly Specky alerts them to a situation outside.

A group of neo-viral binomes are trying to get pass the CPUs into the Principal Office. They are lead by Chauncy, Herr Doktor and Bunnyfoot. They're holding signs saying "THE VIRAL SKULL IS CALLING YOU!" and "BRING BACK MEGABYTE!". A CPU car quickly runs them off the Principal Office bridge and some binomes accidentally step on Herr Doktor's digits.

VidWindows appear around the Principal Office with Mike the TV announcing Megabyte's return to the entire city. He tells them all to panic and trust no one for he could be any of them. Bob determines that it is actually Megabyte disguised trying to create chaos and panic.

Matrix and Bob go out to find Dot. Phong opens VidWindows around the Principal Office to make a system wide announcement. "Due to some... circumstances, we are advising citizens to return to their homes, filelock doors and windows, and remain there until further notice. We apologize for any inconvenience but assure you that normal status will be resumed as soon as possible. There is no cause for alarm. Well, maybe a small cause for alarm. Just make sure you stay in pairs at all times and do not walk the city alone. Oh, and, uh, before I forget, here is an artist's impression of Megabyte's new form". The image on the VidWindows shifts to show a terrifying picture of Megabyte, claws out. The sounds of general panic are heard. "Please report any sightings of Megabyte to the authorities".

Matrix and Bob find Dot at Floating Point Park with Mouse, Hack and Slash. Mouse is trying to cheer Dot up about her failed wedding. When Bob gets there, Dot is worried that it may be Megabyte in disguise again. Hack and Slash fly away terrified that it may be their former master. Bob convinces Dot to work with him to catch Megabyte.

At Al's Wait & Eat cafe, Herr Doktor and the rest of the neo-virals are brooding over their failed storm on the Principal Office. Mike comes up and starts making fun of them. When one of the former viral guards threatens him Mike turns into Megabyte. He orders them to surrender their PIDs showing that if they resist they will pay the price. He shoots tendrils out of his hands and hits Al's Waiter forcibly sucking out his PID. They all immediately offer up their icons.

The doors of a CPU hangar open. Two large tanks and a set of flying cars lift off, escorting a vehicle with the Gateway Command mounted in its top. They fly out of the Principal Office. Bob and Matrix are sitting in a pair of cockpit chairs. After they clear the hangar and fly towards the Archives several viral ABCs attack the escorts. Some are destroyed the rest are damaged and crash. Two viral binomes break into the vehicle with the Gateway and find it's empty, being flown by remote. The viral ABCs tow the Gateway Command away from the Principal Office.

Phong is curious where Megabyte got his ABCs, Mouse comments it didn't take the virus long to build an army again. Phong mentions it's just how Dot surmised and Mouse says that now Megabyte has the Gateway Command. Dot smiles and asks, "Don't'cha love it when a plan comes together?"

Down in the lower areas of Level 31, the ABCs are grounded in a ring around the Gateway command. Megabyte is standing before the empty ring. On the opposite side of the ramp Herr Doktor and Bunnyfoot are working at a control panel. Megabyte urges Herr Doktor to activate the Gateway quickly. The Gateway finally activates with a silver shimmer in the center. Herr Doktor targets the Super Computer. Megabyte takes one look at his small army and then steps through the Gateway. Then he comes out the back side, realizing the Gateway didn't transport him out of the system he yells at Herr Doktor for an explanation. Suddenly the back hatch of one of the ABCs opens showing Bob, Matrix, AndrAIa, Frisket, and a CPU team. Matrix targets Megabyte and a small fight ensues. They finally catch Megabyte in a small tear, Bob turns it into a portal to their prison. Inside the Principal Office's prison, Megabyte asks where the real Gateway is. Bob tells him it's in the safest place. Megabyte figures out the only safer place than the Archives is the Core Control Chamber. Megabyte asks if he'll be deleted and Bob tells him no, just scanned for he doesn't believe in deletion. Megabyte will be reprogrammed into a sprite. Megabyte hates the idea of not being a virus anymore, saying "And they call me a monster."

When the scan is finished Bob checks the data. There's no information from the scan. Matrix makes him drop the firewall encasing Megabyte, grabbing the virus and ramming him into the wall. Megabyte shimmers and starts to break up. Bob realizes it's an alias, like a hologram, the real Megabyte isn't there. Matrix asks where he is and Megabyte says "Guess" as Matrix shatters the alias.

Bob quickly calls the War Room warning Dot that someone in the War Room is the real Megabyte. Frisket shakes and turns into Megabyte who quickly begins attacking everyone in the room. Using his tendrils he infects several CPU guards. Megabyte turns toward Hack, Slash, Dot and Mouse. Dot looks toward Little Enzo screaming for him. Hack and Slash seize Dot by the arms and drag her back through a door closing it behind them Mouse draws her katana and cuts Megabytes tendrils as they attack her, he withdraws them in pain. AndrAIa and Mouse turn to run through the door but Megabyte shots his tendrils at them again. Phong jumps in the way of the tendrils, he is hit and falls to the ground hard. He sees Welman carrying Enzo under one arm running out a door. The door begins to close but two cables strike the doors, stopping them while a third stabs the middle of Welman's mechanical suit making him drop Enzo. The suit turns viral blue.

Hack and Slash drag Dot down a corridor. She fights them off. They panic and yell "What's the plan!" Dot yells, "Boys, shut up and let me think!" In another corridor, Mouse taps at a control panel. AndrAIa stands guard while she works but the screen continues to show "access denied".

Matrix and Bob run down a corridor as Megabyte's voice comes over the intercom. Megabyte says, "Attention! As you are no doubt aware, the Principal Office is now under my complete control." The War Room is now blue covered with snaky cables and viral CPU officers running panels. Little Enzo is being held by his viral father. Megabyte is talking to the entire city via VidWindows and continues, "You're probably looking forward to one of my erudite speeches about me, Megaframe, the new viral dawn, et cetera et cetera. But I'm afraid I'm going to have to disappoint you. There is no grand scheme here. This is about revenge. Viruses are predatory by design, and it is time for me to follow my function. Prepare yourselves... for the hunt!" 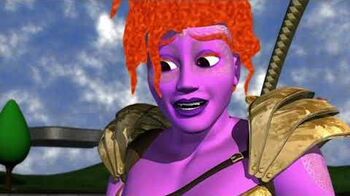 Retrieved from "https://reboot.fandom.com/wiki/Crouching_Binome,_Hidden_Virus?oldid=18917"
Community content is available under CC-BY-SA unless otherwise noted.