Daemon is sitting on her throne in the Master Clock when Mike the TV starts to sing a song to her with a Guardian choir. When the song is finished Daemon gets up and walks between two rows of Guardians, each holding a large egg-shaped object. As she touches them, the orbs, called seeds, change from purple to viral green.

Matrix and AndrAIa race through a system firing Firewall senders at the edge of the hole to the Net. They go through and activate the Firewall behind them.

In the War Room, the map shows many nodes connected by lines. Most are green, but as Bob speaks the nodes change from viral green to the normal blue color. So far, Daemon has only been controlling the pathways, not infecting entire systems. By closing off a major hub, they've protected all the pathways and Systems beyond it. Mouse is confused about how they've managed to "close the door" on Guardians and why they're not creating portals, but a distracted Dot says she doesn't care as long as it's a weakness to exploit. She tells the others to keep Little Enzo in the Read-Only Room while she checks on the latest development of the Null Cocoon.

Dot stops the CPUs from shooting at the Null mass and tries to speak to it.

Flashback: Professor Wellman Matrix at the podium in an auditorium, Dot with clipboard checking lighting cues, and young Enzo and puppy Frisket bounding through the seats. Dot is helping her father go through his presentation on his new invention, the Gateway Command, which will allow them to search for other systems and people. By sending 'pings' into cyberspace, they locate and lock on to energy bursts, which will allow the Gateway to lock onto them and link with the system he believes are out there. The Gateway has two functions, search and link. Wellman, easily flustered and disorganized, has Dot promise him she'll be by his side just in case.

Present: Down in the Read-Only Room, Little Enzo has been slurping down energy shakes and eating Screaming Spicy Hot & Fast Micro Chips, watching the Mainframe Strolling Players re-enact the fight between Enzo and the User in the Gods, Mortals, and Demons Game. Hack and Slash are so wound up in the story that they are crying. Little Enzo reminds them that it was OK, he turned into Matrix. Slash realizes this is true, "he saved Mainframe and got rid of Megabyte", causing a terrified Hack to gag him to stop him from mentioning "that name". Phong greats "young Enzo", who gets upset about this after seeing all the things "I've done", and declares that he will not be known as 'Young Enzo' or 'Little Enzo' anymore. From now on, he wants to be known as Little Matrix. Changing his clothes to look exactly like Matrix's.

A lone Guardian ship crashes in the Satellite System, pursued by Matrix and AndrAIa. The Guardian pilot emerges, carrying one of the seeds to the system's Principal Office. She stops at the edge of the Energy Core and states "you can't hurt me. The Word is with me, always." When they step too close she throws herself into the Energy Core, deleting herself and leaving the seed floating in the energy.

Back at the Super Computer, Daemon is informed that Mainframe has sealed off another hub, blocking her from Systems that have not yet been seeded. Only Bob can help her now, and she orders Daecon to bring Matrix and AndrAIa to her.

Bob stumbles into his apartment, expecting to be fine after accessing some energy. But he collapses next to his car, which has been painted blue and supercharged. He does not notice the flashing on his wrist chrono, signaling that it is time to create the next portal.

In the Desert Port System, Matrix and AndrAIa find an open system with a trashed port "just like the last two". Their portal back to Mainframe is supposed to appear down by loading bay #2, but AndrAIa suddenly detects an energy build-up in the System's Control Tower. It is still functioning and the system's a trap. A blast from the Tower closes off the system from the Net, leaving them trapped in the system with four Guardian ships incoming.

Back in Mainframe, an incoming Game Cube descends on the Kits Sector. Dot abandons the null mass to check on Bob. Mouse leaves Dot's Diner to go catch up with Little Enzo before he can reach the Game Cube after getting Cecil's attention by slicing his bow tie.

The Game is an Egyptian Tomb Game. Inside Bob is in no shape to fight, but the Glitch part of him can access the Game stats. The User is raiding a tomb below and heading for the Scroll of Life. Dot reboots, and is a little disappointed to be an Egyptian Queen, "I was hoping for a pair of 45s." Bob attempts to reboot but is knocked flat. She puts him in a sarcophagus for safe keeping. After dodging the User's bullets, she notices a brick in the floor with an 8-ball on it. "Eight ball, center pocket." The giant billiard ball knocks the User back down a level.

Mouse dumps Little Enzo into the War Room. Phong lists the problems they are having, and Mouse brushes them aside, except for the fact that they need Bob to create a portal for Matrix and AndrAIa. With no portal at the designated point, AndrAIa's bike crashes and is destroyed, and they're forced to take refuge in a warehouse. Outnumbered 78 to 2, AndrAIa still tells Matrix they can't kill infected Guardians and don't need to, as she just found a pair of Exoskeleton Suits.

Dot confronts the User face to face. She starts sucking the life out of him, but he places an ankh against her forehead, sucking the life out of her. Just before the User reaches the Scroll of Life, a mummy wrapped in white bursts onto the scene and kills him ending the Game. The white mummy was a changed Hexadecimal, she's all gold and white and has no memory of the Null cocoon. Dot asks Hex to take Bob to the Portal Generator. She tries, but nothing happens. She's lost all of her powers and has to drive Bob's car.

Matrix and AndrAIa emerge from the warehouse wearing the exoskeleton suits, ready to fight the Guardian Soldiers. One of the Guardians removes his helmet, revealing that he's in fact Turbo. He's succumbed to the infection. Matrix grabs him and tosses the others aside. As Matrix confronts Turbo and is told the Word can bring him peace and provide an end to the constant fighting, he does not notice an incoming Zoom Room, but AndrAIa does. As the portal to Mainframe arrives, she knocks Matrix and Turbo through it but is herself caught by the Zoom Room and taken to the Master Clock in the Super Computer.

AndrAIa attempts to strike Daemon but the suit is disabled and she is infected by a single touch. Daemon says she has arrived just in time and rises into the air, shooting out green energy that spreads throughout the Super Computer and out into the Net. It triggers every single seed in every system, causing them to explode and infect the systems they are in. 92% of the Net turns viral. "What are we going to do?", asks Phong. Dot goes silent. 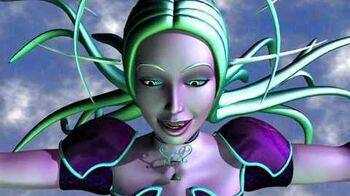