Between a Raccoon and a Hard Place

The story opens on a poster of Enzo Matrix the Guardian crosseyed with the words Guardian Schmardian painted across it. The camera moves through dark streets and sitting in the middle of a sector is a Game Cube with many binomes running in terror from it. It seems that neither Dot or Enzo made it to the cube in time, the sector is doomed, the camera turns towards the Principal Office.

Where Enzo is claiming that he tried to get to the game cube but Megabytes troops prevented it. Phong tells Dot and Enzo that Megabyte had done this once before and Bob had no way of preventing it either. 'Game over, the User wins'. Enzo screams.

Inside the Principal Office Dot tells a couple of binomes to get to the pit where the sector has been destroyed, but Mouse discovers that Megabyte is sending in a team of ABC's to take control of the area. There are not enough CPU forces available to help.

At the sector some binomes are sifting through the rubble, picking up a blue cuddly teddy from a pile of rocks. Surrounded by ABC's Megabytes vid window pops up claiming that as of now the sector is under his control and all the binomes must hand their PID's to him. A Jean-Luc binome claims '....We are tired of living in fear, the line must be drawn here.' Meagabyte tells an ABC tank to delete him. His smoking boots are seen as Megabyte claims '...resistance is futile'. They all hand in their PID's as Megabyte laughs his evil laugh.

Elsewhere Cyrus is seen posting up the 'Guardian Schmardian' Propaganda, to divide the binome population and conquer them. Phong has an idea to make Enzo a game hero, a hero to lead them out of the darkness. Dot says that Phong is suggesting that Enzo plays a game on his own, which he hasn't done before. Mouse tells Dot that she must stay in the Principal Office while Mouse takes care of AndrAIa and Enzo in the games. Phong tells Mouse that neither Mouse nor AndrAIa's icons are formatted to enter Games. Mouse uses a workstation to configure AndrAIa's back-up which changes to a reboot symbol. She is not sure whether it will work or not. Now they are ready to enter a Game.

Dot and Phong are formulating some form of plan to get Enzo to the game without being intercepted. Dot tells Phong that Megabyte will never be able to get to the supercomputer with Bob gone. Phong tells Dot 'Bob has effectively locked them in the cage with the tiger.'

Megabytes troops are ready for the next Game. Megabyte tells them not to harm Enzo. Two of Megabyte's binomes pick up a scanner trace of two sprites leaving the principal office. It's Dot and Enzo. They order the ABC's to close in as the Game Cube descends. As they reach Dot and Enzo it is revealed that Dot and Enzo are cardboard cutouts held up by binomes on zip boards. Suddenly the sky is filled with Dots and Enzos, and amongst the scuffle, Enzo (as Dot) AndrAIa (as Enzo) and Mouse (as Dot) drop their disguises and head towards the Game Cube. AndrAIa fools Mouse into thinking that her zip board power is failing and in the process takes Mouse's board away, and follows Enzo into the Cube. Leaving Mouse on the outside.

Inside the Game Cube, AndrAIa and Enzo are greeted by a hillbilly prospecter binome in a sort of cartoon desert location. The binome recognises Enzo, and tells him he's only a kid.

Meanwhile, Megabyte is visiting Hexadecimal where she is being repaired. The modifications include a collar which allows Megabyte to control Hex whenever he wants, and proves it by activating the collar and making Hex fall to her knees when she wishes to walk away.

AndrAIa tells the binome that Enzo has Bob's Key Tool (which is broken) which can tell them the Game status. The binome tells Enzo to use his eyes, and to turn around to look at a blazing sign which says, 'Rocky' 'The Rabid Raccoon' It's Reboot time, AndrAIa becomes a biker babe, while poor Enzo ends up as a large headed hunter with a shotgun and a speech impediment, 'Oh, wight, I'm a Guardian now, am I?' Out from a distance comes a mad looking raccoon who bounces around the desert from rocks to cacti. Pulls a face, spots AndrAIa and proceeds to give her a very wet and unpleasant kiss, much to her disgust. He disappears off into the distance; 'He's too fast', exclaims AndrAIa, Enzo tells her to be 'Be vewy vewy quiet, I'm hunting waccoons.' He fires and through a convoluted manner rebounds off objects, drains petrol pumps and eventually explodes a box of fireworks, which fires into the sky, hitting a passing bird, turning it into a roasted bird which falls onto the head of Rocky, who is then run over by a train which appears from nowhere. One life gone.

Mouse explains to Dot that AndrAIa stole her Zip Board. Phong says that AndrAIa would never harm anyone because she loves Enzo. Dot says she's running out of plans.

Enzo, AndrAIa and the Hillbilly binome head on a motorcycle down the desert highway. With Rocky in pursuit, he steals the bike causing the bunch to fall. Rocky heads for a missile silo, fires the missile and heads to level two through the silo hole. The missile heads skywards then heads back. Enzo claims that they need to head from the level, before they get blown up. They look over the edge of the level to levels below and jump into a tree, where they are greeted by a couple of binomes in black country style clothing. AndrAIa knocked out the hillbilly binome before heading down, and whilst he is lying on the ground the female binome tells Enzo, 'You're not like Bob are ya, When Bob rescues you to stay conscious for sure.'

Meanwhile, Rocky is hitting moles over the head with a large hammer as they pop out of holes. 'Frustrating ain't it?' He heads down to a bonus level to get a life point.

Down in the bonus level they are trying to get the life point coin before the raccoon, above their heads a manhole cover opens and a hose is dropped by AndrAIa. They grab a hold and are pulled upwards leaving Rocky to be beaten up by a bunch of skeleton binomes. Two lives down, one life to go.

In a subway level Rocky is searching for food to replenish his energy. He finds a food machine with 'Java' written on it, guarded by a Rasta binome singing for his own supper; 'Raccoon searching high and low - For the food to make him go - If I catch him in my trap (whips out a machete) Gonna make me a raccoon hat!' Rocky runs for it.

An unguarded machine labeled 'Mashed Potatoes' is unresponsive - perhaps sabotaged. Another machine labeled 'Cup of Pork' is guarded by a binome in a long coat - a flasher who opens his jacket, letting something unseen hit the ground with a resounding thud. This sends Rocky running to the streets above, where a mob of binomes are waiting with pitchforks and other makeshift weapons. They drive him into a back alley - where he is quickly trapped in fresh tar. Enzo and AndrAIa smugly appear driving a steamroller and flatten Rocky. Game Over.

Out of the game Enzo is surrounded by the binomes involved in the Game, but can't immediately see AndrAIa fearing that her icon has kept her in the game, but luckily she is behind him. Above their heads a team of ABC's have appeared, Enzo faces them and they fly away. Behind Enzo is a large team of CPU carriers, which reveal themselves to be binomes with cardboard carriers standing on zip boards. Enzo tells the crowds, 'Megabyte will be vewy, vewy angry.' 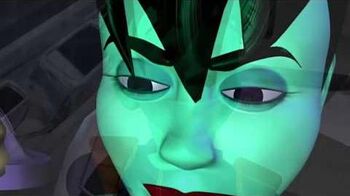