Outside Dot's Diner, Bob is arriving in his car, until it breaks down three steps from the door. A biker woman binome makes a remark about classic cars, and Enzo pulls up in his new air cart. Dot emerges from the Diner and starts chewing Bob out for telling Enzo tales from the Super Computer, while the biker woman fixes Bob's Car. Bob and Dot get messages that the Principal Office is under attack by Megabyte and they can't hold him off. Bob takes his car to the Principal Office, and Dot says she'll handle tactical from the Diner.

At the Principal Office, Herr Doktor has an ABC fire on the Sub-Sphere deleting it. The explosion releases energy from the Core into a Transformer piloted remotely. Megabyte tells Lieutenant Chauncy that the ABCs must hold the CPUs off at all costs, but they are having a tough time of it. Bob arrives in his car and makes trouble for Hack and Slash.

While Megabyte is taunting Bob, a Game Cube is announced; however, the System Voice's warning is oddly distorted: "Warning, In-In-In-In-Incoming Game. Warning, Incoming G-G-Gaaaaaame." The Cube distorts and moves away from where it was landing, attracted to the stolen energy. Enzo arrives in his air cart and knocks Megabyte into the pool of energy. The Game Cube finally lands on the energy, covering half of the Principal Office. The Cube continues to distort, unable to hold its shape.

The Game is a Road Warrior Game. Bob reboots, biker-style, wearing leather and studs. He jumps into his car and drives off. The Principal Office sets behind him, burned and blackened. Phong pulls up beside him in a gyro-copter and explains that the Game has been corrupted; the stolen Core Energy is trapped inside the Game, so if either Bob or the the User wins Mainframe is doomed, and Mainframe's energy will leave with the Game, crashing the system. Phong is working on a solution, but first Bob needs to go find Enzo, who is in the Game and is trying to defeat the User.

Outside of the Cube, Dot has assumed command of the city in Phong and Bob's absence. She has ordered the city to begin evacuation to ensure some people safety. Dot consults Number One on the condition of the Game Cube; he tells her that anything can happen when a Game is corrupted, and worse, he has calculated twenty million nano-seconds until the stolen energy dissipates and Mainframe will be offline.

Meanwhile, Enzo is trying to beat the User, a low black car. He runs into trouble, however; Mainframe's energy is being towed by Megabyte. who has been turned into an eighteen-wheeler truck as a result of being combined with the energy. Enzo drives off to find Bob, whose car has broken down - again. Bob is picked up by Enzo and is brought to the Megatruck, where he boards and takes over from Herr Doktor. He manages to turn the truck around just in time and head back toward the Principal Office while Enzo and Frisket try to keep the User off Bob's tail. Phong helps Enzo get Frisket to the User and keep him from moving by holding onto his back bumper.

Outside the Game, Megabyte tries to take his revenge but is met with an angry Dot Matrix and an entire squadron of CPUs. Megabyte begrudgingly leaves. Dot is angry with Bob for taking Enzo into the Game, but Bob thanks Enzo for his help in secret because without the little sprite, all would have been lost. 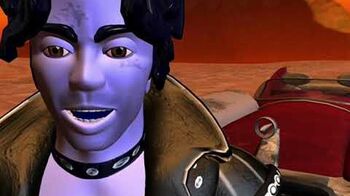