Enzo sits in Dot's Diner, watching a bad TV show on Mike the TV called "True Stories of Mainframe", while Dot is trying to convince him to go play outside. Enzo claims he can't because he doesn't have any friends. Dot is always too busy and Bob is in a Game Cube. Dot has denied Enzo the privilege to go into Games by himself because Games are very dangerous.

Inside the Game, they are playing a Space Race Game. Bob is flying through an ice cave. Jean-Luc and Captain Quirk are in the Game as well. They are in dire straits and the binomes seem to think they know more than Bob. The two binomes activate an explosion that will destroy the ice planet. They win the Game, barely, and Bob goes to the Diner.

In the Diner, Bob chews the binomes out for their near-deletion experience. Enzo tries to bowl him over but Bob moves out of the way to further chew out the binomes and Enzo flies past him, crashing into a wall. Dot consoles Bob, suggesting he give a talk on Games for the information of the citizens. Bob agrees, then Dot asks him to help her with Enzo, who is still depressed about the fact that he has no friends. Enzo blames his and Dot's father for nullifying all the Sprites, many of whom could have been his friends. This worries Bob and Dot, and makes Dot sad for the loss of her father and Mainframe's Twin City.

Bob gives his talk at the Principal Office calling it "Games: A Survivor's Guide." The auditorium in the Principal Office is packed with Binomes and numbers, including the Secretary and Number Nine. Afterward Dot and Bob talk to Phong about Enzo's need for a friend. Phong proposes he construct a robot friend, but Dot says Enzo needs a real friend. The system voice announces an incoming Game Cube. Phong informs them the Game is going to land on the Diner. Dot and Bob race to enter it.

At the Diner, Cecil and everyone except for Enzo is getting out of the Game's path. Bob and Dot get their just in time as the Game lands. Everyone is under water. Enzo quickly reboots in an angelfish submarine.

Bob and Dot reboot as merfolk. Bob has Glitch check the Game stats, the Game is the Treasure of Atlantis, the User must find the treasure. It's their job to stop him. They immediately begin to fight the User, a Shark submarine, but find out the hard way that it has multiple lives. They change their tactic in trying to stop it, and try to go after the sunken treasure instead. They do manage to slow the User down, however.

Enzo meanwhile has saved a cute young female Game Sprite from being deleted. He didn't realize that she is a Game Sprite. She introduces herself as AndrAIa, and they get along very well. Enzo told her he is a Guardian, and AndrAIa joins him as the sub's navigator.

On their way to the treasure, Bob and Dot swim into red waters where they encounter a group of large hungry sharks. Dot manages to fight off one with her trident, while Bob extends his arm spikes to fight them. One shark takes him on and just as he tries to eat him, Bob slices the shark down the middle, cutting him in half. The rest of the sharks flee in fear. However this clears the way for the User, whom head straight for the treasure with Bob and Dot close behind.

Enzo and AndrAIa navigate the waters and come to the entrance of the cave containing the treasure, but not before they collide with the User, causing their sub to take on water, and the User to regenerate.

Bob and Dot swim feverishly toward the treasure. They nearly make it, but a hidden huge octopus grabs them with its tentacles.

AndrAIa sees this and renders Enzo unconscious with her spines. He loads him into a torpedo after having copied her triangular back-up onto his icon. She shoots the torpedo into the treasure, winning the Game.

Dot and Bob realize that a game sprite saved them, and are baffled as game sprites are usually not to be trusted. They notice AndrAIa's back-up over Enzo's and click it. AndrAIa materializes in blinding light and explains how she wanted to be with him. The Game let AndrAIa out thinking she was Enzo because her back-up was on his icon. Now Enzo has a friend to play with. 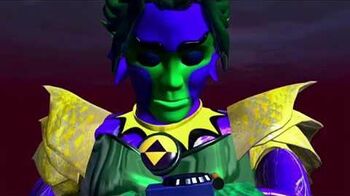